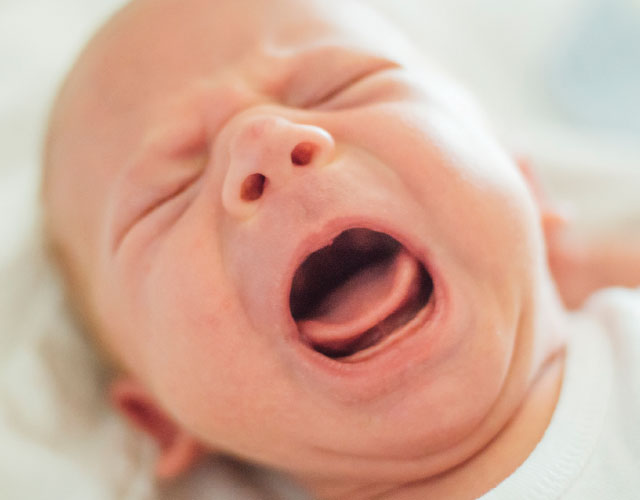 PICK ME UP! There are remarkable consistencies across cultures in mothers’ behaviors and brain activities when responding to their babies’ cries.© ISTOCK.COM/kaisersosa67

When the Voyager I spacecraft left Earth in 1977, it carried with it a “Golden Record” containing audio recordings of messages meant for any intelligent life that might cross its path. It bore sounds from around the world, including greetings in 55 languages, Chuck Berry’s “Johnny B. Goode,” and a fussy baby being soothed by its mother. According to Marc Bornstein, a developmental psychologist at Eunice Kennedy Shriver National Institute of Child Health and Human Development, Carl Sagan and other members of the committee who decided what to include on the record were spot on in picking the latter track. “Infant cry is . . . the very first communication between an infant and a caregiver,” Bornstein says.

“Within five seconds, the predominant kinds of responses are picking up and holding and talking to the baby,” says Bornstein (PNAS, 114:E9465-73, 2017). The degree of uniformity surprised him. “People in Kenya and Cameroon . . . the mothers are growing up and have been reared in wildly different circumstances than mothers in Brazil and Argentina or the United States, or certainly than Japan or South Korea.”

Bornstein and his colleagues next looked at regions that became more active in the brains of mothers in response to their infants’ cries to see whether they matched across cultures, too. They put women in the U.S., Italy, and China into fMRI scanners and imaged their brains as they listened to their babies’ cries, and then compared those results with brain scans made when the mothers heard other sounds, such as infant babble or an adult crying.

The results were consistent: hearing her own baby’s cry tended to increase activity in a mother’s supplementary motor area, which is associated with the intention to move or speak, and in the inferior frontal regions, signaling the intention to speak. “The really interesting aspect is the common brain regions that are sensitive to baby cry across cultures,” says Pilyoung Kim, a developmental psychologist at the University of Denver who was not involved in the study but has collaborated with some of its authors. “I thought they did provide strong evidence that there are some common responses to the baby cry, both in behaviors and the brain activation.”

Devanand Manoli, who studies the neural basis of social behavior in prairie voles at the University of California, San Francisco, says that this uniformity extends, to some extent, to our evolutionary kin. While there is a considerable amount of species-specific variation, he says, researchers have turned up reproducible patterns in the behavior of primates, rodents, and even some bird species in response to vocalizations from their offspring.

The behavioral findings reported by Bornstein’s team “really speak to the fact that, like in other mammals, there are pretty hard-wired responses” in humans, Manoli says. The specific brain regions that respond to infant cry, versus other types of sounds, also support the idea of hard-wiring, he adds. “The behaviors that are elicited in a more invariant way tap into the parts of the motor system that are closer to behavior and closer to actual action, as opposed to other types of vocal gestures, or vocalizations, that involve parts of planning and parts of interpretation, which is where you would see the cultural variation.”

For Bornstein, it’s not a surprise that responses to infant cries appear to be largely innate. “In order for the next generation to survive, it’s the caregiver’s job to respond to [infant] cry and meet the needs of that cry,” he says. “The notion is that evolutionarily, these two systems, the infant cry and the caregiver response, have developed together to ensure the survival of the species.”

One omission from the study is, of course, dads. Bornstein says he plans to include men in similar studies in the future, building on established differences in male responses to infants. For instance, “if there’s an infant cry, women’s brains shift in attentiveness faster than men’s brains do,” he says (NeuroReport, 24:142–46, 2013). This pattern dovetails with “a broad tendency across more than 100 societies for babies to be taken care of by either mothers or grandmothers or older sisters relative to fathers or brothers.” One question he’d like to explore, Bornstein says, is, “How early does this pattern of brain responses appear in women versus men?”