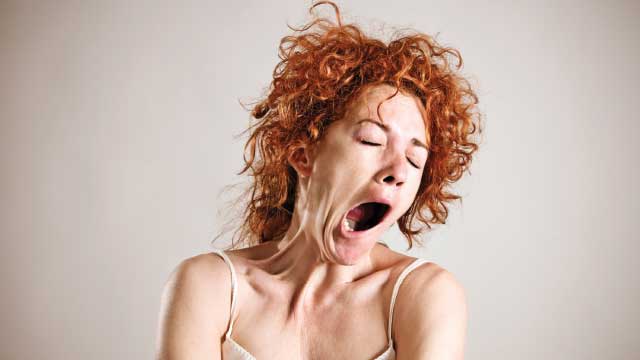 YAAAAAAAAWN: Might the relationship between yawning frequency and cortisol levels be a hallmark of diseases such as multiple sclerosis?© ISTOCK.COM/MERBE

Bournemouth University neuropsychologist Simon Thompson is an expert on yawning. In 2011, he posited that high levels of the stress hormone cortisol may be a direct cause of yawning. “We believe that cortisol levels rise sufficiently to trigger a yawn for the purpose of lowering brain temperature,” he says.

The idea became known as the Thompson cortisol hypothesis (Interact J Med Res, 1:e4, 2012). Linking yawning with fatigue, cortisol, and brain temperature, the hypothesis is ideally suited to being tested on people with multiple sclerosis (MS). Patients with the neurodegenerative disorder often report frequent yawning. They also suffer from fatigue, which has been associated with elevated brain temperature (Neurology, 86:P2.172, 2016).

Up to now, experiments to test the hypothesis have only been conducted on...

A couple of months ago, I found myself alone in a small, windowless booth on the leafy Bournemouth campus in Poole, U.K., southwest of London. Three electrodes stuck to my beard along my jawline recorded electrical signals from my facial muscles while I sat in a chair in front of a computer. Following a quick spit into a test tube to measure my baseline cortisol levels, the experiment began. On the screen, a woman repeatedly yawned. Normally, this kind of image would trigger a yawn immediately, but for some reason, I resisted. And then, right at the end of the 3-minute video, a yawn of epic proportions escaped my mouth.

Thompson rushed into the room holding a small plastic tube to spit into. He explained that he planned to compare my cortisol levels from saliva samples taken before and after the experiment. But I couldn’t spit. Suddenly I was in the midst of a yawning frenzy that felt like it would never end. Eventually, the waves of yawning subsided long enough for me to spit into the tube, and the test was over.

After squirreling away my sample next to my pre-test spit in a bag to send to the U.S. for analysis, Thompson showed me how he tries to coax a yawn from participants whose minds or bodies stubbornly refuse to yawn in response to the video of the woman. First he tries a series of pictures of yawners, from babies to the elderly, and if that doesn’t draw out a yawn, he has participants read a few paragraphs of dry technical text all about yawning.

We’ve underestimated the reason for yawning by saying that it’s just to get oxygen into your system.—Simon Thompson,
Bournemouth University

All of these tricks worked well on me, but apparently do not on everyone: of 82 healthy volunteers, about half didn’t yawn at all (J Neurol Neurosci, 6:1-15, 2015).

What the data did clearly show was a significant difference between yawners and non-yawners. The cortisol levels of yawners rose significantly more than those of non-yawners. In addition, the yawners had higher resting levels of cortisol and higher electrical activity in their facial muscles than those who didn’t yawn.

Other researchers are also turning up evidence supporting elements of Thompson’s cortisol hypothesis of yawning. Brain temperature rises during bouts of fatigue; people yawn when they’re fatigued; people also have high levels of cortisol when they’re fatigued; and high levels of cortisol have been recorded in clinical conditions associated with fatigue, such as Cushing’s syndrome. “We’ve had support for different parts of the loop but not directly between cortisol and yawning,” Thompson says. “So it’s just linking that all together.”

The field of yawning research is still rife with competing theories and contradictory evidence, however. “I think that [Thompson’s] hypothesis is true but only forms a very little part of the puzzle,” says yawning expert Olivier Walusinski. “Cortisol is one among many other neuromediators involved in this behavior.”

Thompson is determined to bring the cortisol hypothesis closer to a full-blown theory. His most recent study used functional magnetic resonance imaging (fMRI) on 13 healthy French volunteers to illuminate how cortisol varies during mental and physical tasks, and how cortisol acts on specific brain regions such as the hypothalamus (J Neurol Neu­rosci, 7:92, 2016). Thompson’s next experiment will also use MRI, but the participants will all have MS. “It would be good to get a picture of whether people with MS have completely different cortisol fluctuations from people who don’t,” he says.

What about better-established theories of yawning, like the idea that a big morning yawn stretches the rib muscles to allow the lungs to get more oxygen? Might MS sufferers just require more air in their lungs? “We’re not saying that yawning is not to do with oxygen,” Thompson says. “We’re saying we’ve underestimated the reason for yawning by saying that it’s just to get oxygen into your system.”

Central to his argument is fatigue. Whether the result of just having woken up or of having MS, fatigue means lower oxygen saturation in the blood and a higher brain temperature. Thompson reasons that, far from competing with the oxygen explanation, his work expands upon it. Similar to his idea that yawning lowers brain temperature, taking oxygen in lowers body temperature. “So it all could be linked,” he says.

Ultimately, Thompson hopes to develop a diagnostic for MS and other neurological diseases based on the connection between cortisol and yawning. But that will take time and resources.

“We don’t want to give false hope to people—so far, we’ve only done this on healthy people, and the potential for the clinical population is theoretical,” Thompson says. “But we’re confident something good will come out of it.”