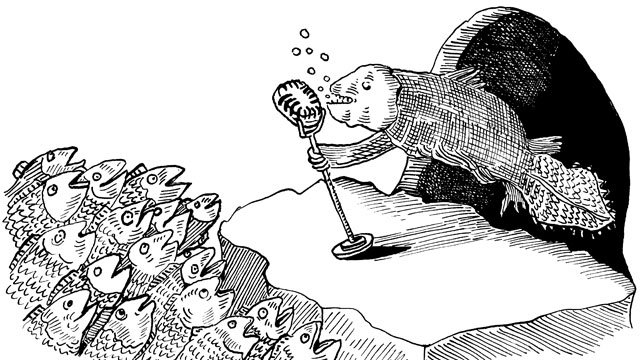 Several years ago, ichthyologist Eric Parmentier met a French marine biologist and filmmaker, Laurent Ballesta, who was organizing an expedition to South Africa to produce a documentary film on the coelacanth. This ancient fish—one whose fossil record dates back at least 350 million years—has an almost mythical legacy. Although it was widely assumed to have gone extinct 65 million years ago, a live specimen was found in 1938, and scientists have identified two extant species of coelacanth. Both species move in a peculiar way, waggling four lobe-like fins in an alternating pattern, as we do our arms and legs. Their anatomy is also unusual: a tiny brain, a joint at the back of the head that allows the animal to open its jaws widely, and only rudimentary vertebrae. Ballesta’s trip inspired Parmentier, who studies fish acoustics, to collaborate with the team. “I hoped to be the...

Parmentier, a morphologist at the University of Liège in Belgium, has traveled the world to understand fish sounds. When I spoke with him, he was between trips to Taiwan, Corsica, and Chile. But for this 2013 South African expedition to capture images and audio of coelacanth, he was going to leave the recording to the film crew’s divers, as it involved installing equipment in a cave whose mouth lies more than 100 meters below the water’s surface.

In the spring of 2013, the divers successfully planted a hydrophone inside the cave and also shot video footage of a coelacanth. (The resulting documentary by Ballesta is available on YouTube. Although it is in French, the footage obviates the need for fluency to enjoy the film.) Day and night, for weeks, the hydrophone dutifully recorded the sounds within the cave. When Parmentier retrieved the files and went to analyze the recordings, there was one big problem: it was filled with dozens of different fish calls. “Maybe the coelacanth is in these sound files, but it’s completely masked by the other sounds,” he says.

Soundscapes are important for fish to be able to communicate with each other.—Craig Radford,
University of Auckland

Nonetheless, the tape captured ceaseless, never-before-heard chatter among the aquatic organisms within the cave (PNAS, 112:6092-97, 2015). To make some sense of it, Parmentier’s team undertook the laborious task of characterizing the sounds recorded over 19 nonconsecutive days (to make this feasible, the group pared down its analysis to the first nine minutes of every hour). The researchers assigned more than 2,700 sounds to 17 groups, most of which sounded to Parmentier like fish (one group was clearly dolphin, based on its high frequency, he says). These included frog-like croaks, grunts that sounded like a creaking door, a moan, and one that sounded like a whistle blown under water. “It’s fair to say, based on the characteristics of the sounds they were hearing, they are probably fish sounds,” says Erica Staaterman, a postdoc at the Smithsonian who studies fish acoustic communication.

Fish have come up with a variety of ways to make sounds. They may rub their bones together, grind their teeth, or rapidly contract muscles connected to their swim bladder. Staaterman says fish can use these sounds to defend a territory or attract a mate. Craig Radford, a fish biologist at the University of Auckland, studies a bigeye species (Pempheris adspersa) in waters near New Zealand that makes a click sound similar to one Parmentier recorded in the South African cave. Radford’s group has found that when the bigeyes leave their daytime hideouts to feed on plankton at night, they produce the click sounds to maintain the structure of their schools. When the calls are frequent, the school is tight-knit, and when there are fewer clicks, the school disbands (J Exp Biol, 218:940-48, 2015). “Soundscapes are important for fish to be able to communicate with each other,” says Radford, but also important for them to understand their environment.

The function of all the sounds in the South African cave is anyone’s guess, but it’s not pure chaos. Parmentier found some organization to the noises. In particular, the frequencies overlap less at night than during the day (despite its being an underwater cave, he says, there is still light available). In other words, the night sounds are more distinct from one another than those produced during the day. “The hypothesis is that during the day, the songs could be there just to support the visual displays,” says Parmentier. “Of course, during the night it is not possible.” Without light, sounds become  more important.

David Mann, the president of Loggerhead Instruments, which makes underwater recording equipment, says there have been plenty of studies on acoustic niche partitioning among other animals, birds in particular, but such partitioning in the acoustic environment of fishes is a new observation. “I don’t think anyone had seen that before,” he says, adding that it will be important to test whether this also occurs in other settings, such as coral reefs.

The day/night structuring of the acoustic soundscape in the South African cave is a good hypothesis, says Arthur Popper, a professor emeritus at the University of Maryland, but there’s just one thing missing: the hydrophone didn’t actually capture the type of sounds fish hear. Unlike our ears and hydrophones, fish ears don’t detect sound pressure, which is the compression of molecules. Instead, they perceive something called particle motion, the tiny back-and-forth movements of particles in response to sound waves. “What [the group] should have done is also measure particle motion to get a better sense of what the soundscape is for local fish,” says Popper, adding that to do so is complicated and extremely expensive. Radford says it’s likely the fish are able to hear the sounds picked up by the hydrophone. Laboratory studies have shown that fish can hear calls in these frequencies.

Popper says there are a great number of unknowns about the underwater soundscape—little is documented about what’s out there, let alone how sounds, both natural and man-made, affect aquatic animal behavior. Staaterman, for one, is working on the basics, measuring acoustic habitats off the coast of Panama and in the Chesapeake Bay to get baseline soundscapes and to observe broad patterns over time. She says there’s so much to explore. “You don’t know what you’re going to find when you put your hydrophone in the water.”