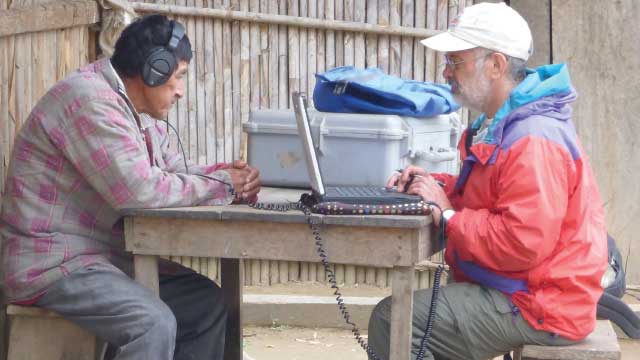 Deep in the Amazon rainforests of Bolivia live the Tsimane’, a tribe that has remained relatively untouched by Western civilization. Tsimane’ people possess a unique characteristic: they do not cringe at musical tones that sound discordant to Western ears. The vast majority of Westerners prefer consonant chords to dissonant ones, based on the intervals between the musical notes that compose the chords. One particularly notable example of this is the Devil’s Interval, or flatted fifth, which received its name in the Middle Ages because the sound it produced was deemed so unpleasant that people associated it with sinister forces. The flatted fifth later became a staple of numerous jazz, blues, and rock-and-roll songs.

Over the years, scientists have gathered compelling evidence to suggest that an aversion to dissonance is innate. In...

“Of course the ambiguity is [that] even young infants have quite a bit of exposure to typical Western music,” says Josh McDermott, a researcher who studies auditory cognition at MIT. “So the counter-argument is that they get early exposure, and that shapes their preference.”

McDermott and his colleagues decided to investigate whether a preference for consonant tones was truly a hardwired trait by testing musical preferences in the Tsimane’, whose limited access to television and radio gives them minimal exposure to Western music.

They asked 64 Tsimane’ villagers how pleasant they found a series of recorded and synthetic tones, and found a surprising result: unlike participants in the U.S., in a nearby rural town, and in La Paz, the capital of Bolivia, they could hear the difference but did not show any preference for consonance over dissonance. Even when the team repeated the experiment with a separate group of 50 villagers using modified versions of their own tribal songs, they found the same results (Nature, 535:547-50, 2016).

During multiple recording sessions with the Tsimane’ musicians, the team learned some of the unique qualities of the tribe’s music that could have contributed to their distinctive musical preferences. “One of the things that’s really interesting about their music is that . . . unlike most other cultures, they don’t do group performances,” McDermott says. “That was one of the reasons why they were an interesting test group for this question, because we had reason to think that they would not have experienced harmony before, at least not in a significant way.”

We know that there are different contributing factors, and we know that musical exposure is important, but we don’t understand exactly how.—Nori Jacoby,
Columbia University

But not everyone is convinced by McDermott and his colleagues. “I don’t think it proves that preferences for consonance are not biologically driven—I think that it probably has a strong biological component, but that doesn’t mean experience can’t overcome it,” says Laurel Trainor, a neuroscientist who studies auditory development at McMaster University in Ontario, Canada. Trainor adds that even in Western cultures, people differ in how much dissonance they like—jazz musicians, for example, are more likely to enjoy dissonant chords because they play them so often.

“I think at the moment the evidence is still in favor of a consonance preference being potentially innate,” says Zentner, who is now at the University of Innsbruck in Austria. “But if this [study] were to be replicated with different stimuli and in other similar remote cultures, it would clearly call this biological theory into question.” But regardless of what future work reveals, he says, the group is doing important work, as cross-cultural studies—especially in remote groups unexposed to Western music—are rare.

McDermott has gone back to the Amazon with Nori Jacoby of Columbia University to see whether there are cultural differences in how we perceive rhythms as well. To reveal the Tsimane’ people’s internal biases, the pair asked participants to listen to a series of random beats and repeat them until rhythms emerged. When they compared these results to those gathered from US participants, they found that people from both cultures shared preferences for the simplest rhythm intervals, such as 1:1:2, where the third beat is twice the length of the first two (one clear example of this is the opening sequence of “Jingle Bells”).

However, some biases intrinsic to Americans were not found in the Tsimane’, and vice versa. These differences corresponded to the characteristics of the cultures’ music. For example, the 3:3:2 ratio, which, according to Jacoby, is commonly found in Western pop music, was uniquely preferable to listeners from the U.S. (Curr Biol, doi:10.1016/j.cub.2016.12.031, 2017).

“We know that there are different contributing factors, and we know that musical exposure is important, but we don’t understand exactly how,” says Jacoby. “One of the things that we are really excited about is to repeat the same experiment in multiple cultures.” For now, the researchers plan to return to Bolivia to conduct further investigations with the Tsimane’. A question Jacoby says he hopes to answer on his next trip is whether the tribe’s rhythmic biases are due to the types of song that the Tsimane’ sing.

McDermott is interested in finding out whether the Tsimane’s preferences change over time, especially as more Western music gets introduced into their villages. “There’s quite a bit of modernization, [and] the Bolivian government is trying to wire up their villages with electricity,” McDermott says. “I think there will be potentially big changes that will happen, which could be interesting to track.”