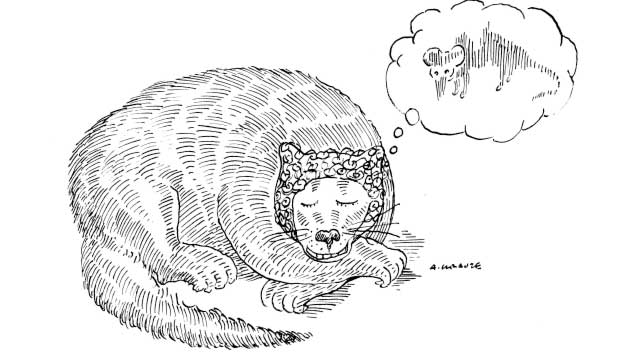 In 1959, two French scientists, Michel Jouvet and François Michel, recorded strange patterns of neural activity in the brainstem of sleeping cats. The brain waves seemed remarkably synced to rapid eye movement (REM) sleep, which University of Chicago researchers had connected with dreaming six years earlier. These new brain activity patterns seemed as though they might also correspond with dreaming.

In the 1960s, Jouvet and collaborators showed that cats with a lesion introduced into that same brainstem area—the pons—exhibited odd behavior. Cats displayed REMs as though they were asleep, while reacting to nonexistent prey or predators, pouncing, or hiding. Humans can also experience REMs while dreaming, hallucinating, or even recalling deeply emotional memories while awake. But do humans also exhibit the same patterns of neural activity—dubbed PGO waves?

The waves are so named because they are generated in a part of the brain stem called the pons,...

Studying PGO waves and their connection with sleep, REMs, and visual experiences requires monitoring deep-brain activity using electrodes poked directly into the deepest parts near the center of the brain, a procedure that rarely passes ethical muster in human research (and then only in the course of necessary neurosurgery). Cats, which have most often served as subjects in PGO wave studies, can’t report experiential aspects of dreams, imagery, or hallucinations required for a complete understanding of the waves’ potential role in creating such internally generated visual phenomena.

Even with these limitations, there have been a few studies of PGO waves in humans. Neuroscientist Andrew Lim and colleagues at the University of Toronto recorded PGO patterns in a human in 2007 (Sleep, 30:823-27). The researchers capitalized on a rare opportunity to record the waves in a 67-year-old patient with Parkinson’s disease who was participating in a study of deep brain stimulation as a treatment method. “We were only directly able to record from the pons, and so only recorded the P component of PGO waves,” Lim says.

A 2009 study used similar methods to record PGO waves in a larger cohort of participants. Researchers in Spain showed consistent PGO-like patterns in the brains of 12 patients with Parkinson’s disease (Sleep, 32:1117-26). “PGO waves, if identified the same way that they were in animals by seminal researchers, can only be recorded in humans with highly invasive methods: opening a hole in the skull and implanting sensors inside the brain,” says Julio Fernandez-Mendoza, first author of that study who is now at Penn State University. “These patients with implanted deep-brain stimulation electrodes opened an opportunity.”

Even with strong evidence that human brains generate PGO waves, the function of these signals remains mysterious. “It is very likely that PGO waves are the electrical brain activity necessary to stimulate the visual processing area of the brain, and that other visual experiences such as hallucinations may have a similar brain substrate,” suggests Fernandez-Mendoza. “I think that this type of deep-brain activity is part of the missing ingredients that could explain the associations found between REM sleep and cognitive and emotional functions.”

PGO waves have been linked with dreaming since they were first recorded in the 1950s. Harvard University professor emeritus Allan Hobson is a central figure in current dream theory. He suggested in a landmark 1977 paper that the study of dreaming was within the realm of neuroscience and a subject for objective investigation—contravening Freudian psychoanalytic theory, which Hobson declared unscientific.

Hobson believes PGO waves provide a key bridge from subjective investigation of dreams to their neuroscientific study, and that this opportunity should motivate the waves’ investigation. “[PGO waves] are probably not just conveying visual information; they are conveying the construction of an internal model of the world inside your head,” he says. “There has to be an internal mechanism for generating such a model. I think PGO waves are a good candidate for such a mechanism.”

Recent developments in noninvasive scanning methods—especially those utilizing magnetoencephalography (MEG)—might help researchers peer deep into the brains of sleeping humans to begin to untangle the role of PGO waves. MEG has both the temporal and spatial resolution for this task. But the use of MEG to investigate PGO waves has been impeded by the extensive computational requirements needed to pick out PGO patterns and localize them accurately. “In principle, MEG is capable of detecting deep magnetic fields that are inaccessible to noninvasive methods such as scalp EEG,” says Lim.

Fernandez-Mendoza predicts that “if the field is able to develop high-resolution, noninvasive methods able to record these electrical neurophysiological signals, that will completely change the way sleep is currently being studied, and PGO waves will start to be almost a standard in human sleep research.”