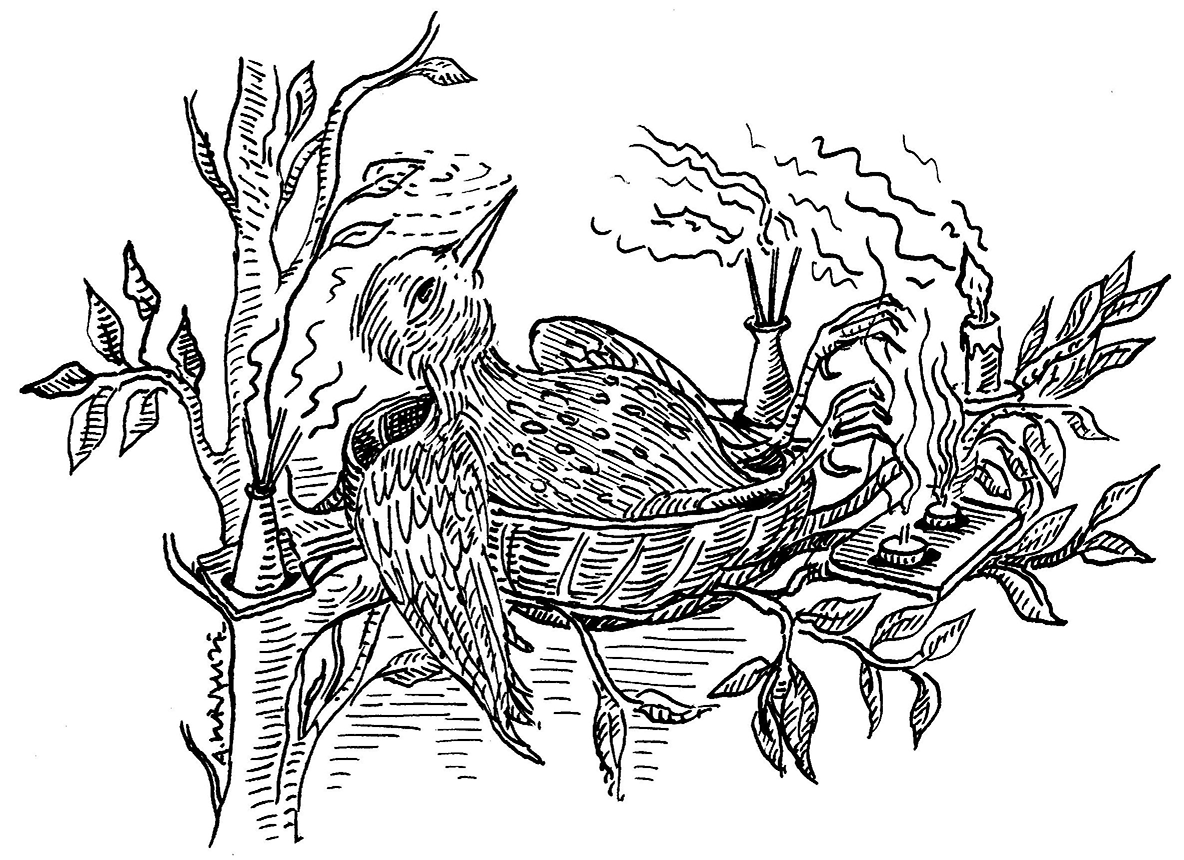 Male European starlings—small, greenish-black birds with a hint of iridescence—may not be much to look at. But they do like to add a little flourish to their nests: fresh herbs. Originally considered a strategy for attracting a mate, the use of aromatics in nest building is now thought to have an additional role in keeping baby starlings healthy.

“People have proposed that the birds add the herbs to their nests because they improve the fitness of their offspring,” says Juan Vicente Gallego Rubalcaba, a biologist at Rey Juan Carlos University in Madrid who studies the adaptive strategies of birds. Indeed, studies have shown that starlings raised in herbed dwellings tend to fare better—having fewer parasites and weighing more—than youngsters brought up in nonherbed nests.

What researchers haven’t been able to pinpoint is how exactly the herbs exert an influence over baby birds’ health. To answer this...

To get to the bottom of the mystery, Gwinner recently set up an experiment to test another hypothesis: that the herbs improve offspring health by keeping eggs in the nest warm. Herbs might provide direct thermal benefits through improved insulating properties, the team reasoned, or through heat produced by decomposition of the material, keeping the eggs toasty while parent birds are out of the nest.

During the 2006 and 2007 mating seasons, Gwinner and her colleagues attached 53 bird boxes to trees near Ammersee, watched males build nests, and waited for the first clutches of eggs to be laid. Once the eggs in the nests were ready for incubation, the researchers swapped out the original nests with 36 artificial ones. Half of these contained herbs, such as hogweed, cow parsley, and goutweed, and half were made of just dry grass to act as controls. Gwinner’s team also added a “dummy” egg—a disguised temperature sensor—to each nest to record the eggs’ temperatures for roughly 13 days, the length of the incubation period. From the egg temperatures, the team could infer when the starling parents left the nest, when they came back, and how long they sat on their eggs.

The dummy eggs in the herby nests did log higher average temperatures than those in the plain nests over the course of the study. But temperatures fell at the same rate in the parents’ absence, suggesting that the change was not due to physical insulation by the nest. Instead, the egg temperature data indicated that parents in herbed nests spent more time sitting on their eggs—at least 15 minutes longer per day compared with birds in nests lacking the aromatics. They also left the nest less often, at least early in the incubation period, and made shorter excursions outside (Proc R Soc B, 285:20180376, 2018).

The results show that parental behavior, not insulation, is behind the higher temperature in nests that incorporate herby materials. “I think that the volatiles of the nest herbs acted as a tranquilizer,” Gwinner says. “Parents sat more quietly on the eggs, nest temperatures dropped less often below critical thresholds, so the eggs and the embryos [within them] experienced a more-constant and higher temperature.”

I think that the volatiles of the nest herbs acted as a tranquilizer.

Hints from these experiments and others also suggest that nest herbs affect the internal development of the eggs before laying, particularly the concentration of androgens in each yolk. In a previous study, Gwinner and her colleagues collected and calculated the quantity of herbs male birds had added to the nests and then measured yolk testosterone. “We found a positive correlation of yolk testosterone and the amount of green nest material,” Gwinner says, explaining that the presence of herbs in the nest may somehow induce females to increase yolk testosterone concentration in their eggs during development. Higher concentrations of testosterone, as well as increased temperatures, could have influenced nestling growth in the experiment.

Rubalcaba, who was not involved in the study, notes that adding aromatic green plants is clearly good for the offspring. Gwinner’s finding of improved egg incubation might not be the only factor to boost the health of the baby birds in herbed nests, he says.

It’s possible that herbs might also protect the immune systems of the parent birds, notes Michel Raymond, an evolutionary biologist at the Institute of Evolutionary Sciences in Montpellier, France, who has previously studied birds’ herb use but was not involved in this study. Although Gwinner’s team had earlier found no evidence that the herbs affected parasitic load, the authors note in the current paper that the greater heating of eggs in herbed nests could prevent bacteria from growing on the parents, keeping them healthier. If so, “the energy saved (the immune system is costly) could be invested parentally,” Raymond writes in an email to The Scientist. If the parents are healthier, they can invest more energy in caring for the chicks, making them fitter in the long run.