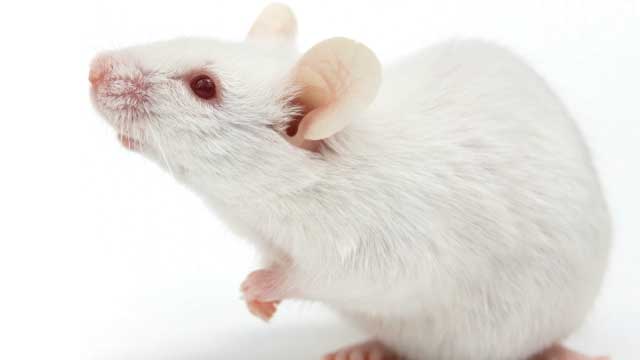 A few years ago, Pei Sabrina Xu, then a graduate student in Timothy Holy’s lab at Washington University School of Medicine in St. Louis, was trying to design an enclosure for mice that allowed males to smell (but not interact with) females, and vice versa. The animals were usually kept in separate cages, but Xu wanted them to be exposed directly to chemicals released by the other sex.

She brought up the project at a lab meeting, and one of her colleagues suggested that she create a stacked enclosure. She could house the females in the top half and the males in the lower, or vice versa, allowing the urine from the upper deck to drip down into the lower layer. Xu headed to the university’s machine shop, where she built the two-layer...

Xu’s goal in designing the stacked cage was to understand how individuals’ neuronal populations differed from one another and how they changed over time. “We know everyone thinks differently, behaves differently. That’s largely because of differences in the nervous system. But the brain is so complicated,” says Xu, now a postdoc at the University of California, San Francisco. “We even don’t know whether different individuals have different types of neurons.”

In the mouse vomeronasal organ (VNO), more than 300 different types of sensory neurons respond to a vast array of odor molecules. “The number of different genes for olfactory receptors is huge,” says Holy. “About 300 different genes—about 2 percent of the whole mouse genome—are devoted to making these receptors. Each cell picks one of these receptors to express at high levels. The gene that gets picked is sort of the identity of the cell.”

About 300 different genes—about 2 percent of the whole mouse genome—are devoted to making these receptors. Each cell picks one of these receptors to express at high levels.—Timothy Holy,
Washington University School of Medicine

Taking advantage of a light-sheet microscope developed by Holy, Xu examined how the stacked living arrangement affected neurons in mice’s VNOs. She extracted the organs from the mice and used the microscope to simultaneously monitor the activity of approximately 10,000 neurons in response to various chemicals, revealing their neuronal types. She documented dramatic individual variation in the cellular makeup of each mouse’s VNO, and discovered distinct neuron types that existed only in males. And Xu found that, after 9 to 13 weeks of living in the stacked cages, the VNOs of males living beneath females completely lost those male-specific neurons that responded to the scent of female urine. In male mice that lived beneath females and were then housed alone for another two months, those male-specific neurons came back (Neuron, 91:878-92, 2016).

“To me, that was a surprising result, in the sense that this is a part of the nervous system involved in pheromones,” says Holy. For such a biologically important system, Holy expected differences in VNO cell composition and function to be innate, but “contrary to my own prediction, [the results were] consistent with [the differences] being entirely based on the experience of the animal.”

Brandeis University’s Leslie Griffith, who studies neuronal plasticity but was not involved in the study, agrees. “It gives you another level of plasticity in sensory systems that I think people have not at all appreciated,” she says. “People think about primary sensory systems really at the beginning as being labeled lines: you have a neuron that senses a particular chemical or temperature or whatever . . . and the plasticity has always been thought of as being downstream of those primary sensory neurons. Here you have a really nice example of where it’s not necessarily a labeled line system; the system itself is plastic.”

Xu confirmed that the scent of female urine was driving the neuronal change by providing male mice in nonstacked cages with bedding material soaked in female urine. Same result, she says: “male-specific neurons disappear.” And the same held true when she soaked the bedding material in epitestosterone sulfate, a chemical that activates the same male-specific neurons as female urine. “[Xu] ended up basically eliminating particular subsets of cell types from the nose simply from giving the animal extended experience with those odors,” Holy says. Xu even compared the two VNOs of individual animals, one from each nostril, after one nostril had been blocked, and saw changes in the VNO from the unblocked nostril only.

“The interesting thing for me from the plasticity standpoint is they’re looking at males being interested in females. This is often thought to be very innate,” says Max Fletcher, who studies how learning affects neural encoding of sensory information at the University of Tennessee Health Science Center.

As for how the changes are taking place, Holy and Xu suspect that male-specific, urine-detecting neurons simply are not replaced after they die. Because the olfactory system is exposed to the external environment, the cells are constantly turning over. The average lifetime of a VNO neuron is only a couple of months—almost exactly the length of time it took for Xu to see the changes to the neuronal population. “It really does jibe with the time course,” says Griffith.

Holy says his lab is currently investigating this mechanism further, and he’s got the tools to do it. His microscopy setup enabled Xu to image some 500,000 neurons. “That’s a ton,” says Fletcher. “That’s way more than most people get close to.”

Griffith agrees: “From a purely technical point of view, [this study] really is a beautiful example of how you can record from many different neurons and actually get something coherent out of it. . . . This is likely the tip of the iceberg.”