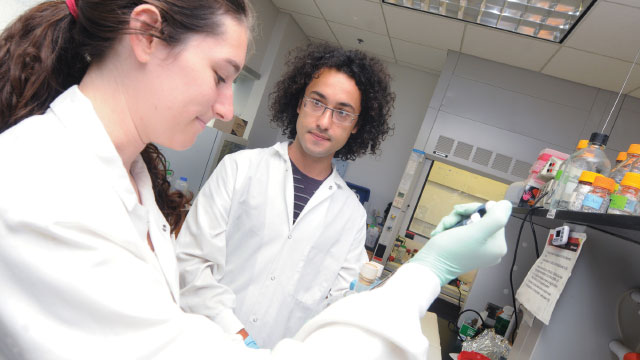 LYME LAB: Temple Douglas, then a high school student, works with former George Mason University grad student Davide Tamburro during the Aspiring Scientist Summer Internship Program.EVAN CANTWELL/GEORGE MASON UNIVERSITYToward the end of her 2009 summer internship at a George Mason University proteomics lab, high school student Temple Douglas wondered if she could use her research to turn a family problem into a clinical breakthrough. Lyme disease, a scourge in her native Virginia, had previously struck both her mother and brother, so the family was aware of the drawbacks of the single available diagnostic test. The current blood test probes for antibodies developed against the disease-causing bacterium Borrelia burgdorferi, which only appear several weeks after the onset of symptoms such as the telltale reddish oval or “bull’s-eye” rash that appears in three-fourths of cases. What if the hydrogel nanoparticles Douglas had been using to concentrate cancer biomarkers...

“Those bacteria have to be shedding proteins, and those proteins are probably secreted in the urine,” Douglas remembers thinking. So she continued to work in Alessandra Luchini’s lab throughout the fall and the following summer, fine-tuning the particles and testing their affinity for Lyme-causing bacterial proteins in urine. Her hard work paid off with a published paper (Biomaterials, 32:1157-66, 2011), and clinical trials of the test, launched in 2012.

Douglas joined Luchini’s lab, her first real research experience, through George Mason’s Aspiring Scientists Summer Internship Program (ASSIP). “Our goal. . . was to give [high school and college students] hands-on experiments in the lab so that they could experience the agony and the ecstasy of science,” says program cofounder and George Mason researcher Lance Liotta. Prior to Douglas’s arrival, Luchini’s group had developed particles with a hydrogel exterior that sheltered a core of chemical dyes. The dyes bind with high affinity to small proteins, concentrating the proteins from a more dilute solution of blood or urine by as much as 2,000-fold. At the same time, the hydrogel lattice prevents the proteins’ degradation and excludes larger molecules. Douglas optimized the particles for Lyme by testing the affinity of different dyes for B. burgdorferi proteins spiked into synthetic and then real human urine.

It’s so rewarding to see that my research materialized into something useful.—Temple Douglas,
Virginia Tech

The proof of concept of her system came from a source close to home: Douglas’s grandparents sent her a urine sample from their Lyme-infected dog Jack, and after treating the urine with her concentrating nanoparticles, she was “super excited” to detect the bacterial proteins she was looking for. That eureka moment is exactly what Liotta hopes students will get out of ASSIP: if making an original discovery “doesn’t hook them on a career in science, I don’t know what will,” he says. It certainly worked for Douglas, who went on to graduate from Princeton University, writing her senior thesis on the theoretical physics of cancer.

Meanwhile, Luchini’s group partnered with George Mason spinout company Ceres Nanosciences to further develop the Lyme diagnostic for the clinic. Ceres had begun commercializing the hydrogel nanoparticles, which it named Nanotrap, in 2009, and had already collaborated with the Luchini team on an anti-doping urine test for human growth hormone. “We recognized that [Nanotrap] had a really powerful set of capabilities and appeal across a lot of different diagnostic needs,” especially for noninvasive tests based on urine or saliva, says Ceres CEO Ross Dunlap.

The Lyme test involves adding Nanotrap particles to urine, where they concentrate B. burgdorferi outer surface protein A (OspA), and then eluting OspA from the particles and assessing its presence with standard immunoassays (J Transl Med, 13:346, 2015). The protein, which infected animals shed in their urine, is both important for early infection and highly conserved across Borrelia species, according to Luchini, and can be detected in human patients’ urine after concentration with Ceres’s nanoparticles.

Yet Gary Wormser, a Lyme disease researcher at New York Medical College, is skeptical about OspA, which he says is expressed in the tick but often not in the human host. Still, he is interested in collaborating with Luchini’s team, especially if the sample volume required for the test is reduced—he is reluctant to part with urine samples from his own Lyme research collection to provide the 40 mL of urine currently needed per patient for the Nanotrap diagnostic. He agrees, however, that standard serological tests are deficient. Anti-Borrelia antibodies appear weeks after the onset of symptoms, but once made, the antibodies can linger in the body for decades, complicating the diagnosis of a new infection. “What we need is a test for active Lyme disease,” he says.

Many doctors and researchers seem to agree, given that the clinical trial of Ceres’s  reference test, which is open to any U.S. physician, has already attracted interest from “almost every state,” Dunlap says. The company is also developing a point-of-care test that it hopes the FDA will approve in two to three years. Meanwhile, Ceres and Luchini are both pursuing other diagnostic opportunities using the concentrating nanoparticles, for diseases such as malaria, congenital and HIV-coinfected Chagas disease, and traumatic brain injury.

Luchini credits Douglas, “an extremely brilliant young lady,” with providing the lab with a refreshing new perspective. “[The Lyme diagnostic] is a beautiful example of. . . bringing an idea dear to the student all the way to patient benefit,” she says. For her part, Douglas is pleased to have made a difference, even though she doesn’t have a financial stake in the products resulting from her work: “It’s so rewarding to see that my research materialized into something useful,” she says.

Now a biomedical engineering graduate student at Virginia Tech, Douglas has returned to cancer research—exploring methods to separate metastatic cells from less-invasive populations based on their varying levels of cell polarizability. “It’s nice to apply what I know to a [biological] system that, from a physical point of view, is not very well characterized, and try to see what I can do,” she says.