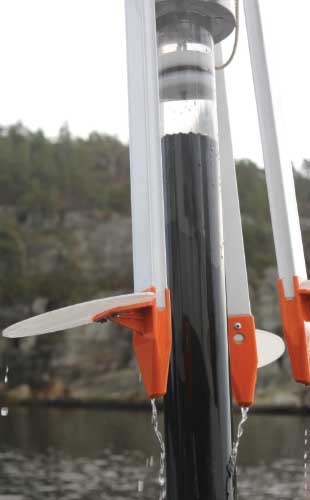 HARD-CORE BIOLOGY: One of the sediment cores from which Nina Lundholm pulls slumbering phytoplankton to reanimate and studyMARIANNE ELLEGAARD, UNIVERSITY OF COPENHAGEN

After a decade studying microscopic marine life, biologist Nina Lundholm decided in 2011 that it was time to bring back the dead. She had first become fascinated with phytoplankton when she was a PhD student at the University of Copenhagen, and much of her research since then has focused on how their populations respond to short-term ecological changes.

Studying variation between modern species led her to wonder how these tiny organisms changed over longer stretches of time. “Because [marine phytoplankton] make up the basis of the food web, it is important to see how they respond to changes in the environment and the climate,” says Lundholm, who is now an associate professor at the Natural History Museum of Denmark.

Marine phytoplankton, which include a diverse array...

Some phytoplankton produce algal blooms that can be used to study the impact of short-term environmental changes, and paleoecologists collect dead phytoplankton from ocean sediments to study longer-term climatic changes, recorded in the chemical structure of their microscopic skeletons.

But not everything in the sediments is dead. Some phytoplankton species form cysts that have been shown to lie dormant for up to a century. “It’s a good strategy to make a cyst, go to the sediment at the bottom, and hang out until conditions improve,” says Rynearson. “Significant time periods [can pass] where conditions aren’t suitable for growth.”

As well as helping phytoplankton species survive hard times, their cysts serve as time capsules for scientists to crack open. The idea of resurrecting these dormant cells to study past organisms directly, known as resurrection ecology, isn’t new—similar techniques have been used to revive dormant moss and crustaceans. But applying the method to marine ecosystems has proved more challenging.

In 2011, Anna Godhe at the University of Gothenburg and colleagues succeeded in resurrecting dormant cysts of marine phytoplankton called diatoms (PNAS, 108:4252-57). They found that the genetic structure of the diatom Skeletonema marinoi had remained relatively unchanged for more than 100 years, but that populations inhabiting a fjord were genetically different from open-water diatoms.

But reanimating dinoflagellate cysts after nearly 100 years is no mean feat. In order to estimate the age of each section of a sediment core, and to collect cysts for resurrection, the team had to slice the cores into sections. But doing so exposes them to oxygen, triggering a rapid degeneration process. “We discovered that we had to keep them complete until we wanted to isolate the resting stages,” Lundholm says.Since then, Lundholm, Godhe, and their colleagues have been applying the same technique to another type of phytoplankton: dinoflagellates. Whereas diatoms are at the base of ocean food webs, dinoflagellates sit in the middle, feeding on algae and other organisms as well as producing food via photosynthesis themselves.

Her new line of research hasn’t made her very popular with her colleagues in the lab, Lundholm admits: “The cores smell like rotten eggs all over the department.”

Lundholm selected Pentapharsodinium dalei for her latest study because “it had a reasonably high germination percentage, and it germinated the furthest back in time.” Even for P. dalei the resurrection success rate remained relatively low—between 5 percent and 65 percent depending on the age of the sediment. “Dinoflagellates are challenging to work with,” Anke Kremp, a researcher at the Finnish Environment Institute in Helsinki who was not involved in the study, writes in an email. “They are difficult to cultivate and have large and peculiar genomes.” Lundholm’s team also developed new genetic markers that would allow them to study the population structure of the resurrected plankton (J Appl Phycol, 26:417-20, 2014).

Despite these challenges, Lundholm and her team were able to revive 193 clonal strains of the dinoflagellate from sediment cores collected in Koljö Fjord in Sweden (Ecol and Evo, 7:3132-42, 2017). The cysts they reanimated had been deposited between about 1922 and 2006.

The researchers used DNA microsatellite analysis to identify two subpopulations, which alternated in frequency during the 84-year record. One was common in older sediments but became relatively rare between 1960 and 1985, and is currently experiencing a population revival.

These fluctuations correlate with cyclical changes in the ocean environment in Koljö Fjord, explains Lundholm. Both the oldest and the most recent sediments were formed during summer phases of the North Atlantic Oscillation (NAO), which generates warmer, less-salty waters in the fjord. The second subpopulation became common only in the cool, saline waters of the winter NAO, between 1960 and 1980.

These fluctuating subpopulations maintain high genetic diversity in the fjord, which may help the dinoflagellates cope with dynamic environmental conditions. “We see that they respond to the environment, but overall still are quite resilient,” says Lundholm.

The study “adds much-needed, very long-term data so we can start to think about climate-level responses in phytoplankton,” Rynearson notes.

“This approach is so interesting because populations and individuals can be compared that have experienced past conditions. There aren’t many systems present in nature that allow such direct tracing of evolution,” Kremp says, adding that “resurrection ecology of plankton is still in an early stage, and the author team is a pioneer here.”

While she praises the Lundholm team’s research, resurrection ecology scientist Luisa Orsini of the University of Birmingham in the U.K. says that laboratory experiments may be required to confirm that there is a causal relationship between environmental changes due to the NAO and changes in dinoflagellate subpopulations. “Other environmental variables may drive changes in dinoflagellate subpopulations,” she says.

Replicating the dinoflagellate study in other species and in different regions of the globe will add to researchers’ understanding of how climate influences biodiversity. But there is only so much scientists can learn from single-species approaches. “The next step would be to go higher in complexity and study how communities evolve through time,” says Orsini.