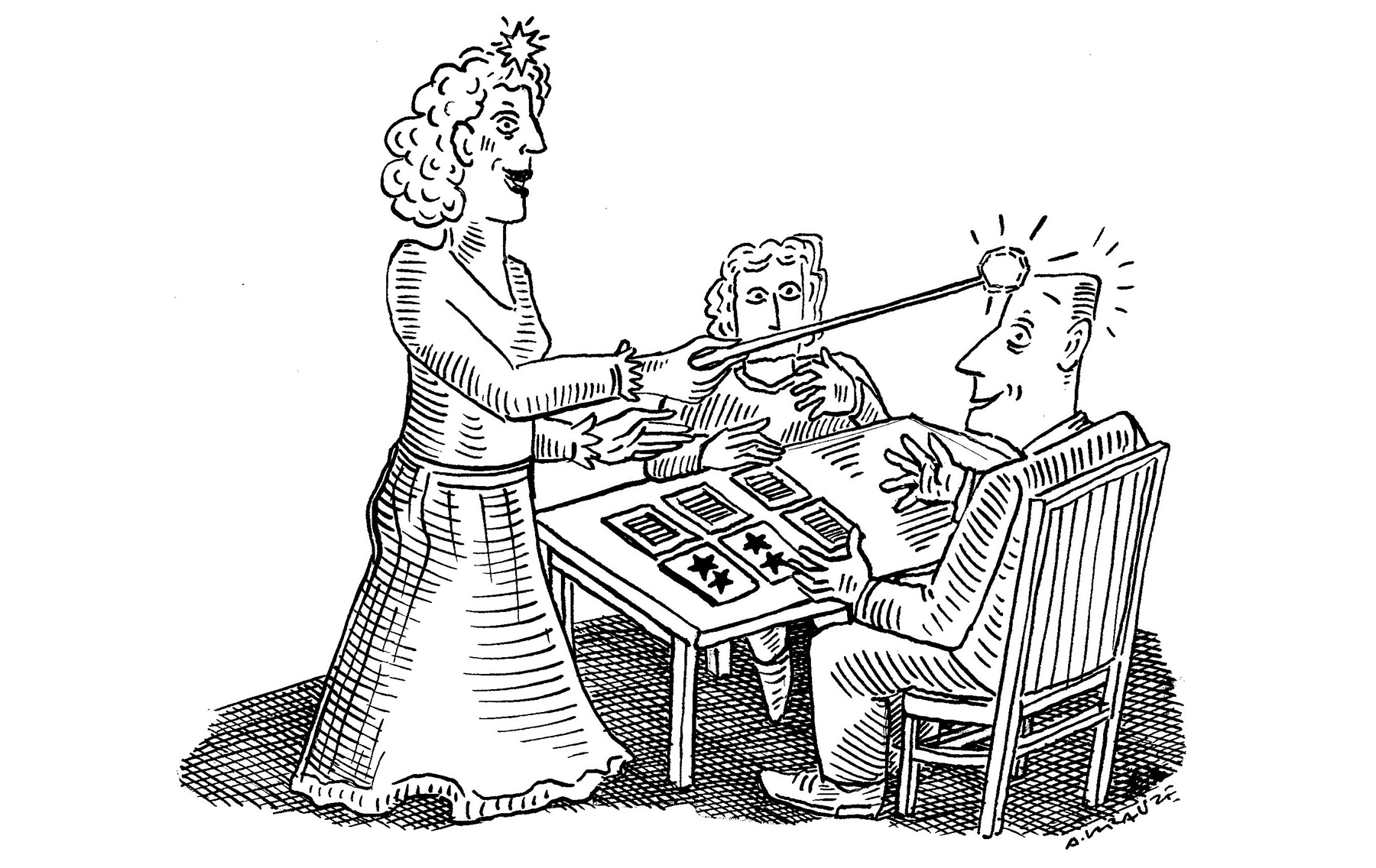 After publishing a 2014 study showing that noninvasive magnetic stimulation of the brain boosted people’s ability to remember an association between two items, Northwestern University neuroscientist Joel Voss began fielding a lot of questions from patients and their families. “We’re of course guarded in the publication talking about what we found—small but reliable increases in memory ability,” he says (Science, 345:1054–57). But some of the news coverage of that paper alluded to the procedure’s potential to treat Alzheimer’s disease and other memory-related disorders.

“I got calls—at least two a day for quite a long period of time—and emails: ‘My loved one is suffering from X, Y, or Z; thank God now you can cure it. How do we get to your lab?’” Voss says. He would have to explain to them that this was a scientific study, not an approved treatment. “There are a...

But Voss’s team continues to connect those dots, in hopes that one day the technique—the use of magnetic fields to influence activity in neurons close to the brain’s surface—could help patients with any number of brain disorders, and perhaps cognitively healthy people as well.

In August, the researchers reported that transcranial magnetic stimulation (TMS) could moderately improve episodic memory—the ability to remember people, events, and other things you’ve encountered in your life (as opposed to, say, how to do something)—when targeted at the correct part of the brain. Voss and his colleagues were interested in activating the hippocampus, a structure near the brain’s center that serves as a hub of memory production and storage. Because the hippocampus itself is inaccessible by TMS—the magnetic field falls off precipitously with depth, explains Voss—the researchers instead targeted areas of the brain where activity correlated with activity in the hippocampus, to try to activate the networks that link more-superficial regions with the deep-brain structure.

The researchers used the technique to target the posterior-medial network in 16 study participants following a memory pretest. Every day for five days in a row, subjects would come to the lab to sit for 20 minutes and allow a researcher to hold a figure-eight-shaped wand to their heads. When participants received the test treatment rather than a sham procedure, the wand emitted a magnetic field that “goes on and off very quickly,” Voss says. This field “easily goes into the brain . . . [and] induces electrical activity in the axons of the cortical neurons.”

On the sixth day, subjects returned to the lab to have their memory retested. While lying in an fMRI scanner, each person viewed images of, for example, an object or an animal—some of which were displayed within a six-panel grid, and others that were paired with a second image, of an environment. After a short break, participants looked at a series of test images and, for each one, had to report if they recognized it from the first set, and if so, where it had been displayed on the screen or which environmental scene it was paired with.

We simply can change the function of this memory network . . . from outside of the head.

This remembering of location or pairing information exercises an aspect of memory known as recollection. And it is this aspect that was improved by the magnetic stimulation—a result that fits with previous research showing that the targeted cortical-hippocampal network is more involved in recollection than in recognition, or simply knowing whether the object has been previously viewed. What’s more, Voss and his colleagues reported that better recollection correlated with activity increases in that network during memory formation, validating the experimental approach (Sci Adv, 4:eaar2768, 2018).

“I now have a pretty high level of confidence that we’re actually doing something specific to this targeted hippocampal network . . . and what we’re doing to it is at some level changing the memory-formation information process,” Voss says. “That to me is the most amazing part—just that we simply can change the functionof this memory network . . . from outside of the head.”

Voss’s group isn’t the only one trying to boost memory in this noninvasive way. At the University of California, Berkeley, neuroscientist Mark D’Esposito and his colleagues are using TMS with a different, much shorter protocol—lasting only about 40 seconds. They recently discovered that targeting hippocampal networks using this approach could improve the encoding of new memories (J Cogn Neurosci, 30:1452–72, 2018). “It’s always good when that happens—slightly different methods but coming to the same conclusions,” says Arielle Tambini, a postdoc in D’Esposito’s lab and lead author on the study.

More common than magnetic stimulation, though, is the use of electrical pulses in a technique known as transcranial alternating current stimulation (tACS), which a growing body of literature suggests can also boost aspects of memory. “The number of studies that show a positive effect is becoming substantial,” says Nick Ketz, a memory researcher at HRL Laboratories in Malibu, California, who recently coauthored a study on the use of tACS to improve memory consolidation during sleep (J Neurosci, 38:7314–26, 2018). “It’s enough that people are taking notice of it.”

But some researchers question the effectiveness of tACS. “It’s still not widely accepted, because the mechanism for influence is still a little bit unknown or unreliable,” says Ketz. “We haven’t determined why it works in some cases and not in others.” Moreover, he adds, noninvasive techniques are “still pretty coarse.”

During tACS, the scalp and the skull diffuse the voltage, so “it’s hard to know where the current is going to flow,” Ketz says. Magnetic stimulation isn’t influenced by the scalp, and as a result, researchers using methods such as TMS can aim at a specific swatch of cortex more precisely. “We can be much more specific in terms of targeting this brain region versus another brain region that’s just a couple of centimeters away,” says Tambini.

But all noninvasive approaches face additional shortcomings, says Jon Willie, a neuroscientist and neurosurgeon at Emory University School of Medicine. “Effects may be weak,” he notes in an email to The Scientist, and “it can be hard to distinguish the effects of arousal, attention, etc., from a specific effect on memory.”

When it comes to noninvasively stimulating the brain to boost memory, “really there are more questions than answers yet,” agrees Voss, so it’s too soon to make claims about the use of these techniques for treating Alzheimer’s disease or other brain disorders. For example, he says, “we don’t know what the stimulation is doing. . . . What’s actually going on neurally is quite a mystery still.”