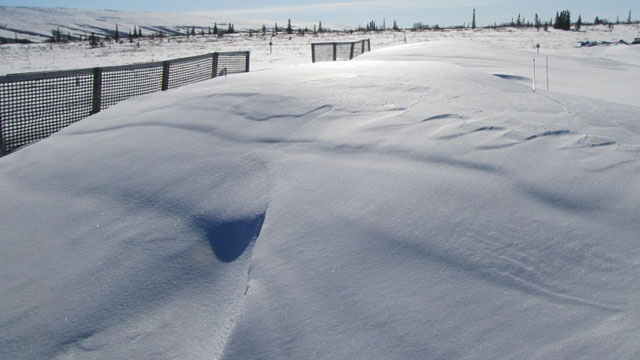 BLANKET OF WHITE: (Top) Snowpack on top of some plots in the winter insulated the ground and simulated a warming climate.PHOTO BY JJ NEVILLE; ANDRES BARON

For five straight years, from 2008 to 2012, ecosystem ecologist Sue Natali traveled to Alaska every spring for what she calls her mental vacation. For two weeks in April or May, Natali, then a postdoctoral researcher in the lab of Ted Schuur at the University of Florida, worked alongside other postdocs, students, and even a few locals from the nearby town of Healy to remove mounds of snow from their experimental plots in rolling fields in the shadow of Denali National Park.

“It’s long days,” Natali says, a hint of exhaustion in her voice as she recalls the laborious experience. “We shovel the old-fashioned way with shovels and sleds [because] we don’t want to disturb the plants. . .Everybody’s sore [from the...

Once the snow was cleared, the real work would start. For five months, Natali and her colleagues would collect data on ground thaw, water-table depth, plant growth, soil composition, carbon dioxide (CO2) fluxes into and out of the ecosystem, and more. Plots of land had been subjected to one of three experimental treatments—summer warming, winter warming, or both summer and winter warming—or had served as a control. To simulate winter warming, in the preceding fall Natali and her colleagues constructed snow fences to entrap winter snowdrifts across an 8-by-10-meter area. As snow accumulated, it acted as insulation from the cold winter air. Miniature, 50-cubic-centimeter greenhouses constructed in May simulated summer warming within some of the plots.

Removal of snow in the late spring months was an important part of the experimental design because the researchers didn’t want to artificially delay spring warming with all the extra snow, nor did they want to add extra moisture to the snow-filled plots. Thus, the vernal shoveling ritual. 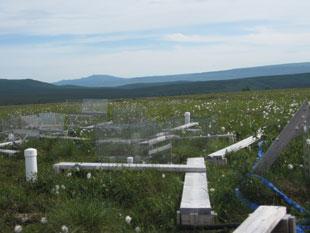 CATCHING RAYS: Small greenhouses erected above the same plot in the summer elevated local temperatures, simulating summer warming.PHOTO BY JJ NEVILLE; ANDRES BARONNatali and her crew were interested in how the carbon cycle would be affected by climate change, and in particular, by the thawing of the once permanently frozen tundra, called permafrost. The Arctic permafrost, which occupies approximately 23 million square kilometers in the Northern Hemisphere, contains an enormous amount of carbon—more than twice as much as the atmosphere—as a result of buried and long-frozen plant matter. By the end of the 21st century, 30 to 70 percent of the permafrost near the surface is predicted to thaw, giving soil microbes access to that organic material, which they respire as CO2 into the air. Of course, a warming Arctic environment also means a longer growing season and more-productive plants, which capture CO2 from the atmosphere for photosynthesis.

“The question was how those two responses would change relative to the other,” Natali says. Would more or less carbon accumulate in the atmosphere as a result of Arctic warming?

They found that increases in microbial carbon release as a result of permafrost thaw in the winter warming plots was far greater than the increase in carbon uptake by plants in the summer warming plots (Ecology, doi:10.1890/13-0602.1, 2013). “It’s good confirmation that there would be carbon loss [from the soil] due to respiration processes during the fall, winter, and spring, which hasn’t been measured well before,” says David Lawrence, an Earth system modeler at the National Center for Atmospheric Research who was not involved in the research. “I think it’s going to be useful to help us evaluate our models.”

Interestingly, plots that were subjected to both summer and winter warming had nearly the same overall carbon balances as the winter-warming-only plots; greenhouse-encased plants didn’t seem to shift the carbon balance significantly when the plot was also subject to a warming tundra. “That was a surprise,” Natali says. “I’m not sure of the reason why. My guess is it has something to do with nutrient dynamics or changes in soil moisture.”

Soil moisture can, in fact, have a significant impact on the carbon cycle. When permafrost thaws, the soil can either get drier, as a result of better drainage, or wetter, if the ground takes on water from surrounding higher regions. In 2010, Natali initiated a drying experiment at the Alaskan field site to isolate the effects of permafrost thaw and moisture changes. By installing a barrier down to the permafrost and pumping out the water table, the researchers have found greater fluctuations in CO2 levels. Some of the plots were also producing methane, a greenhouse gas with higher global warming potential than CO2. “I never thought of [this dry region] as a source of methane,” says Natali, now an assistant scientist at Woods Hole Research Center, noting that any methane released into the atmosphere is quickly consumed by microbes. “But in our plots that are warm and wet, we actually started to see net methane being produced.”

Regardless of the reason, the finding that warming favors carbon release from the soil over absorption by plants supports the concern that the Arctic will, one day, shift from a carbon sink to a carbon source. Indeed, even Natali’s control plots ended up losing carbon to the atmosphere. Over the course of the three-year experiment, areas of tundra not subjected to experimental treatments lost an average of 40 grams of CO2 per square meter each year. “That was a surprise because the Arctic has been a carbon sink for tens of thousands of years,” says Natali. “But we found that this is consistent with observed CO2 dynamics in nearby areas that are currently undergoing ‘natural’ permafrost thaw.”

Whether this is the rule or the exception remains to be seen, says Lawrence. “The climate and soil situations [in the Arctic] are so diverse . . . my expectation is that if you repeated this experiment in a slightly different location you might get significantly different results.”

Earth systems scientist Charlie Koven of Lawrence Berkeley National Lab would also like to see this kind of experiment replicated in different locations. Natali’s site in central Alaska is a relatively warm permafrost area, Koven explains. “It would be interesting to see this experiment done in the much colder environments that we find in Siberia, which is where the vast majority of the permafrost is.”

Natali is now doing work in Siberia to study the effects of fire on permafrost thaw and ecosystem carbon storage, as well as to understand the response of Siberian watersheds to climate change. After shoveling snow in Alaska for five springs, Natali explains that she now lives “on a barge on a Siberian river for a month with eight undergraduates and two other faculty.”

Correction (March 3, 2014): This story has been updated from its original version to correctly state David Lawrence's affiliation with the National Center for Atmospheric Research, not University of North Carolina at Chapel Hill. The Scientist regrets the error.