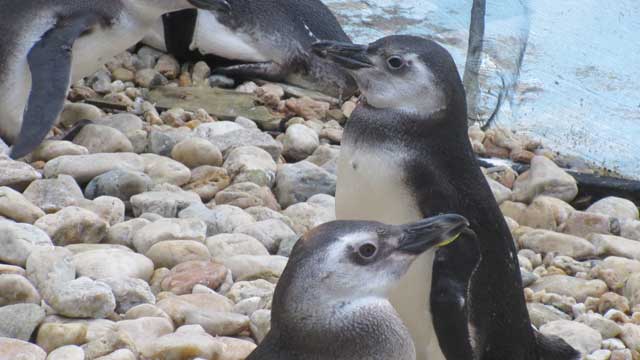 It’s an early August morning on a nearly deserted beach in southern Brazil, and 23 Magellanic penguins (Spheniscus magel­lanicus) are tottering toward the water. These penguins are survivors. About two months ago, birds that should have been swimming and feeding offshore started washing up on the beaches of the Brazilian state of Santa Catarina, primarily near the city of Florianopolis. More than 120 have come ashore this year, but most were too weak to survive. The birds now heading toward the Atlantic waves lapping Moçambique Beach were rehabilitated by a group of veterinarians and volunteers who stand gathered on the shore, watching their avian charges disappear into the water.

View a slideshow of wayward penguins getting a helping hand in Brazil.

Each year around April, as the Southern Hemisphere winter approaches, the Magellanic penguins, also known as Patagonian penguins, leave their breeding grounds in southern...

Birds like these appear every year, while others continue their travels even farther north. Researchers are still trying to understand exactly why some birds end up farther from home than ever before.

Cristiane Kolesnikovas is a veterinarian with Associação R3 Animal, an NGO that does wildlife rehabilitation for the Santa Catarina State government. Sitting in her office at Parque Estadual do Rio Vermelho, the state park where the penguins are rehabilitated, Kolesnikovas says each year the penguins swim north until they find sufficient food. Most of the birds that show up here are not injured—just weak.

“Most of them are juveniles that we think cannot eat as well as the adults, so they beach,” she says. “And some are caught by nets.” But for the most part, the circumstances that lead to the penguins’ arrival on Brazilian beaches are still mysterious.

Recent years have been tough for Magellanic penguins along the Atlantic coast of South America. In 2008, more than 3,000 birds were found stranded along the coast of Brazil—almost all of them juveniles. Nearly 15 percent of the birds were smothered in oil, and about a third were dead.

Pablo García Borboroglu, a researcher at Argentina’s National Research Council and president of the Global Penguin Society, and collaborators studied what happened with the penguins in 2008 and reported their findings in a 2010 Marine Pollution Bulletin article: the penguins had strayed far north of their normal winter migration path (60:1652-57). A few nearly reached the Equator. Most of the birds that went as far as northern Brazil were juveniles. Many were dehydrated, anemic, hypothermic, and emaciated, García Borboroglu says. He notes one factor that may have contributed to the anomalous migration is that year’s unusually cold sea-surface temperatures around the time that the anchovy were spawning, which may have depleted the penguins’ key prey base. 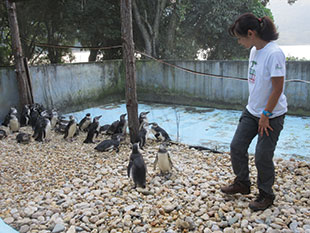 PENGUIN KINDERGARTEN: Veterinarian Cristiane Kolesnikovas checks on juvenile Magellanic penguins at the Parque Estadual do Rio Vermelho the day before some of them would be released into the wild.ELIZABETH FIEDLERGarcía Borboroglu is tracking the birds to better understand the challenges they face. He’s used satellite trackers attached to their backs and bands on their feet, but he says he is still searching for a system that can withstand months in salt water and has a suitably long battery life.

García Borboroglu says he believes climate change is causing the birds to modify their migration route, but it is difficult to know for certain. He adds that most climate–change models predict increased anomalies, such as swings in temperature, throughout Earth’s oceans.

P. Dee Boersma, a collaborator of García Borboroglu who heads the University of Washington’s Center for Penguins as Ocean Sentinels, says that temperate-zone penguins, even while pairs are incubating eggs and taking turns feeding at sea, are swimming 60 km farther north from their nests than they did a decade ago. This change likely reflects “shifts in prey in response to climate change and reductions in prey abundance caused by commercial fishing,” she says. “These temperate penguin species, marine sentinels for southern oceans, demonstrate that new challenges are confronting their populations.”

Knowing what is going on with penguins could prove useful for understanding the changing nature of marine ecosystems in a broader sense. Those changes include increases in precipitation and reductions in sea ice associated with climate warming. In a 2008 BioScience article, Boersma wrote that as “ocean samplers, penguins provide insights into patterns of regional ocean productivity and long-term climate variation” (58: 597-607). Boersma says that after more than 30 years of studying temperate penguins, her research suggests that marine systems now face “a new era of unprecedented challenges.”