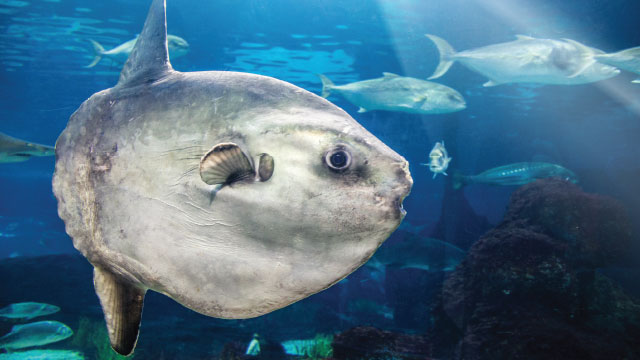 HOLY MOLA: The ocean sunfish can grow to more than two meters in length, with a mass of up to 1,000 kilograms.© ISTOCK.COM/LEOPATRIZI

Off the coast of the French town Banyuls-sur-Mer, dozens of dorsal fins bob up and down in the water. A quick glance may suggest something menacing, but a longer look gives way to an even greater surprise: big, bizarre fish called Mola mola, from the Latin word for millstone. Commonly known as ocean sunfish, these behemoths tip the scales at up to 1,000 kilograms, making them one of the largest bony fishes alive today.

More intriguingly for the researchers who study them, some populations of ocean sunfish seem to be on the rise. “It’s quite striking in the western Mediterranean. I was there diving last spring and there were so many sunfish,” says David Grémillet, an expert on seabirds at the Center...

Not much is known about these ocean giants. Strangely, given their massive size, sunfish appear to subsist on jellyfish—a relatively calorie-poor food. Although they’re not highly sought after for human consumption compared with cod and salmon, their large, slow-moving bodies often get them nabbed as bycatch by fishermen. As a result, the International Union for Conservation of Nature has listed sunfish as vulnerable, making researchers keen to find out how many there are swimming slowly along in the world’s oceans.

To get a better estimate of the Mediterranean population, in 2011 and 2012 researchers from the University of La Rochelle took to the air in a slow, low-flying plane. Cruising about 180 meters above the water, at a speed of roughly 190 kilometers per hour, the surveyors could look down at the sea through bubble-like windows under the wings—though even then, to get good counts “you have to have really well-trained observers and a smooth sea,” says Grémillet, who did not participate in the survey. All in all, the team spotted up to 475 ocean sunfish per 100 square kilometers—an order of magnitude higher than estimates for other seas.

All the conditions are there for the rise of slime.—David Grémillet, Center for Functional
and Evolutionary Ecology

When Grémillet saw the counts, he says he started to wonder how so many sunfish could be sustaining themselves in the relatively small confines of the Mediterranean, compared with the open ocean. So he turned to Craig White, an evolutionary physiologist at Monash University in Melbourne, Australia, for help running the numbers. “A hundred grams of milk chocolate contains a little over 500 calories, whereas a hundred grams of jellyfish contains less than one percent of that, around five calories,” White tells The Scientist in an email. “In order to meet their daily energy requirements when consuming only jellyfish, sunfish must therefore consume very large amounts.”

Last year, White and Grémillet calculated just how much jellyfish an average-size Mola mola spotted in the survey—that is, a 120-kilogram fish—would need to eat. The answer: more than half its body weight, or about 71 kilograms a day. Combining that information with population estimates of ocean sunfish from the aerial surveys, the researchers predicted that in the summer months the Mediterranean Mola mola population would eat roughly 20,774 tons of jellyfish a day (Curr Biol, 27:R1263–64, 2017). “That was really substantial,” Grémillet tells The Scientist.

It was after calculating the ocean sunfish’s jellyfish consumption that Grémillet realized that the team’s approach might help resolve another ocean mystery, one linked to an idea dubbed “the rise of slime.” This hypothesis, first posited by marine ecologist Jeremy Jackson and colleagues in 2001, suggests that due to a warming climate and overfishing, increasingly large numbers of jellyfish, along with algae blooms and other slimy blobs, will colonize the oceans (Science, 293:629-37). There are reasons to think this may already be happening in the Mediterranean, notes Grémillet. “Surface waters have been warming very quickly, and also there’s a disappearance of lots of small fishes,” he says. “All the conditions are there for the rise of slime.”

This hypothesis has historically been difficult to test because jellyfish are difficult to see from the air, hindering large-scale population estimates. But sunfish, as the University of La Rochelle team had shown, are not. So in the paper that they published on the sunfish data at the end of last year, Grémillet and colleagues suggest that ocean sunfish might make good indicators of jellyfish populations, and, therefore, serve as a proxy for the rise of slime.

Natasha Phillips, a graduate student studying ocean sunfish at Queen’s University Belfast, says the researchers have a “fascinating idea.” But there’s still a lot scientists don’t know about Mola mola, such as whether or not the adult diet consists only of jellyfish. (In any case, the fish probably go right for the gonads; one of the cnidarians’ most energy-rich parts, those are “caviar for ocean sunfish,” Phillips says.) Recent research has shown that younger ocean sunfish have a more diverse diet, eating crustaceans and teleost fish as well as cnidarian species, so adults may, too (Sci Rep, 6:28762, 2016).

Tierney Thys, a marine biologist and National Geographic explorer, raises the same point. “Sunfish—both youngsters and adults—have a range of items that they eat—not just jellies. They are not obligatory jelly eaters,” she writes in an email to The Scientist. What’s more, jellyfish are “not a world of homogeneous slime, primed and poised to take over every ravaged ecosystem.” Not all scientists are convinced that jellies will overrun warmed oceans, and as a group, Thys says, they are one of the most diverse animal phyla and a natural part of the ecosystem, so they are getting a bit of a bad rap. Still, she notes, it will certainly be important to monitor what is happening in the Mediterranean, specifically, identifying what the sunfish there are eating, which jellyfish species are there, and how both animals move and migrate.

Grémillet agrees that the team is far from proving that the abundance of ocean sunfish shows the rise-of-slime hypothesis to be correct. More aerial surveys of ocean sunfish are needed, which could happen this year. “We could repeat the counts and test the rise-of-slime hypothesis using sunfish,” Grémillet says, explaining that an increase in sunfish numbers would likely indicate a corresponding increase in the fish’s gelatinous foodstuff. “That’s the whole idea.”