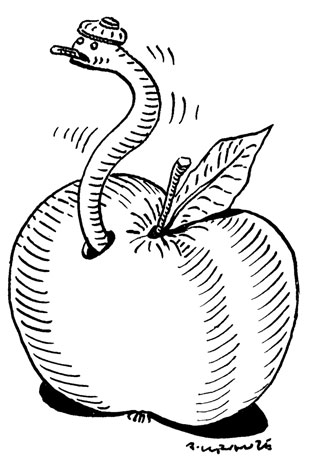 The nematode Caenorhabditis elegans is the workhorse of many developmental biology labs. The model organism is simple to grow, its genome is sequenced and well annotated, the developmental history of its 959 somatic cells in the adult hermaphrodite is mapped out, and it’s relatively easy to create genetic mutants. In 2005, three separate research groups showed that C. elegans could protect itself from viral attack using RNA interference (RNAi), but no natural virus capable of infecting the species had ever been described. This raised a question: If the nematode does not get infected by viruses, why does it have innate antiviral defenses?

Marie-Anne Félix, of the Institut Jacques Monod, found the answer in an unlikely place—an orchard in Orsay, a southwestern suburb of Paris. Félix was looking for nematodes in the wild for her research project on the evolution of natural worm populations. She brought a rotting...

Sure enough, she saw nematodes emerge from both samples: C. elegans from the apple and a closely related species, C. briggsae, from the snail. But something wasn’t right. “They looked a little pale,” she says. Félix could tell that the animals’ intestines were damaged, but she couldn’t see any pathogens under the microscope. Antibiotic treatment made no difference, but when she took worm embryos and soaked them in a diluted bleach solution for a few minutes—a standard trick for disinfecting nematode cultures—they grew into healthy adult worms.

Then Joséphine Piffaretti, a graduate student in Félix’s lab, mashed up infected worms and strained the extract through a 0.2 µm filter, which gets rid of bacteria and anything larger, such as single-celled parasites. Healthy worms exposed to the filtrate got sick, displaying the same symptoms as the originals. Fifty generations later, Félix’s re-infected nematodes were still ill, pointing to an infectious agent such as a virus, rather than a chemical toxin.

Félix sent samples of DNA and RNA from the two nematode isolates to David Wang at Washington University School of Medicine in St Louis, Missouri. His lab sequenced the samples and found sequences similar to nodavirus, a group of single-stranded RNA viruses that typically infects fish and insects. But the sequences from Félix’s two samples appeared to be a new family of nodavirus. Wang suggested to Félix that these newly discovered viruses be named after the places they were found, so the virus from the wild C. elegans was called Orsay, and the one from C. briggsae became Santeuil, for the regional natural park where she found the snail (PLoS Biology, 9:e1000586, 2011).

Morris Maduro, of the University of California, Riverside, attributes Félix’s success in finally finding viruses that naturally infect nematodes to targeting fruit rather than the soil, where everybody had assumed they might be found. “For years, people had been looking in the wrong places,” he says.

Félix then collaborated with Eric Miska at the Gurdon Institute, University of Cambridge, to examine the role of RNAi in protecting the worms from the pathogens. The virus-infected nematodes that Félix found were defective in the RNAi pathway that protects laboratory strains of C. elegans, but the new viruses lacked an RNAi-suppressing sequence found in other members of the nodavirus family. As a result, the newly discovered viruses failed to infect lab strains of C. elegans. Only when Miska’s lab knocked out rde-1, a gene in normal worms required for RNAi processing, could Orsay infect the standard C. elegans.

Félix continues to find new strains of nematodes in the wild, some of which seem naturally resistant to infection with these viruses. Similarly, Orsay won’t infect C. briggsae, and the Santeuil virus won’t infect C. elegans. Jean-Luc Imler, of the Institut de Biologie Moléculaire et Cellulaire, Université de Strasbourg, says that the obvious next goal is to find out why certain worm strains resist infection. It could be because they lack the receptor the virus uses for entry, or “more interestingly,” he says, “it could be there are other defenses than RNAi.”

Félix is interested in the coevolution of nematodes and the viruses that infect them, and in identifying the factors that make viruses specific for certain nematode strains. Previously, she hadn’t realized that virology lacked small animal systems in which to study the genetic basis of infection and resistance. Now, she says, “We can do the molecular biology and the genetics” to understand what confers host specificity.

A Hidden Jewel refers to an article, published in a specialist journal, which has been evaluated in Faculty of 1000, a post-publication peer review service of the Science Navigation Group. Read the evaluation of Félix’s article