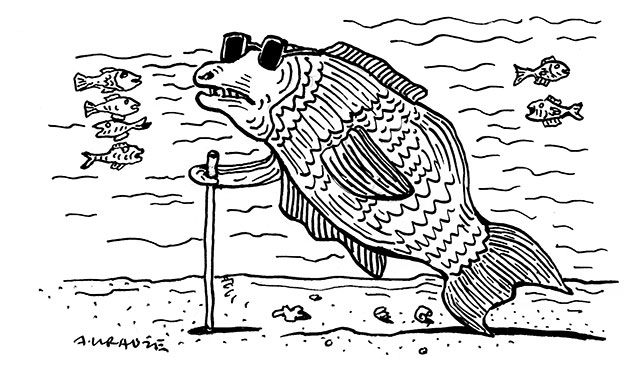 For two million years, Phreatichthys andruzzii, a species of cavefish found in Somalia, has been swimming around in utter darkness. Whatever visual abilities its ancestors possessed, useless in such a habitat, have since atrophied, making the fish a very dubious subject for studying visual tasks. But for Christian Agrillo, a researcher at the University of Padova in Italy, the blind cavefish was the perfect species to challenge whether numerical assessment abilities among fish required visual cues.

Agrillo and his colleagues had been studying the numerical skills of fish whose vision functions just fine. It turns out that fish—like many other animals—can, if not exactly count “one, two, three,” at least distinguish one from three. And Agrillo’s group is not the only one to observe this.

Robert Gerlai, a behavioral geneticist at the University of Toronto at Mississauga, and his collaborator, Luis Laplaza-Gómez of the University of Oviedo, have found similar abilities among freshwater angelfish (Pterophyllum scalare)  (Animal Cognition, 14:1-9, 2011). “Always, the test case chooses the larger shoal [because] the larger shoal gives some adaptive advantage,” he says, such as avoiding predators and finding mates.

It’s presumed that the fish are making their decision based on visual information. Because the compartments used in such experiments are separated, olfaction and lateral line detection (a pressure-based sense conferred by pores along the sides of fishes’ bodies) can be ruled out. Auditory signals are possible, but they’d have to travel through glass and air to reach the chamber where the test fish is swimming, Gerlai says.

So if the fish are calculating size from visual cues, can blind cavefish still perform this important task? To find out, Agrillo set up a circular tank with two clusters of sticks opposite one another. He trained the cavefish to swim toward the larger cluster to receive a food reward. Then he tested the animals by placing them in a tank without any food and watched where they would swim. Over and over, the fish tended to hang out by the cluster where they had been trained to find food (J Exp Biol, 217:1902-09, 2014). “Then we did two versus four sticks, and they solved the task,” says Agrillo. “Now we know from this study that the lateral line can be used to solve quantity,” he says.

There’s now evidence that a great many different animals can do some numerical tasks with varying degrees of competence.—Brian Butterworth, University College London

The blind fish offered another opportunity: to study whether the fish are relying on volume or are actually assessing the numerical value of the group. In another set of experiments, Agrillo controlled for volume and surface area. Remarkably, the fish could still tell two objects from four objects, even if they occupied the same amount of space.

Given that the fish didn’t need visual information to assess quantity, Rosenthal says, the study suggests that determining numerical value is not dependent on how the animal gets the information. “There’s something downstream of sensory processing where this is happening,” he says. Perhaps information from the different senses is processed first by their respective brain regions, such as the visual cortex or auditory cortex, and then moves up to a higher, numerical processing center where those streams of information converge. Agrillo says he wasn’t terribly surprised that sensing number is such a robust skill. “Even invertebrates with smaller brains can discriminate,” he says.

Recent studies have shown, for example, that ants, spiders, and bees can “count.” “There’s now evidence that a great many different animals can do some numerical tasks with varying degrees of competence,” says Brian Butterworth, a professor emeritus at University College London who has collaborated with Agrillo in the past. “It’s not associated with the type or size of the brain or where they are in the phylogenetic tree.” And scientists have shown that animals can use their other senses to do the job, says Butterworth; toads and lions, for instance, use their hearing to size up mates or intruders, respectively.

Not only is this grasp of quantity robust in its capacity to gather numerical information from different senses, but the memory of it appears to be retained. Gerlai and Gómez-Laplaza recently conducted a study in which they presented a fish with two shoals at either end of a tank. They then concealed the compartments and removed all but one fish of each shoal. When the fish was again allowed to view the compartments, it appeared to remember where the larger shoal was located and hung out at that end of the tank (J Comp Physiol, in press). “In fish you don’t expect that kind of complexity, yet what we did was show these fish can make a decision based on their short-term memory,” he says. “They don’t have to see the items.”

The neural circuitry responsible for numerical abilities in the fish brain is unknown. Gerlai and Butterworth say they’d like to take advantage of zebrafish’s known genome and well-characterized anatomy to learn more about how numerosity—the value of a set—is computed. Butterworth says they want to identify the genes responsible for constructing the neural mechanisms. Such information might help uncover the basis of human dyscalculia—learning disabilities in math. “Can we identify this gene or these genes in order to tell which individuals are going to have problems doing this task?” asks Butterworth. “We might be able to get to the bottom of it by looking for genes in other species.”