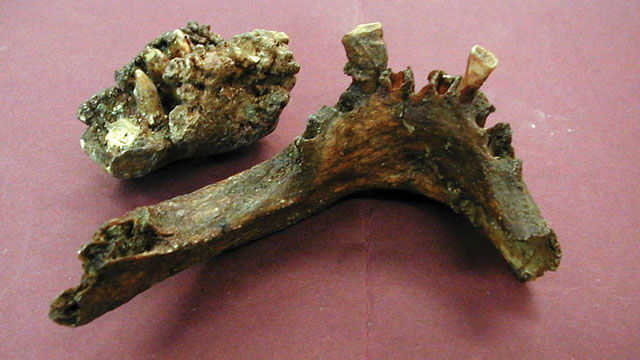 GENETIC ARCHAEOLOGY: A matchbox-size chunk of dental tartar cut from this 1,000-year-old jaw inspired the study of differences in the oral bacterial communities of early and modern humans.COURTESY OF ALAN COOPERThe idea took root with the offer of an unusual gift—a hefty chunk of ancient dental tartar. In 1996, while a postdoc at the University of Oxford, biological anthropologist Alan Cooper visited archaeologist Keith Dobney at York University. They had already discussed several ideas, including how they might use ancient tartar—otherwise known as dental calculus—when Dobney pulled from his desk drawer a matchbox-size brownish-grey block of the stuff, taken from a 1,000-year-old skeleton. “I was amazed,” recalls Cooper.

Dobney, now at the University of Aberdeen in Scotland, had been using scanning electron microscopy to examine the calculus for traces of food when he noticed an abundance of fossilized bacteria. He suggested it might also be a source...

Almost 2 decades later, armed with ultrasterile consumables and an ultraclean lab at the University of Adelaide’s Australian Centre for Ancient DNA—where he is now director—Cooper and his colleagues have used DNA extracted from dental tartar to trace how the bacterial communities that live in our mouths have changed over the past 8,000 years (Nature Genetics, 45:450-55, 2013).

Dental calculus develops when plaque, a dense bacterial biofilm that accumulates at the base of teeth, is mineralized when calcium and phosphorus in saliva combine to form calcium phosphate. That hardening process locks bacteria into a crystalline matrix similar to bone, entombing and preserving dead microbes for thousands of years.

“It’s clear that the dental plaques and associated calculus of living individuals contain valuable biological and medical information,” says Christina Warinner, an archaeological geneticist at the University of Oklahoma who was not involved in the study. “It’s also clear that dental calculus deposits preserve over very long periods of time in the archaeological record. So at this point, the question really is, does the information contained in dental calculus also survive that long?”

In an attempt to prove that it does, Cooper and his team—led by graduate student Christina Adler, now a lecturer at the University of Sydney—sequenced DNA extracted from tartar from 34 European skeletons, ranging from Mesolithic hunter-gatherers living between 5,400 and 7,500 years ago to people from the late medieval period. The researchers themselves chipped in with modern samples from their own teeth for comparison.

They were relieved to see that the microbes present in the calculus were different from those on lab equipment, the soil from which the samples were excavated, and, most importantly, from the interior of the teeth themselves. Cooper finally had confidence in the results.

The researchers found that the hunter-gatherers boasted a diverse community of oral bacteria, and did not have many of the groups we now associate with oral disease. But samples from the early Neolithic—when the advent of farming led to the increased consumption of domesticated cereals, such as barley and wheat—showed significantly reduced microbial diversity. Bacterial species associated with oral diseases were much more common in samples from this period, aligning with a documented increase in the prevalence of tooth decay and gum disease in skeletal remains from the dawn of agriculture compared to those from pre-agricultural humans.

The results led the researchers to propose that by switching to a diet dominated by cultivated grains, Neolithic people effectively interrupted long-standing coevolutionary relationships between humans and the microbial communities living in their mouths, robbing themselves of diversity and, by extension, resilience against pathogenic bacteria. “Eating large amounts of soft carbohydrates, which get packed down around the base of your teeth, selects strongly for certain types of bacteria,” says Cooper, “so the ecosystem was swamped with bacterial species that can exploit this resource, and which have a negative impact on oral health.”

According to the team’s analysis, oral microbial communities remained roughly similar until the Industrial Revolution, when things got much worse. After 1850, as Europeans ate more refined carbohydrates and concentrated sugars, DNA from calculus samples shows another, more severe reduction in diversity—and the rise to dominance of pathogenic bacteria, including cavity-causing Streptococcus mutans. For Cooper, this dietary shift resulted in another blow to oral biodiversity and the onset of a “permanent disease state” in which opportunistic pathogens run riot in our mouths, causing tooth decay and gum disease.

These bacteria and the chronic inflammation they provoke have also been associated with modern, lifestyle-related diseases such as diabetes and heart disease, Cooper adds, suggesting that this drop in the diversity of oral microbes—which can find their way into other parts of the body—may have had broader implications for health.

William Wade, an oral microbiologist at King’s College London Dental Institute, says the study is a “major technical achievement,” but takes issue with the analysis. He argues that changes to oral microbial communities are probably more the result of changes in oral hygiene practices than diet. “It might appear obvious that the food we eat is used as nutrients by oral bacteria, but, in fact, diet has remarkably little influence on the composition of oral microbiota,” he says—though sugars are an exception. “A more plausible explanation for the differences seen is the effect of modern oral hygiene, particularly the use of toothbrushes and detergent-containing toothpastes.” Such practices constantly remove plaque, says Wade, resulting in an immature microbial community that happens to provide the perfect environment for streptococci, a group whose numbers fall in overall proportion as plaque is allowed to build up.

Either way, Cooper and his colleagues have helped set genetic archaeology on a promising new path. And since oral bacteria are constantly in contact with the respiratory and digestive tracts, the microbial DNA entombed in calculus could even provide a window onto the evolutionary history of bacteria and disease in other parts of the body. “We never dreamed it would take this long,” says Cooper, “but we’ve created a powerful new tool for archaeology.”