ABOVE: Geoffrey Bove’s home lab is fitted with a rack for rat cages and an electrophysiology rig for recording from neurons in the muscles of anesthetized animals.
COURTESY OF GEOFFREY BOVE

On a video call from his home in Maine, Geoffrey Bove gives me a tour of his animal facility. In a small room off his garage, he points out equipment for conducting electrophysiology recordings on anesthetized rats, an area to clean out the rodents’ plastic cages, and a rack where the enclosures are stacked. And he shows me his rats, to which he gives regular massages as part of a project to see if such manual therapy—a form of complementary and alternative medicine—can prevent or treat the development of fibrosis.

In early 2020, around the time that many researchers temporarily shuttered their labs as the COVID-19 pandemic forced lockdowns and institutional closures around the world, Bove walked out of academia altogether—a move he’d been thinking about for years. He transferred his National Institutes of Health (NIH) grant from the University of New England (UNE), where he was a research professor in the College of Osteopathic Medicine, to a company he’d started more than two decades ago. He then appointed an Institutional Animal Care and Use Committee (IACUC) and obtained clearance from the NIH’s Office of Laboratory Animal Welfare (OLAW) to receive his first shipment of rats from his collaborators at Temple University.

He is currently studying whether massage can stem the development of fibrosis, the accumulation of connective tissue in response to damage, in this case caused by a dose of radiation. As I watch on the screen, he takes a rat out of its enclosure and holds it against him, then begins working on its front leg, all the while explaining the techniques he’s using: skin rolling (pinching and rolling the skin gently) and deep tissue pressure—as deep as you can get on a rodent’s forearm, which isn’t that deep, Bove says—among others. “It actually only takes a few minutes. And then at the end, a good therapist always does a nice little soft flourish,” he says, extending the rat’s arm and letting its fingers spread over his own fingertip before letting the arm fall back to a natural position. 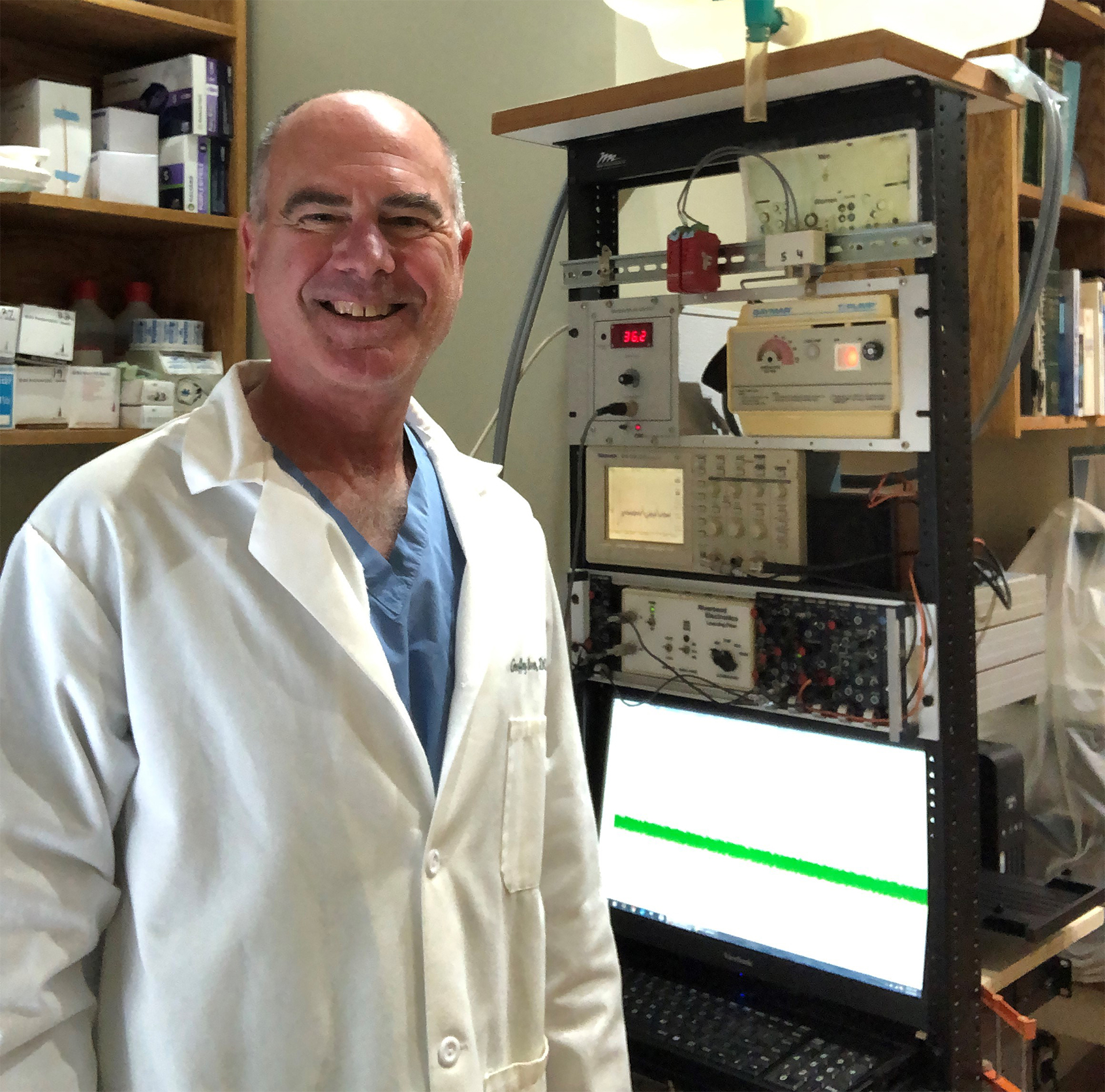 Bove says he had long fantasized about working independently like this. As a chiropractor, he adds, he felt like it was an uphill battle to gain the respect of some in the academic community—chiropractic methods are indeed widely criticized for not being evidenced-based—and long-standing fundamental differences between chiropractors and osteopaths were apparent at UNE, something he says he’d always hoped to change. “One of my overarching career goals was to mitigate that using science and collaboration,” he tells The Scientist. “And I completely and utterly failed.” In the end, Bove just wasn’t happy in his job.

So, in late 2019, he finally made the leap. He began planning his animal room in a space with a private entrance where he used to see patients as part of his chiropractic clinic, installing a separate HVAC system, among other upgrades. And he transferred his R01 grant, which he held jointly with Temple University anatomist and cell biologist Mary Barbe, to his sole proprietor company, Bove Consulting. In January 2020, he gave UNE his notice.

By April last year, less than three weeks after UNE transitioned to mostly online learning as the pandemic ramped up, Bove was fully set up at home, earning a larger salary than he had received at UNE out of his NIH grant money—thanks to greatly reduced indirect costs, which normally go to administrative overhead—and actively pursuing an OLAW assurance, which is required to house and work with laboratory animals.

To obtain that assurance, Bove needed to assemble an IACUC with the requisite members. Bove asked retired pharmacologist David Mokler, his longtime friend and colleague—and his former boss at UNE—to be the chair. The two had already had many discussions about Bove’s desire to leave the university, and Mokler says he had his doubts about whether Bove could pull it off. “When we first started talking about this a few years ago, I said, ‘Geoff, you’re never going to be able to,’” recalls Mokler, who is now retired. But Bove was persistent, Mokler adds. “He says, ‘What are the regulations? What is it that says I can’t do this?’” So when Bove investigated and determined there was no reason he shouldn’t be able to head out on his own, Mokler agreed to chair his IACUC. Bove, he says, is “one of the most innovative people I know.” Bove’s OLAW assurance came through on June 1, 2020. “The timing couldn’t have been better,” he says. A couple of months later, he received his first shipment of animals.

The experiments that Bove is starting on now are the continuation of work that he and Barbe have been doing for the last several years. With existing NIH funding, he, Barbe, and their colleagues have suggested that massaging rats can reduce the development of inflammation and fibrosis, and the resulting pain, associated with repetitive tasks—in the animals’ case, pulling a bar, which the team uses as a model for tendinitis, carpal tunnel syndrome, and other so-called repetitive motion disorders in humans. Researchers have previously tried and failed to find evidence that manual therapy is an effective treatment for carpal tunnel in humans, but Bove argues that prevention might be possible, and says he is currently working to publish additional data in rats supporting the idea that reversing changes associated with repetitive motion is not as easy as preventing them.

“This work might be considered a little more fringe,” says Eric Chang, a neuroscientist at the Feinstein Institutes for Medical Research who has not worked with Bove or Barbe. “But judging from the work alone, it seems to be well conducted and with controls.”

When we first started talking about this a few years ago, I said, “Geoff, you’re never going to be able to.”

Encouraged by their findings, Bove and his collaborators have since collected preliminary data from new experiments to apply for a new NIH grant to extend the work into rats that have been irradiated, as part of a project to see if manual therapy could help reduce fibrosis and discomfort in cancer patients undergoing or recovering from radiation treatments. (Massage is often considered beneficial to cancer patients’ mental state as they endure the challenges of the disease and therapy, though several major health organizations advise against deep tissue pressure for certain types of cancer.)

“I typically use pharmaceutical approaches” when treating fibrosis and inflammation, Barbe says, but some people suffer from side effects that come with drugs, so “non-pharmaceutical approaches are also needed.”  While the use of massage is not well accepted beyond short-term benefits in treating certain types of pain, Barbe claims her work with Bove supports the idea that manual therapy could be “used for treating not just the symptoms but also the underlying mechanisms of change that overuse injury causes, including fibrosis,” and this is what they are investigating.

The setup that Bove uses now works well, according to Barbe, but the transition from UNE to Bove Consulting in the midst of his NIH-sponsored research project took quite a few conversations and a lot of paperwork, she says. “A big group of people worked for three [or] four months to make sure all assurances were correct, complete, compliant.” Then again, “that’s really the life of a scientist,” she adds. “There are many rules, regulations, and you just have to be willing to understand them and do them and comply.” Bove approached the task intently, she says, and as a result, “he’s still a scientist and he’s doing scientific research.”

While the NIH Office of Extramural Research declined to comment on specifics of Bove’s situation, an agency spokesperson confirmed in an emailed statement to The Scientist that “[m]any NIH grant mechanisms allow for a change of recipient organization when certain conditions are met, subject to prior approval by NIH, as noted in the NIH Grants Policy statement. The new institution must be able to support the incoming grant(s) technically, scientifically, and administratively.”

Mokler is now collaborating with Bove on a new project, funded by Vancouver-based Havn Life, a young company that is pursuing psychoactive treatments to support mental health and improve “human performance” and where Mokler serves as scientific advisor. The goal of the work is to explore what effects psilocybin, the active ingredient in hallucinogenic mushrooms, has on inflammation in rats, if any. To do that work, Bove needs approval from the Drug Enforcement Administration (DEA) to receive a shipment of the drug. If his application is successful, Bove will administer it to rats purchased from a commercial vendor while tracking levels of cytokines in their blood. Because of his involvement in the funding company’s research, Mokler recused himself from Bove’s IACUC for oversight of this particular project.

Tim Moore, the CEO of Havn Life, says Bove’s unusual situation working out of garage lab didn’t concern him in the least. “I think all of us have changed our lenses on working from home in the midst in the pandemic,” Moore says. “Given that the protocols need to be there, and his extensive experience, I had no anxiety at all about that. . . . This may just be a stepping stone to future work, with him or some of his associates.”

For now, Bove explains as he demonstrates a rat massage over video chat, he has only four irradiated animals remaining. Several others involved in this particular experiment have already been euthanized and sent to Barbe for tissue analysis. He and Barbe submitted a grant application on March 1 to obtain funding to continue this work.

Whatever research Bove ends up doing in his home laboratory in the years to come, he says he’s happy to be there: he doesn’t miss academia, and he doesn’t miss his private chiropractic clinic, which he closed a few years ago. “I like rats better than I like people, it turns out.”