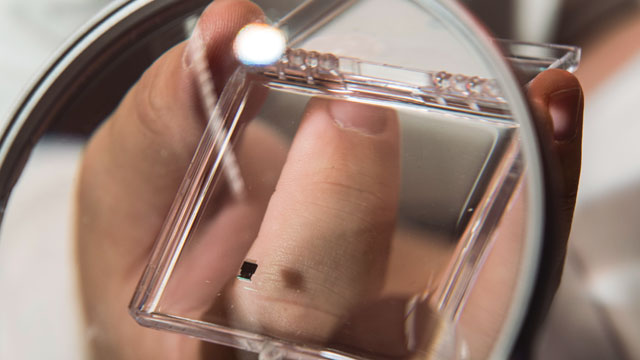 Rice University chemical and biomolecular engineer Sibani Lisa Biswal was familiar with using microcantilevers to study DNA structure and dynamics and to characterize protein interactions with artificial cell membranes. Her postdoc advisor at the University of California, Berkeley, had used the molecular-size diving boards to detect prostate cancer antigen. So when Stanford graduate school friend Nitsara Karoonuthaisiri, now at the National Center for Genetic Engineering and Biotechnology (BIOTEC) in Thailand, asked Biswal about the possibility of using microcantilevers to detect food-borne pathogens, she couldn’t see why it wouldn’t work.

“[Microcantilevers] are becoming so common, people are doing some really cool things,” says Jeff Rhoads, a mechanical engineer at Purdue University. In particular, he notes, there has been “growth in...

Last year, Karoonuthaisiri screened millions of viruses, searching for phages that would bind tightly to Salmonella enterica, many subspecies of which cause food poisoning. She isolated surface peptides from those phages that stuck best and sent them to Biswal, whose student, Jinghui Wang, attached them to microcantilevers and tested how well they could detect bacteria in solution. Wang had previously developed microcantilevers that could detect and quantify concentrations of TNT as small as 0.1 nanograms per milliliter, “so it was easy to go ahead and change the mode from something like explosives to food-borne pathogens,” Biswal says.

Microcantilevers are made of two different materials, laid one on top of the other, that expand and shrink to different extents in response to environmental or physical changes, such as temperature differences or the binding of molecules. Using a laser and a photodiode, researchers can measure the degree of cantilever bending as a result of the tension between the two layers. This “makes it very sensitive to a number of different targets, [including] targets that are usually difficult to detect with other technology,” Biswal says.

Not only were Biswal’s and Wang’s microcantilevers able to recognize pathogenic bacteria, they would bend to different degrees depending on which species bound, allowing the researchers to distinguish between Salmonella, Listeria monocytogenes, and Escherichia coli. Microcantilevers covered in one particular peptide, MSal 020417, could even distinguish between subspecies, or serovars, of Salmonella, something even Salmonella-specific antibodies can’t do.

“They’re using phages and peptides to functionalize the surface of these beams, and using that to great effects,” says Rhoads.

The microcantilevers could only detect bacterial populations of at least a million microbes per milliliter, however, making them far less sensitive than other screening assays. “When people worry about bacterial contamination, they worry about maybe one CFU [colony-forming unit] per milliliter, or 10,” says bioanalytical chemist Antje Baeumner of Cornell University.

To detect lower levels of bacteria that might be contaminating food, researchers would first have to culture the bacteria to boost population sizes, a process known as enrichment, which can take up to a day. “Even though the test itself is very fast, the time to pre-enrich has added 24 hours or so,” says Sam Nugen, who develops pathogen-detection systems at the University of Massachusetts Amherst.

Moreover, Nugen adds, so far the microcantilevers have only been tested with cultures of pure bacteria. So to determine whether a food item was contaminated, “you would need a clean way to extract [the pathogen],” he says. “You couldn’t take a piece of chocolate-chip cookie dough and stick it on a microcantilever.”

“The next big step for us is actually showing how well it will work in a crowded environment,” agrees Biswal. “We’re flowing just cells. If you had cells and other large globular proteins, how well will our system work?”

Even at this stage, though, Biswal says there has been a lot of interest in commercializing the technology. “We’re in discussions right now,” she says. “I haven’t narrowed down if we’re going to pick someone to collaborate or make it available to multiple groups to see how different applications could use this. We’re trying to navigate the waters right now.”