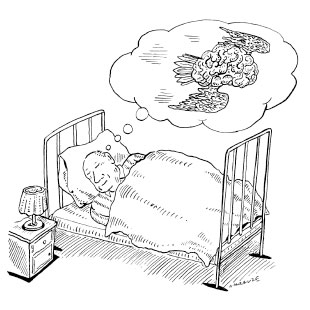 ANDRZEJ KRAUZEPrefrontal leucotomies—surgeries to cut a section of white matter in the front of the brain, thus severing the frontal lobe’s connections to other brain regions—were all the rage through the 1950s as treatments for psychoses. The operations drastically altered the mental state of most patients. But along with personality changes, dulled initiative, and reduced imagination came a seemingly innocuous effect of many of these procedures: the patients stopped dreaming.

Mark Solms, a neuropsychologist at the University of Cape Town in South Africa, uncovered the correlation in historical data from around the globe as part of a long-term study to assess the impact, on dreams and dreaming, of damage to different parts of the brain. Between 1985 and 1995, Solms interviewed 332 of his own patients at hospitals in Johannesburg and London who had various types of brain trauma, asking them about their nightly experiences.

Advances in neuroimaging have lent more support to Solms’s brain map, and pinned down other areas that researchers now understand play a part in dream development. In 2013, Bill Domhoff, a psychologist from the University of California, Santa Cruz, and colleagues from the University of British Columbia published results that combined neuroimaging scans from separate studies of REM sleep and daydreaming. They discovered that brain regions that light up when there’s a high chance that one is dreaming overlapped with parts of the brain’s default mode network—regions active when the brain is awake but not focused on a specific external task (Front Hum Neurosci, 7:412, 2013). “It very much lines up,” says Domhoff. “It’s just stunning.”

The default mode network allows us to turn our attention inward, and dreaming is the extreme example, explains Jessica Andrews-Hanna, a cognitive scientist at the University of Colorado Boulder. The network takes up a large amount of cortical real estate. Key players are regions on the midline of the brain that support memories and future planning; these brain sections connect to other areas affecting how we process social encounters and imagine other individuals’ thoughts. “When people are sleeping—in particular, when they’re dreaming—the default mode network actually stays very active,” says Andrews-Hanna. With external stimuli largely cut off, the brain operates in a closed loop, and flights of fancy often ensue.

We usually take the bizarre nature of these experiences at face value.  “Even in a completely crazy dream, we all think that it’s normal,” says Martin Dresler, a cognitive neuroscientist at Radboud University in the Netherlands. Dresler and many other researchers attribute this blasé acceptance to the deactivation of a brain region called the dorsolateral prefrontal cortex. When we sleep, the dorsolateral prefrontal cortex powers down, and higher executive control—which would normally flag a nonsensical concern, such as running late for a class when you haven’t been in school for a decade, as unimportant—evaporates. “You have this overactive default mode network with no connectivity, with no communication with regions that are important for making sense of the thoughts,” says Andrews-Hanna.

In healthy sleeping subjects, these executive functions can be unlocked in what’s known as lucid dreaming, when the prefrontal cortex reactivates and sleepers gain awareness of and control over their imagined actions. A lucid dreamer can actually “direct” a dream as it unfolds, deciding to fly, for example, or turning a nightmarish monster into a docile pet.

Records of lucid dreaming are limited to REM sleep, the sleep stage where the brain is most active. REM sleep normally induces paralysis to prevent people from acting out their dreams, but the eye muscles are exempt, and this gives skilled lucid dreamers a way to signal their lucidity to researchers.

Dresler’s team is using this phenomenon as a tool to ask specific questions about dreams. Before trained lucid dreamers fall asleep in Dresler’s lab, they agree to flick their eyes from left to right as soon as they realize within a dream that they’re asleep. The dreamed movement causes their actual eyes to move in a similar way under their closed eyelids. Researchers mark this signal as the beginning of a lucid dream, and then track brain patterns associated with specific dreamed actions. Dreaming also occurs in non-REM sleep, but with the brain less active, the eye muscles won’t respond to dream input—so there’s no robust way to tell if lucid dreaming takes place.

When subjects achieved lucidity and consciously dreamed that they performed a predetermined hand movement, Dresler’s research team observed activity in the sensorimotor cortex matching what would occur if the subjects actually moved their hands while awake (Curr Biol, 21:1833-37, 2011). “It’s probably the case that, for most of what we are dreaming about, the very same machinery and the very same brain regions are active compared to wakefulness,” says Dresler. “It’s just that the motor execution is stopped at the spinal level.”

Beyond sleep research, tracking lucid and normal dreaming offers an investigative model to study aspects of psychosis, according to some researchers. “These regions that are activated during lucid dreaming are typically impaired in patients with psychosis,” explains Dresler. “Having insight into your non-normal mental state in dreaming shares neural correlates with having insights into your non-normal state of consciousness in psychosis.” Dresler proposes training patients in early stages of psychosis to dream lucidly, in the hope that it might grant them some therapeutically relevant understanding of their illness.

While executive functions are impaired in many patients suffering from psychosis, their default networks seem to be overactive, says Andrews-Hanna. But how much similarity exists between the brain states of dreaming and psychosis remains controversial. Domhoff emphasizes the unique nature of dreams. “They’re not like schizophrenia, they’re not like meditation, they’re not like any kind of drug trip,” he says. “They’re an enactment of a scenario that is based upon various wishes and concerns.”

Ultimately, says Solms, deciphering dreaming furthers the field’s knowledge of what the brain does, as much as studies conducted during waking hours. “If you’re a clinician, and you understand what the different parts of the brain do in relation to dreaming, then it’s one of the things you can use as a road map for evaluating your patients.”