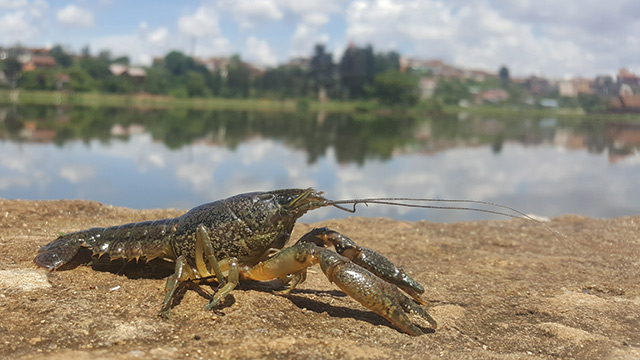 WHO’S YOUR CRAWDADDY? The highly invasive marbled crayfish, pictured here in Madagascar, might trace its origins to a German aquarium.RANJA ANDRIANTSOAAt first glance, the marbled crayfish (Procambarus virginalis), a medium-size decapod crustacean with a speckled brownish-green shell, seems rather unexceptional. But since it first appeared on the German hobby-aquarium scene around two decades ago, the creature has been making waves. The clonally reproducing, all-female animals have been spotted in numerous freshwater habitats across Europe, and, according to a recent analysis, they’re spreading swiftly through the island nation of Madagascar. While this rapid expansion has alarmed scientists due to the crayfish’s ability to alter aquatic ecosystems by outcompeting native species, the organism captured the attention of some researchers for another reason: the mystery of its origin.

The first scientific description of the marbled crayfish was published in the early 2000s. Shortly before that, rumors about an...

Although parthenogenesis is prevalent among crustaceans, this was the first known instance of the reproductive strategy in a decapod, a subgroup that includes lobsters, crabs, and prawns. Immediately, the researchers realized the potential threat the creature could pose to aquatic life—one specimen, if introduced to a freshwater habitat, could rapidly expand and outcompete local populations of crayfish and fish. So after unveiling the findings, Scholtz says, “we alerted the public, saying that a single individual animal could colonize a lake or a river because it doesn’t have to find a partner—so this might be a problem for the European environment.”

Crayfish, in general, seem to be good invaders for a few reasons, says Brian Roth, a fish ecologist at Michigan State University. For one, they have wide-ranging feeding habits, which include munching on plants, capturing insects, and scavenging for dead animals. Secondly, Roth says, researchers have recently realized that the crustaceans can adapt to colder temperatures than scientists previously realized. In the U.S., for example, the red swamp crayfish (P. clarkii), a species native to the southern states, has spread northward to the Great Lakes.

But being able to reproduce without a mate allows P. virginalis to take invasion to another level. Starting around 2005, researchers began noticing these animals being sold in food markets in Madagascar—and when another team of scientists compared these creatures to other crayfish in the region, it discovered that P. virginalis had “insanely high fecundity,” says Julia Jones, a conservation science professor at Bangor University in the U.K. who participated in the study (Biological Invasion, 11:1475-82, 2009). “We were worried that they were going to spread very fast—and sure enough, they have.”

Although scientists were tracking the crayfish’s rapid spread, where, exactly, it came from remained a puzzle. Scholtz’s 2003 study provided some hints: when they sequenced the animal’s mitochondrial genes, the researchers found that its closest relative was P. fallax, a similar-looking, sexually reproducing species from Florida. Although it’s possible that the first marbled crayfish was shipped to Germany from the U.S., to date no wild American populations have been found, and some scientists point to another theory—that P. virginalis was born in captivity.

This latter hypothesis stems from the marbled crayfish’s earliest known appearance, recently established by molecular biologist Frank Lyko of the German Cancer Research Center who scoured the internet to track down the first known person that possessed one of the clonally reproducing creatures (Zootaxa, 4363:544-52, 2017). As the story goes, a German biologist and hobby aquarist purchased a bag full of crustaceans labeled “Texas crayfish” from an American trader at a fair in Frankfurt in 1995. He took the creatures back home and added them to his aquarium; a year later, he had hundreds, which he distributed among other aquarists. “We can trace the animal back to 1995, back to the trade fair,” says Lyko. “[But] we don’t know what the American trader actually sold, whether it was already a marbled crayfish or the parents of the first marbled crayfish.”

He purchased a bag full of crustaceans labelled “Texas crayfish” from an American trader.

A new study by Lyko and his colleagues offers a clue, and suggests that, rather than being born in a wild population in the U.S., the first marbled crayfish may have actually been conceived in this German biologist’s aquarium. After sequencing and analyzing the crustacean’s entire genome, the team discovered that the animal, which possessed a triploid genome as determined previously by Scholtz and his colleagues, also carried an AA’B genotype, meaning that of its three sets of chromosomes, two were similar and one was unique (Nat Ecol & Evol, 2:567-73, 2018). “We interpret the genome to reflect the situation that [the original] father and mother were both from the same species but distantly related populations,” Lyko says. In addition, he adds, because genetically distinct groups of the same species rarely share the same habitat—genetic exchange through sexual reproduction would result in a relatively homogeneous population—it’s likely that such a situation would have occurred in an aquarium, rather than out in the wild.

This hypothesis is “reasonable, but very speculative,” says Scholtz, who did not take part in this work. Most documented cases of triploid genomes are thought to be a consequence, rather than a cause, of parthenogenesis, he notes: because asexual reproduction can make offspring more susceptible to genetic mutations, it can be advantageous to evolve three sets of chromosomes as a “buffer against damaging changes.”

Lyko and his team also compared the genomes of marbled crayfish from various regions in the world—Germany, Madagascar, and the U.S.—and found remarkably little genetic variation. “The conclusion from that was that the global population of marbled crayfish is clonal, with one origin,” Lyko says. “And now it’s spreading globally.” Indeed, when the team examined the crustaceans’ spread in Madagascar, the researchers discovered that between 2007 and 2017, the marbled crayfish’s geographic range increased 100-fold, and by the last count in March 2017, the country harbored millions of these animals. While the sale and possession of this crayfish are currently banned in Europe, such regulations do not yet exist in Madagascar. There, the extent of the spread is “absolutely shocking,” says Jones, who has collaborated with one of the current study authors, Jeanne Rasamy of the Université d’Antananarivo in Madagascar.

Although unraveling the marbled crayfish’s origins may not help curb its spread, Lyko and his colleagues hope that by further analyzing this crustacean’s biology, they will be able to better understand how, exactly, the creature is able to adapt so well to different environments, despite having such low genetic diversity. “Our hypothesis is that the adaptation is facilitated by epigenetic mechanisms,” Lyko says. “[That’s] the next thing on the agenda.”