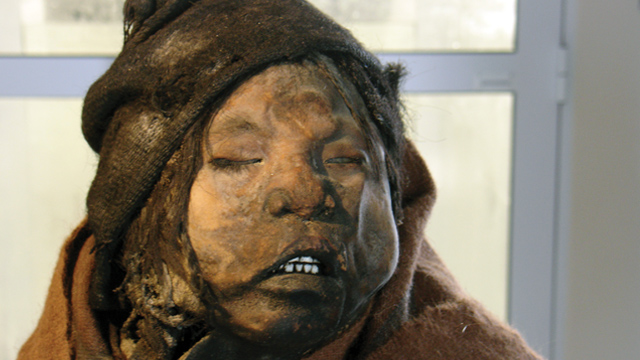 In 1999, high in the bone-dry plains of the Atacama Desert in Argentina, Johan Reinhard, currently the Explorer-in-Residence at the National Geographic Society, and colleagues uncovered three exceptionally well-preserved corpses. Two children, a girl and a boy aged 6 and 7 respectively, and a 15-year old adolescent they named “the Maiden” had all been sacrificed some 500 years ago and buried near the summit of one of the world’s highest volcanoes, Llullaillaco.

The conditions of preservation in the high Andes were so unique that to prepare the mummies for display in Salta, Argentina, curators there consulted forensic anthropologist Angelique Corthals, then at the American Museum of Natural History, to recreate the extreme cold and dryness required to keep the bodies looking fresh and...

She sampled sputum (mucus coughed up from the lower airways) from the mummies to test whether they had been sedated before their sacrifice, likely with a kind of corn liquor. Corthals also sampled a bloodstained portion of cloth found near the 7-year-old boy’s mouth. She used proteomics to map the proteins in the blood sample to determine where in the body the blood had come from, since different sets of proteins are found in the gut compared to the lungs, for example. When Corthals saw the blood profile, she began to realize just how rich in information it was.

“We never expected we would have such a slew of proteins coming out of the sample. We couldn’t believe the result,” says Corthals. It was so amazing, they ran it again, and got the same bounty of proteins. “We realized the proteins were better preserved than we thought they would be, and we ran very accurate mass spectrometry, which gave us this amazing profile.”

The success of the method, called shotgun proteomics, allowed Corthals and the team to answer deeper questions about the mummies. In previous CT scans they had noticed that the eldest mummy, the Maiden, had lesions on her lungs that could indicate infection. They could even see streaks of mucus under both nostrils.

Researchers had previously detected pathogens in ancient samples using DNA analysis, but linking the presence of microbes to a disease state is tricky because some bacteria, for example Mycobacterium tuberculosis, can persist in an individual for a prolonged time period without causing active infections. Detecting the immune response of a host, which indicates an active infection, is also possible, but requires the use of antibody-binding immunoassays, which are prone to false positives and negatives when used on archaeological samples.

This work proves that modern instrumentations and techniques are capable of minimizing the guesswork
in forensic and historical sampling.
—Mehdi Moini, Museum Conservation Institute at the Smithsonian Institution

Corthals compared the Maiden’s extensive protein profile to a database containing 87,061 human protein sequences, and found elevated levels of proteins associated with immune response to inflammation of the lungs, similar to those seen in chronic obstructive pulmonary disease and mycobacterial infection.

The team used the boy’s protein profile as a control, since he showed no signs of infection in CT scans and radiology analysis (the blood on the cloth was deemed the result of trauma) and had likely undergone a similar amount of protein degradation. The Maiden’s inflammatory and immune-response proteins were elevated compared to the boy’s, while all other protein levels were comparable.

Mehdi Moini of the Museum Conservation Institute at the Smithsonian Institution, who has recently demonstrated the use of proteomics in dating archaeological samples, says Corthals’s work is “yet another fine example of the application of modern mass spectrometry and proteomics technologies to anthropology and museum specimens.” He says that this new approach “not only shows the presence of the pathogen, it also demonstrated that the pathogen actually produced an active infection.”

As well as corroborating the evidence from CT scans and radiology analysis, Corthals’s team constructed the DNA profile of the samples to probe what pathogen was responsible. Phylogenetic analysis revealed the most likely culprit as part of the pathogenic Mycobacterium avium-bovis-tuberculosis complex.

“This work proves that modern instrumentations and techniques are capable of minimizing the guesswork in forensic and historical sampling,” says Moini. While 500-year-old mummies were used in this case, Corthals, now at the City University of New York’s John Jay College of Criminal Justice, is enthused about myriad potential applications and has already been swamped by e-mail requests for new collaborations. “I’m not going to stop at ancient remains,” she says. “One of the interesting things would be to work on the frozen bodies that were preserved with the flu virus from the Spanish flu and see whether we can say anything about the immune system of these people that died from the flu.”

Currently, Corthals is working with a team from Brussels University in the “Valley of the Nobles” outside Luxor, Egypt, where she is uncovering 3 millennia of human activity, from high-ranking nobles who lived around 1400 BC to Napoleonic soldiers who were ambushed in the region and had their bodies dumped in one of the Valley’s tombs at the beginning of the 19th century. Corthals set up the first ancient-DNA lab in Egypt to try to use genetic analysis to identify the missing mummy of Queen Hatshepsut, one of Egypt’s most powerful rulers.

Proteomics could now help solve some of ancient Egypt’s most captivating mysteries, such as what really killed the boy king Tutankhamen. “It would be nice, but it would be more challenging, because King Tut’s mummy is more damaged, so I don’t know what kind of profile we would get,” Corthals says. “But it would be very interesting to see even a partial profile.”