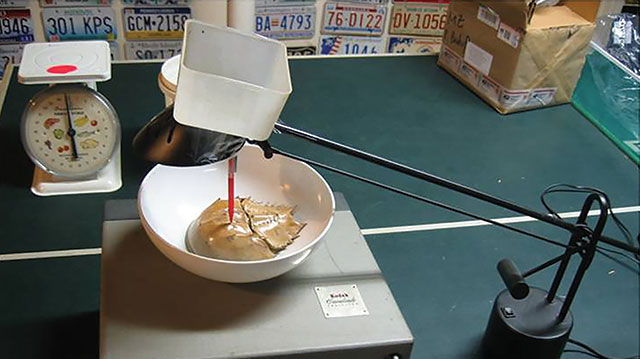 CRACKING CRABS: Laub’s colleague used this apparatus to measure the force needed to penetrate the shell of a horseshoe crab.RICHARD S. BERKOF

Eurypterids, or sea scorpions, immediately caught paleontologist Richard Laub’s attention when he became a curator at the Buffalo Museum of Science in 1973. Browsing the museum’s fossil collection, he was impressed with the formidable clawlike mouthparts of the largest of this extinct group of arthropods, the pterygotids. Reaching lengths of more than 2 meters, the aquatic animals hold the title as the largest arthropods to ever live, and Laub didn’t have much doubt about the utility of their giant pincers. “I thought they were a combination fishing spear and can opener,” says Laub, now retired. “It seemed obvious.”

But a few years ago, when Laub finally got around to testing his hypothesis, he found out that the claws were simply not strong enough to stab and crush armored prey without breaking. Rather, it seemed, the structures were more adapted for scavenging or pulling and tearing at soft-bodied prey (Bull Buffalo Soc Nat Sci, 39:29-42, 2010). “I discovered, as I had earlier in my career, as you enter scientific research, check your ego at the door,” he says. “My assumptions had been wrong.”

They weren’t just Laub’s assumptions. For years, researchers had presumed pterygotids to be a top predator of the world’s Paleozoic waterways. But Laub and colleagues’ work suggests that this was not the case. And this year, a team at Yale University uncovered more evidence that these large arthropods, which lived between 450 million and 400 million years ago, were not so scary after all.

For his final project in Yale paleontologist Derek Briggs’s class on exceptionally preserved fossils, graduate student Ross Anderson closely examined a collection of eurypterid fossils housed at the Yale Peabody Museum of Natural History. These particular specimens fit with the theme of the class in that the eyes—a soft part of body that typically doesn’t fossilize—were well preserved. Taking inspiration from a technique recently used by John Paterson’s group at the University of New England in New South Wales, Australia, to examine the eye of another extinct predator (Nature, 480:237-40, 2011), Anderson, Briggs, and their colleagues measured the number, size, shape, and angle of the lenses of the pterygotid species Acutiramus cummingsi.

I discovered, as I had earlier in my career, as you enter scientific research, check your ego at the door.—Richard Laub,
Buffalo Museum of Science

“When we get fossils like the ones we have, where some of the soft parts are preserved,” says Anderson, “then you can start to, in much more detail, discover how this organism lived, more about its morphology, and, in this case, anatomical detail about how the eye actually functioned.”

The researchers used high-resolution photographs and a light microscope to examine the fossilized bands of cuticle that run between the lenses that make up the large A. cummingsi’s compound eye. They then compared their results with similar features in smaller eurypterids, as imaged by a scanning electron microscope, and in modern-day organisms such as the horseshoe crab, eurypterids’ closest living marine relative. “The problem with doing any kind of biomechanics or functional analysis of a fossil is that, given the distance in time and the number of unknowns, it’s pretty much impossible to produce meaningful numerical values,” says Briggs. “So what’s much more powerful is if you can compare two things.”

They found that A. cummingsi had a relatively small number of fairly large lenses, and that the angles between the lenses were greater than those of modern arthropod predators (Biol Letters, 10:20140412, 2014). The data suggested that this large eurypterid did not have the sharp eyesight one might expect of a finely tuned killer. “The larger predator doesn’t have the kinds of attributes in the eye that you’d expect by comparison with modern arthropods,” says Briggs. Rather, he observes, the eye anatomy suggests the animal may have seen well in low light, a quality that would have been advantageous for a bottom-dweller or night feeder. “Then our hunch was . . . maybe it was feeding on slow-moving, soft-bodied things that we don’t have any record of.”

“Derek Briggs and his colleagues’ conclusion correlates well with our conclusion,” says Laub. “Instead of these creatures being T. rexes of the past, actually I think a better model is long-necked sauropod dinosaurs, which developed, if you will, a strategy of gigantism to make themselves less accessible to predators.”

“The old vision of Acutiramus . . . swimming around rapidly and terrorizing other eurypterids, I think is almost certainly an exaggeration,” Briggs agrees.