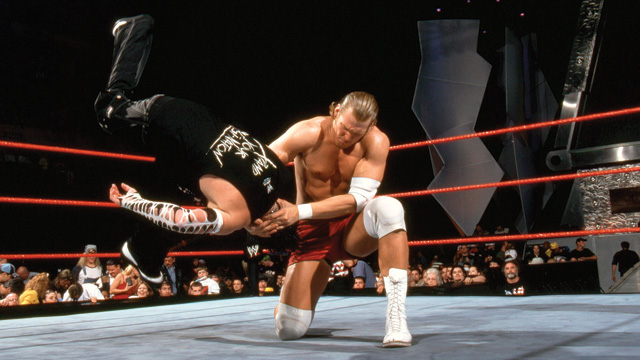 In the middle of a July night in 2003, Chris Nowinski woke up on the floor of his hotel room in Terre Haute, Indiana. The lamp on the bedside table was broken, as was the table itself, and he had no idea what had happened. According to his girlfriend, he had stood up on the bed, tried to climb the wall, and then jumped off the bed, taking out the nightstand on the way down. All he could remember was trying to catch something that was falling, but apparently it had all been just a bad dream.

Though he had never sleepwalked before, Nowinski, a professional wrestler, had an idea why the strange episode had occurred. About a month earlier, he had taken a blow to the head during a match. “Bubba gave me a boot to the chin that...

Over the next few years, Nowinski started digging into the scientific literature on repeated concussions. He even wrote a book, Head Games, on the topic. “I realized that if everybody knew what I was learning about brain trauma and sports, we would change how we played the games,” he says. Then, in 2007, he teamed up with Robert Cantu, a neurosurgeon at Emerson Hospital in Massachusetts, to launch the Sports Legacy Institute to study the treatment and prevention of brain trauma in athletes. In 2008, the Institute joined forces with Boston University School of Medicine, forming the Center for the Study of Traumatic Encephalopathy, to which more than 350 current and former athletes, including 60 retired NFL players, have pledged to donate their brains for study. Many of the athletes have also agreed to be monitored over the years for mental and physical changes. Blows to the head are a common occurrence in contact sports, including football, hockey, and boxing, among others. Concussions can result in headaches and transient neurological impairment, but the effects are usually short-lived, and the vast majority of patients recover within a week or two. Some individuals, however, particularly those who have suffered repeated blows, may appear to have recovered but later suffer more serious, progressively worsening effects, including personality changes, memory problems, difficulty processing information, and even full-blown dementia. (See “Vital Signs,” The Scientist, April 2011 and “Personalized Athletics,” The Scientist, August 2011.)

In 1928, Essex County, New Jersey, medical examiner Harrison  Martland first described the symptoms associated with repeated head trauma, dubbing the condition “punch drunk.” Until recently, it was almost exclusively studied among professional boxers, and in 1937 was given a new name: dementia pugilistica. The disease now goes by the name of chronic traumatic encephalopathy (CTE), and the symptoms and neurological characteristics that define it are finally coming into focus.

After reviewing documented autopsies of CTE patients, Nowinski and his colleagues found that several of their brain regions had degenerated, including the frontal lobes, medial temporal lobes, hippocampus, amygdala, and brainstem. The researchers also noted the accumulation of abnormal protein deposits known as tau-immunoreactive neurofibrillary tangles—similar to those found in Alzheimer’s patients, but with a distinct distribution in the brain—and other microscopic abnormalities.

This August, neurosurgeons Joe Maroon and Russell Blaylock published the first comprehensive theory regarding CTE’s pathogenesis (Surgical Neurology International, 2:107, 2011). The pair proposed that CTE results from the body’s innate immune response working in overdrive. “If you get a splinter under your fingernail, within seconds it becomes red, hot, swollen, and painful,” says Maroon, a clinician and lecturer at the University of Pittsburgh Medical Center and the Pittsburgh Steelers’ team neurosurgeon. “We believe there’s a similar inflammatory response in the brain with a traumatic insult.” Specifically, neuronal support cells called microglia release cytokines, chemokines, and other agents that cause neural inflammation. Normally, this response is neuroprotective, Maroon says, but “if you get repetitive blows to the head before the brain has healed, this normal repair process gets stuck in the accelerated mode and continues to pour out inflammatory agents, which leads to neurodegeneration and CTE.”

But the mechanism of CTE is not the only unanswered question, Nowinski says: “We don’t have diagnostic criteria in living people, so we don’t have a test and we don’t have treatment.”  As a result, the disease is grossly underdiagnosed, often confused with Alzheimer’s disease or ALS. But “there’s a certain pattern of atrophy with CTE,” he says. “In theory, we should be able to diagnosis it off imaging.”