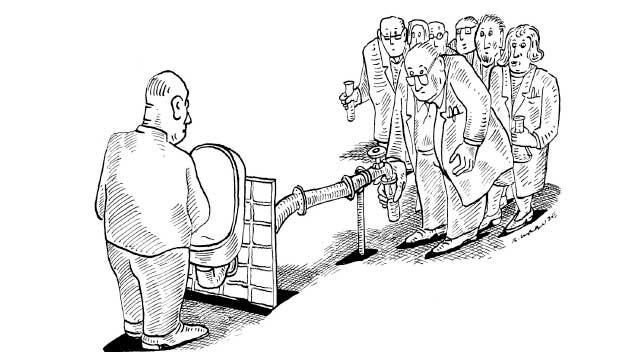 Karim Si-Tayeb was looking for a way to make induced pluripotent stem cells (iPSCs) from patients with hypercholesterolemia. The INSERM researcher was familiar with cell lines and a mouse model of the disease, “but all those models are lacking something that will give us a better understanding of PCSK9,” a protein involved in regulating cholesterol levels whose gene is mutated in hypercholesterolemia.

iPSCs could give Si-Tayeb a truly patient-centric view. Previously, as a postdoc at the Medical College of Wisconsin, Si-Tayeb had succeeded in generating iPSCs from fibroblasts and blood, but these too had drawbacks. He had to wait months to receive hospital approval for taking skin biopsies, and many patients didn’t want to volunteer.

When he moved to France to join the INSERM lab at Nantes University in 2012, Si-Tayeb’s job was to establish iPSC protocols. As he was catching up on the literature, he came...

People had forgotten about the potential uses of urine, because it’s a fluid you discard and, consequently, people associate it with something . . . that is not useful.—Miguel Esteban,
Guangzhou Insti­tutes of Biomedicine and Health

Si-Tayeb opted for the approach using episomes, and isolated somatic cells—their identity not entirely clear—from the urine of 38 volunteers, some with mutations in PCSK9. Although a 30 mL urine sample might only have a few living cells among a sea of dead ones, they proliferated on cell culture plates. “It’s that easy,” he says. He then reprogrammed them into iPSCs and differentiated them into cells resembling hepatocytes, which served well as models of hypercholesterolemia (Dis Model Mech, 9:81-90, 2016). “Looks like it’s pretty equivalent to iPSCs from skin, blood, or even embryonic stem cells.”

Esteban says he got the idea to use urine-derived cells for iPSCs after moving to China in 2008. Although fibroblasts were an easy-to-use source for reprogramming, they were tough to collect. “When you go to a person and ask, ‘Can you give me some cells?’ apart from being concerned they also say, ‘Is it going to hurt?’ And you have to say, ‘Maybe a little bit.’ And that puts people off.” In China, he found, people were even more reticent to donate skin cells than in Europe.

So he went off in search of other tissues. A friend who is an orthopedic surgeon provided Esteban with bone, which delivered iPSCs with high efficiency, but the invasiveness of the technique kept him looking for another option. He also tried saliva and mouth swabs, but those failed. One day, a phone conversation with a collaborator in Vienna who used urine for other cell biology purposes sparked the idea to try pee. Two students from the Austrian group soon came to Esteban’s lab in China, “and within several months we established the protocol of cell collection and started reprogramming the cells.”

Since the 1970s, scientists have known that living cells persist in urine. A little more than a decade ago, Yuanyuan Zhang, a urologist at Wake Forest School of Medicine in Winston-Salem, North Carolina, became interested in these cells for their potential use in urethra reconstruction. “If I can get urine stem cells in culture I don’t need to biopsy [patients],” he says. One Friday, years ago, he had been culturing urine-derived cells and forgot to change the media before he left the lab for the weekend. He came back to work the next week and found one colony of cells that had grown considerably. “I just let it grow, and the colony got bigger and bigger,” he recalls.

Previous attempts to culture cells from urine had not yielded much success; 99 percent of cells, likely terminally differentiated, didn’t stick to the plates and washed away. Those that did grow petered out after a few days. To find more of the stably proliferating cells, Zhang collected urine from about two dozen volunteers and found again that a tiny proportion—roughly two cells in every 100 mL of urine, or 0.2 percent of the cells present—would form colonies lasting weeks on end and could differentiate into different lineages (J Urol, 180:2226-33, 2008).

Initially, Zhang thought the progenitor cells originated in the bladder. But his later study of urine-derived cells suggested they came from the kidney. Several of the female volunteers had received a kidney from a male donor, and the progenitors possessed a Y chromosome (Stem Cells, 31:1840-56, 2013).

The recent interest in urine as a source of stem cells is just the latest episode in a long history of the substance’s utility in biomedicine. Hippocrates, for instance, knew that urine would become sweeter if someone had diabetes—too much glucose in the blood—using the taste of pee as a diagnostic. “But for a long time I think people had forgotten about the potential uses of urine, because it’s a fluid you discard and, consequently, people associate it with something, if not dirty, something that is not useful,” says Esteban. “But I think in the last few years . . . things have been changing.”