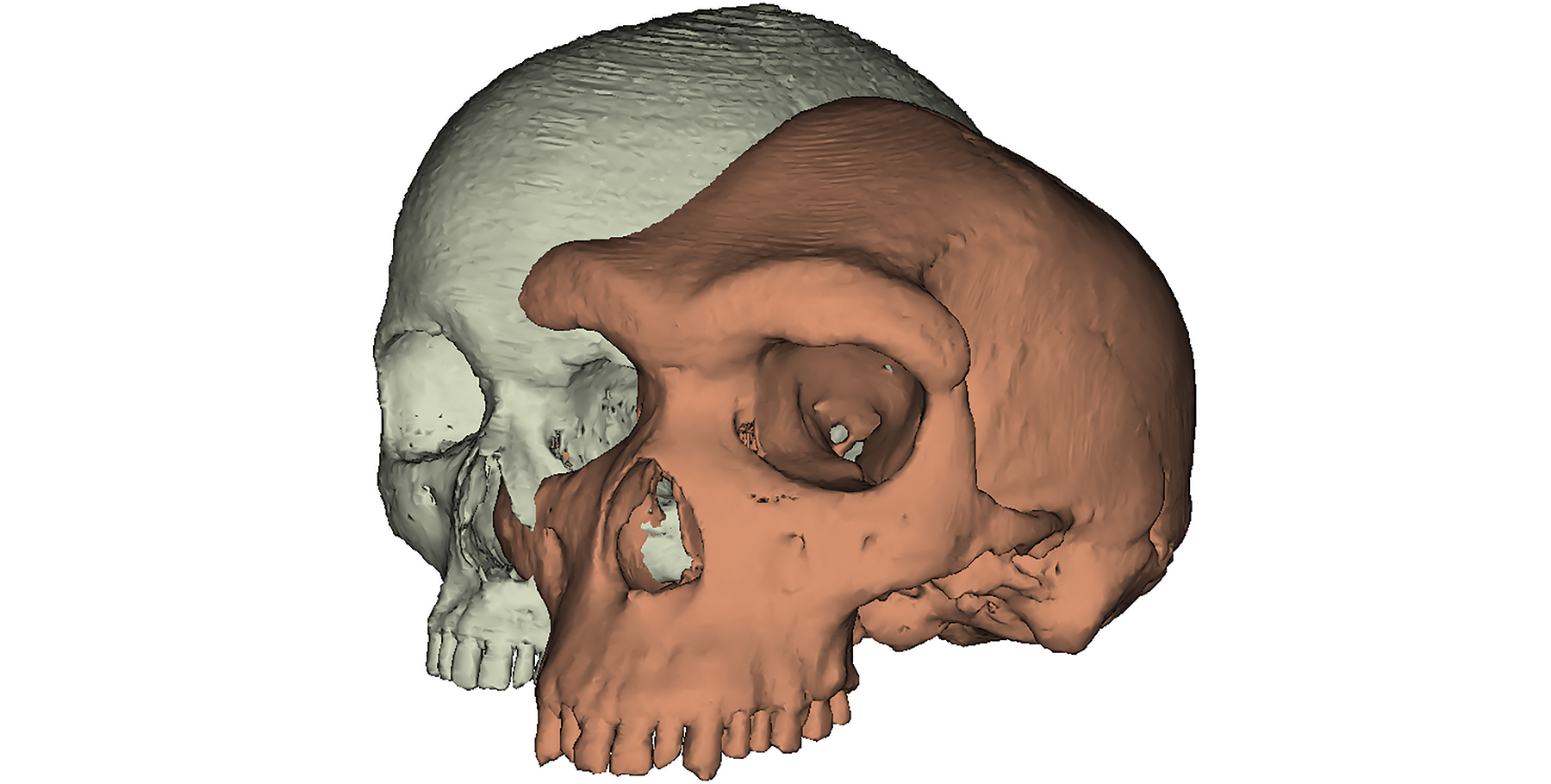 HOW NOW GONE BROW?: Researchers used computer models of an ancient hominin skull (right) to study the evolution of the brow ridge, a feature that is far less prominent in modern human skull structure (left).
PAUL O’HIGGINS, UNIVERSITY OF YORK

In 1921, a Swiss miner named Tom Zwiglaar made an extraordinary find. While working in a lead and zinc mine in what is now Zambia, he stumbled across a remarkably preserved skull. The specimen, now known as Kabwe 1 or the Broken Hill Skull, was sent to paleontologist Arthur Smith Woodward at London’s Natural History Museum. He determined the skull belonged to an extinct hominin species he dubbed Homo rhodesiensis. Contemporary scientists generally consider the skull, still kept at the Natural History Museum, to be from H. heidelbergensis and have dated it to between 300,000 and 125,000 years old.

For Ricardo Godinho, an evolutionary anthropologist at the...

Researchers have been debating hypotheses explaining the evolution of different brow-ridge sizes almost as far back as the discovery of that first H. heidelbergensis skull. “We’ve had these ideas about why early hominids had such a large brow ridge for a long time,” says Melissa Tallman, a paleoanthropologist at Grand Valley State University in Michigan who was not part of Godinho’s project. These have ranged from suggestions that the ridge was an elaborate signaling appendage to the argument that it acted as a sun visor. In the 1970s, anthropologist Grover Krantz wore a fake brow ridge every day for six months to try to discover its utility, says Chris Stringer, a physical anthropologist at London’s Natural History Museum. From the startled looks Krantz received from passersby, he concluded the brow ridge may have functioned to intimidate foes, says Stringer.

Currently, there are two leading brow-ridge hypotheses in the paleontological community. One, the spatial hypothesis, suggests that the brow ridge shrank as the brain case grew: unlike, say, chimpanzees’ eyes, which are set in front of their brain case and protected by a pronounced brow ridge, humans’ eyes shelter under the broad forehead that accommodates the frontal lobes. The second, the mechanical hypothesis, argues that big brow ridges protected ancient hominins’ faces by distributing stress from their strong biting and chewing muscles—less necessary in modern humans because we prepare our food.

Godinho and his colleagues tested each of these hypotheses with a computed tomography (CT) scan of Kabwe 1 provided by the Natural History Museum. The researchers created 3-D computer models with the CT scan: one of the original skull and two with reduced brow-ridge sizes. The approach is becoming widely popular in paleontology. “This kind of in-depth modeling . . . is the future of our field,” says Tallman.

To make the two reduced-brow models, Godinho’s team virtually shaved off the brow ridge, and tested whether doing so invaded the eye sockets. Not only was this not the case, but “we concluded that there is more bone than is actually needed for the brow ridge according only to the spatial hypothesis,” he says. They next tested the mechanical hypothesis by modeling how the three different brow-ridge sizes affected the skull’s biting ability at different levels of strain. “We [didn’t] find marked differences between the three different crania,” says Godinho. “That tells us that there are slight differences,” but these are not significant enough to support the mechanical hypothesis (Nat Ecol Evol, 2:956–61, 2018).

With the main competing hypotheses more or less ruled out, the team turned to nonhuman primates for additional clues. Old World monkeys such as Mandrillus leucophaeus and M. sphinx have prominent facial swellings that aren’t related to spatial or mechanical processes. They use these features for social displays and signaling. Perhaps early hominins’ brow ridges had a similar function—as might modern humans’ foreheads, along with our expressive eyebrows, Godinho says. “You see that throughout the hominid fossil record, the face is becoming smaller,” he says. “As it’s becoming smaller, it’s also retracting under the braincase. When that happens . . . the forehead becomes more vertical and less sloped backwards. That means that inevitably the muscle that moves the eyebrows has a different orientation.” As a result, modern humans’ eyebrows are more visible and able to convey subtle, nonverbal messages, he explains.

In their paper, Godinho and his colleagues propose that our communicative foreheads may have arisen as human brains grew bigger across evolutionary history, or as part of some other unrelated and still-unknown adaptive process. One hypothesis is that human populations, by self-selecting for more-social and cooperative individuals, indirectly influenced the evolution of physical features involved in communication, such as eyebrows. Whatever the driver, it “allowed the eyebrows to become more prominent and more relevant in nonverbal communication,” he says.

That idea “is very interesting, but I think we have to be cautious,” says Ashley Hammond, a paleoanthropologist at the American Museum of Natural History who was not involved in the work. “It’s sort of inherently untestable.” Modern humans may not necessarily have evolved from a hominin that had a pronounced brow ridge, she adds. Tallman agrees, saying that while the study “pretty convincingly” shows there isn’t support for the spatial or mechanical hypotheses, in terms of why the brow has gotten smaller, “I don’t think their data actually addresses that [social] question.”

Godinho, who completed his PhD last year, stresses that his team isn’t suggesting that nonverbal communication via the eyebrows triggered the change in brow-ridge shape. “We suggest that [the change] is a byproduct that has become an advantage,” he says, “and which, to a certain degree . . . may have become more relevant as modern humans arose.”