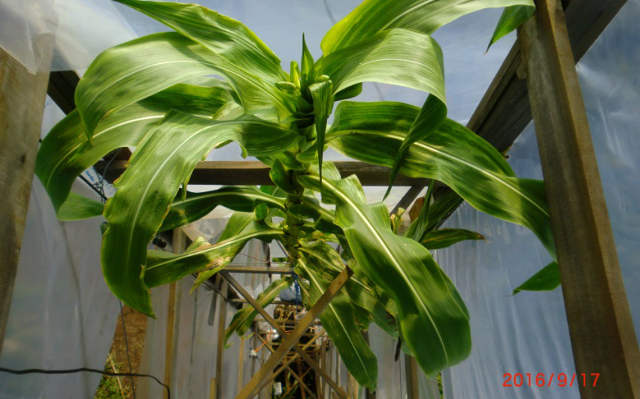 ALL EARS: Jason Karl grows giant maize in specially constructed greenhouses in Costa Rica. COURTESY OF JASON KARLJason Karl has been growing corn since he was a teenager. Starting in 1996, he began planting the crop on his family’s farm in Olean, New York, and soon grew curious about how tall he could make it grow. So he started experimenting.

“Seeing how tall corn can grow comes down to internode length and quantity,” Karl explains—in other words, the number of leaves a stalk has and the distance between those leaves. He learned early on that growing seedlings in a greenhouse greatly increases internode length, in part because the glass or plastic shifts the light spectrum reaching the plant’s leaves. He also learned that certain strains of corn were “night-length reactive,” meaning that the plant increases its number of internodes when grown in a light regimen of long days...

Karl carried on his corn-growing experiments at home while he was in college at Cornell University, a couple of hours’ drive to the east. And at school, he had access to the university’s library, which contained volumes upon volumes of scientific research on maize genetics. “Once I got into the literature, I could see there were mutations” that affected a corn plant’s height, recalls Karl.

Karl found plenty of information on mutations that increased internode number. In the 1970s, for example, researchers had discovered a naturally occurring dominant mutation known as Leafy that adds extra leaves (and thus extra internodes). He also learned of indeterminate and delayed flowering, both recessive mutations that affect the same flowering pathway in a way that boosts the number of internodes. Karl figured he could use traditional breeding techniques to integrate these mutations into Chiapas 234.

I’ve never seen anybody grow a 45-foot-tall corn plant; it’s impressive. And he put together a cool set of genes in order to pull it off.
—Edward Buckler,
Cor­nell University

“It’s never been done before,” he says. “No one would try it because it makes corn tall—too tall, people are not interested in super-tall corn. However, it’s interesting for basic research. The questions I always had”—such as how the short night–driven increases in internode number interact with the greenhouse-triggered increases in internode length, and how both of these interact with height-linked mutations—“the literature didn’t answer them.”

Over the years, Karl got his corn to grow taller and taller. At his family’s farm, he grew the Chiapas 234 variety up to 35 feet tall, and that was just by manipulating environmental variables such as night length. That plant earned him the world record for tallest corn plant in 2011. Then, to push the plant taller yet, he bred a Chiapas corn plant with a mutant plant carrying the Leafy mutation and then back-bred that hybrid to the Chiapas for six generations to essentially place the Leafy mutation in the Chiapas genetic background.

But before he grew his new corn variety, there was one last environmental variable to consider: the growing season. Karl could only grow for about seven months in New York before the costs of heating the greenhouse became prohibitive. So last year, on his own dime, Karl moved from Olean to the central valley of Costa Rica. “In New York, you have to keep corn from freezing, whereas down here you can focus on trying to grow it out to completion to see what’s happening,” he says. Late last year, his efforts paid off. In a makeshift greenhouse setup designed to both encourage the plant’s growth and support its stem as it climbed toward the sun, he grew a corn plant that measured 45 feet tall with more than 80 internodes—56 more internodes than unmodified Chiapas corn grown under normal conditions. (He regularly publishes his data in the Maize Newsletter.)

“What I think is so amazing about this tall plant is it really highlights how quickly a corn plant can turn the sun into carbon, into an incredibly tall plant,” says Edward Buckler, a US Department of Agriculture (USDA) quantitative geneticist at Cornell University who in 2014 helped create a comprehensive map of maize height genetics (Genetics, doi:10.1534/genetics.113.159152). “I’ve never seen anybody grow a 45-foot-tall corn plant; it’s impressive. And he put together a cool set of genes in order to pull it off. My hat is off to him.”

Although farmers may not be interested in growing super-tall corn plants, which are unable to support themselves, Karl’s work could have implications for increasing the height of other crops, says Sarah Hake, a USDA researcher at the University of California, Berkeley. “Most breeders would rather have their corn shorter so it doesn’t fall over. But if this could be sugar cane or Miscanthus for biofuel or feeding to animals as a wet grass . . . beyond the science of it, which is interesting, there [are potential applications].”

Karl, though, plans to stick with corn. In addition to refining the growing conditions, he hopes to add some of the other mutations he’s identified that might boost plant height. “Then having those stacked together, it should get up a bit higher,” says Karl, who already has a 55-foot-tall plastic greenhouse constructed for his next big plant.

Correction (April 6): This story has been updated from its original version to add that both Edward Buckler and Sarah Hake are researchers with the US Department of Agriculture. The Scientist regrets the oversight.