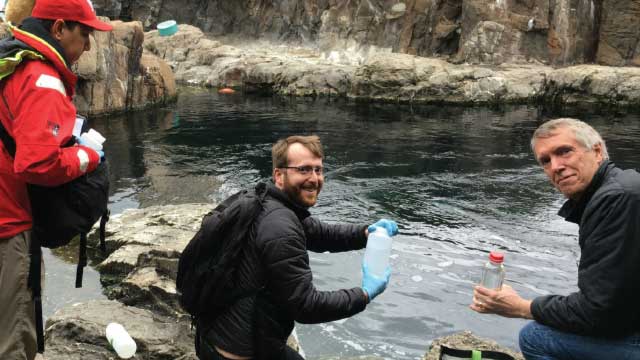 When investigating the different forms of marine life inhabiting New York City’s various bodies of water, Mark Stoeckle, a biologist at Rockefeller University, says “a bucket, like what you would use when you’re painting your house,” along with a rope and a few empty bottles will do the trick. Using these simple tools, he and his team collected water samples from the lower Hudson and East Rivers to obtain traces of DNA that had been sloughed off by various fish species.

“We threw the bucket in the water, hauled it up, [and] poured the samples into some rinsed-out juice bottles,” says Stoeckle. They then took those water-filled containers back to the lab and analyzed the DNA....

Bits of free-floating DNA shed by fish and other living organisms are known as environmental DNA, or eDNA. When researchers analyze eDNA and compare it against a reference library of known genetic sequences, it can paint a comprehensive picture of what organisms presently inhabit a given environment. “Most people only see fish when you reel them up on your fishing line,” says Stoeckle, a self-described lifelong naturalist. “This is another way of learning about them.”

Stoeckle recently published the data he collected from the lower Hudson Estuary and East River in the journal PLOS ONE (12: e0175186, 2017). This study was the first to characterize marine fish migration using eDNA. In order to capture the passage of migratory fish, Stoeckle and his team—consisting of one postdoc and one high school student—gathered one-liter water samples from the same locations once a week for six months. Additionally, he and his team sequenced DNA from 18 species of fish, enhancing the library of reference sequences. The goal was to identify as many species as possible from their water samples, and compare their data to known fish migration patterns.

The researchers amplified a specific region of a ribosomal RNA gene in mitochondria—a useful molecular signature that is distinct in each species—in order to identify which species the floating bits of eDNA belonged to. Beginning in early April, they detected a dramatic increase in eDNA for many of the fish sampled, including Atlantic menhaden (Brevoortia tyrannus), tautog (Tautoga onitis), and cunner (Tautogolabrus adspersus), among others. “This method is new, and you have to have some way to benchmark your results,” says Stoeckle. Indeed, their findings, demonstrating a large multispecies migration into New York City waterways beginning in the spring, were corroborated by prior work.

Most people only see fish when you reel them up on your fishing line. This is another way of learning about them.—Mark Stoeckle, Rockefeller University

Stoeckle also unearthed some surprises: for example, the strong springtime increase in the population of Atlantic  menhaden, a major food source for larger species such as humpback whales. The menhaden’s presence could explain recent whale sightings in the East and Hudson rivers. Oyster toadfish (Opsanus tau) were also unexpectedly common in the Hudson and especially in the East River.

This no-frills, noninvasive method of ecological assessment can potentially improve protocols for aquatic biologists from a variety of disciplines, especially those who rely on traditional collection techniques such as boats, nets, and electrofishers—equipment that delivers an electric current to stun fish, enabling capture. Compared with such methods, eDNA is “less expensive and less damaging to the environment,” says Stoeckle.

Elizabeth Alter, an evolutionary genomicist at the City University of New York, agrees. She notes that methods such as electrofishing can be disruptive to habitats and may not be able to capture the teeming diversity of ocean life, in particular. And nets meant for larger animals might not capture smaller ones, and vice versa.

In Alter’s own work comparing eDNA with traditional methods, she notes rocky habitats tend to give off strong DNA signals, but are weak spots for electrofishing, because animals can find numerous hiding places. In such environments, eDNA can capture hidden organisms. “[It] can often uncover things that are cryptic or very rare,” she says.

“The hope is that this method will not replace [traditional methods] completely, but will be able to do much more accurate, dense sampling than we do now,” says Stoeckle.

But if the use of eDNA for characterizing aquatic ecological dynamics is to become more widespread, researchers first have to determine if the technique can answer the type of questions that they’re asking. Prior to Stoeckle’s study, it wasn’t clear whether scientists could actually track migrating fish in marine environments. In theory, it would only work if eDNA is present when the fish are present and gone when they are absent. Jesse Ausubel, director of the Program for the Human Environment at Rockefeller University, says their project was successful because of the goldilocks effect: eDNA sticks around for just the right amount of time. “The really neat thing is that it seems to last a day or two, which is just right for the kind of questions that we’re trying to answer,” he says.

Alter is further validating eDNA to see if it can also characterize the abundance, not just the presence or absence, of species. Specifically, she’s investigating how dams in the Bronx River affect the density of eel species, in collaboration with researchers at Queens College and the Wildlife Conservation Society.

Other researchers in the Northeast are catching on. Jennifer Miksis-Olds, a biological oceanographer at the University of New Hampshire, learned about eDNA from Stoeckle just this year, and is interested in pairing it with acoustic methods to both detect the presence of organisms and to identify them. “With multiple frequencies and sophisticated acoustic systems, you can get at much more information, like shape and composition of the animals, but you still don’t know what species they are,” she says. eDNA would provide an additional layer of information. Miksis-Olds says she’ll bring back water samples from an upcoming cruise to the Outer Continental Shelf for Stoeckle to analyze for eDNA.

Thomas Noji, Chief of the Ecosystems and Aquaculture Division at the National Oceanic and Atmospheric Administration’s Northeast Fisheries Science Center, is also excited about the potential of eDNA. As head of the lab that investigates ways to improve commercial aquaculture, Noji is interested in using eDNA to study how different caging methods for farmed oysters affect surrounding biodiversity. “It’s very cool—we can get a quick overview of what fish are there,” Noji says.

Encouraged by the falling costs of DNA sequencing, the rise of eDNA research has also been facilitated by an ever-expanding portfolio of reference genomes. Ausubel helped organize the Census of Marine Life, a 10-year endeavor aimed at taking genetic stock of Earth’s marine life. This herculean task resulted in a much-improved reference library containing the genetic sequences for different species of fish and other aquatic organisms, according to Ausubel. “Scientists had known for some time that there is this loose DNA, the eDNA, floating around in water, but it wasn’t really much good to sift it out because you had nothing to compare it to,” he says.

Despite these recent advances, using eDNA as an ecological tool is still a relatively new strategy. “There aren’t really standards for a lot of the protocols,” Alter says.  Standardization is important, to prevent cross-contaminating the samples and to allow for data comparisons between groups. “We’re all developing the methods as we answer the questions, which is always a bit of a challenge.”

Stoeckle is optimistic. “Ten years from now, my guess is this will be the main way that we analyze fish populations in the ocean,” he says.

Currently, he is collecting eDNA from the Lower New York Harbor off Coney Island in order to assess the presence of dolphins, whales, and sharks. Stoeckle calls it the subway project; he gets on the southbound Q train and rides the 26 stops to his destination. “I’ve had some interesting conversations,” says Stoeckle, admitting that he’s been questioned by curious passersby—and one local policeman—during his sample-collecting expeditions around the city. But that hasn’t stopped him from collecting samples from Central Park, or Coney Island’s New York Aquarium. “It’s a new technique; we’re at the beginning of learning what it can do,” he says. “I think it’s going to give us a much better appreciation of nature . . . even in an urban environment such as New York City.”