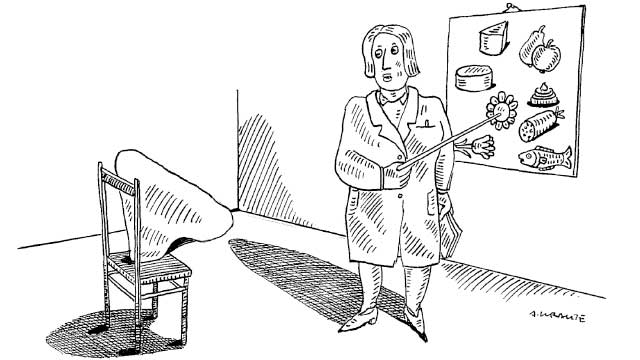 As a postdoc in the late 1970s, Charles Wysocki visited a lab in New York City, where he helped put together olfactory test kits to be used in determining the genetics of smelling certain odors. One of the compounds in the battery was androstenone, a pig pheromone that for about half the human population evokes either woody muskiness or stale urine. The other half—Wysocki included—can’t smell it at all. “Little did I know I’d be getting it all over my clothing,” he says, which probably made for a few wrinkled noses on the subway ride home.

His stint putting together the kits lasted just a week, and Wysocki didn’t have the need to test androstenone again until 1980, when he launched his own research group at the Monell Chemical Senses Center in Philadelphia (he’s now an emeritus member of the faculty). He was testing various strains of...

At the time, “nobody would believe my story,” Wysocki says, so he embarked on years of experimentation that demonstrated that repeated exposure to the compound can unlock people’s ability to perceive the scent. In a study of 20 volunteers who initially couldn’t detect the odor, half became sensitive after sniffing the compound three times a day for six weeks (PNAS, 86:7976-78, 1989). The results suggested that the inability to smell the substance was not necessarily an immutable trait. But it would be another decade before clinicians would seize upon the olfactory system’s plasticity to cure cases of anosmia—total olfactory loss.

For much of history, treating anosmia has been an exercise in futility. Every week for years, Thomas Hummel saw patients at the Smell and Taste Clinic of the Technische Universität Dresden in Germany and sent them home miserable. Some had lost their sense of smell from a head trauma, others following a viral infection. “There’s very little that can be done to help them,” he says. “That inspired us to find new ways to treat these patients.”

Hummel was aware of Wysocki’s work and of studies by a German physiologist who had experimented with essential oils decades earlier. So about 10 years ago, he decided to try out an exposure regimen on some patients. He asked 40 anosmic volunteers to sniff four essential oils—rose, eucalyptus, citronella, and clove—twice a day for 12 weeks. Thirty percent of the patients who completed therapy could smell better (The Laryngoscope, 119:496-99, 2009). “That was the first study,” says Hummel. “Now, it’s been replicated over and over.”

A meta-analysis of olfactory training studies published this year by Justin Turner, a Vanderbilt University otolaryngologist, and colleagues found that the therapy works for some anosmics (Int Forum Allergy Rhinol, 6:299-307, 2016). And he’s witnessed its success among his own patients as well. “Since there’s really nothing else out there that’s effective, I really see no downside to doing it,” Turner says.

For Christine Kelly, an American expat living in England, smell training restored a perceptual experience she had lost completely after a viral infection four years ear­lier. Her anosmia led to depression, and during this low point Kelly met a clinician who introduced her to smell training with essential oils. On her train ride home from that initial visit, Kelly decided that if she were to do this, she would observe herself along the way. “In that respect I became a student of anosmia, rather than a victim,” she says.

She kept careful track of her training—noting how well she could pick up a scent, distinguish it from others, and smell it the same way she had before the infection (a common problem among those who suffer from a loss of the sense of smell is parosmia—scent distortion).

After a few months of training, odors began to come into focus for Kelly. At first, they were terrible. “Everything had an unearthly, disgusting smell that would vacillate between burning Teflon frying pans [and] spoiling ham sandwiches that had been left inside a camper van in the rain for three months,” she recalls. Then, with continued training, Kelly was able to get a fix on lemon. More and more smells followed.

It’s not entirely clear how olfactory training works on a neurological level. Part of it, says Hummel, is mere attention: focusing on one’s olfactory impressions makes a person better at recognizing them. “Cognitive processing is improved,” he says.

The olfactory system is also known for its regenerative abilities; the subventricular zone of the mammalian brain is one of the few regions that births new neurons into adulthood, sending the cells to the olfactory bulb. And the peripheral nerve cells in the nose renew every few weeks. Wysocki says this turnover might be the reason why androstenone anosmics can come to smell the compound—there’s some positive feedback, perhaps by a few neurons that present the receptor for androstenone, that triggers the production of more cells bearing the receptor. “What might be going on is that what you’re seeing is some selective pressures existing in the olfactory system that are taking place over the course of months, rather than over the course of eons,” he says.

While the mechanisms for smell recovery remain mysterious, Veronika Schöpf, a neuroimager at the University of Graz in Austria, has observed some of the brain’s changes after olfactory training. She and her colleagues recently subjected 10 anosmics to fMRI before and after a 12-week training session. The participants had far fewer functional connections between odor-processing areas of the brain before the exercise (Neuroimage: Clinical, 9:401-10, 2015).

Interestingly, the neural networks that were activated in healthy controls by smelling odors were also activated among anosmics before and after olfactory training. “We were able to visualize in the first instance [that] these areas of the brain are still intact,” says Schöpf. The way she describes it, these networks are ready and waiting to process olfactory information in anosmics—and smell training gives the neurons the input they’ve been waiting for.

Kelly’s success with olfactory training has made her an evangelist for the therapy; she gives talks and offers guidance to anyone who asks. But her renewed sense of smell is not the same as before. “I truly have developed my own, new lexicon of smells,” she says. She continues to suffer from parosmia; coffee, for instance, is an entirely different scent to her than it was before. And the loss of those old scents took with it the deep emotional upwelling that often accompanies odors—something smell training has not been able to recover. “It is an indescribable bereavement,” Kelly says. “A unique bereavement all anosmics have, I think.”