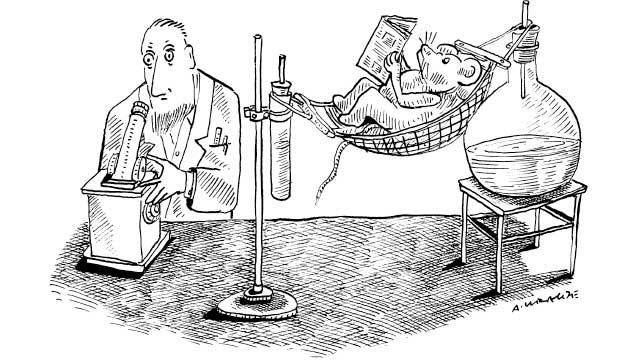 This challenge to fellow biomedical researchers, issued in the pages of the journal Lab Animal in April of this year (doi:10.1038/laban.1224), was accompanied by a proposal that was no less bold: solve science’s reproducibility crisis and problems with translating laboratory biology to humans by overhauling how animal research is conceived of and conducted. The five authors of the review argued that part of that overhaul should be a greater focus on research animals’ needs.

For many, the relationship between animals’ well-being and the validity of research results may not seem immediately obvious, but to Lahvis, a clear pattern emerges from decades of experimentation in disparate fields. “I think biomedical researchers are making a big mistake. . . . The mistake is that we keep studying rodents and primates in cages to understand human beings that are not in cages,” he says. Using caged animals as models of some aspect of human experience is, he says, “just a step I can no longer take. I don’t think that’s valid.”

Kathleen Pritchett-Corning, a lab animal veterinarian at Harvard University and one of the authors of the Lab Animal review, reached a similar conclusion. “Animals shouldn’t be furry test tubes; they should be practice patients. . . because a lot of this research goes on to be translated into humans,” she says. “The more you can respect the biology, the behavior, and what a mouse needs, the better you’re going to find your results in terms of getting honest answers about the translatability of your work to the human platform.” For example, she says, mice are stressed by puffs of air in today’s individually ventilated cages; commonly used corncob bedding contains phytoestrogens that have been shown to adversely affect mouse health; and transparent cage walls are another source of stress. “The animals, I think, would prefer opaque caging, where these apex predators walking around every day taking care of them can’t see them,” she says.

Even a practice that would seem to protect animals—avoiding any exposure to pathogens—may render results less translatable to people and uncaged animals, who exist in a soup of germs. Lahvis cites a finding that wild mice have a type of T cell found in humans, but not in laboratory mice (Nature, 532:512-26, 2016). “There’s probably no human being on earth that’s immunologically naive, or very few of them,” he says.

Pritchett-Corning says that funding is virtually nonexistent for studies on how housing conditions affect results; many published findings have been accidental outcomes of experiments gone awry. There are exceptions, however. In the 1980s, researchers at the University of Illinois Urbana-Champaign compared the brains of mice reared in a “complex” environment, with toys and daily access to a larger space, to those kept in smaller, toyless cages either by themselves or with another mouse. The differences in the mice given toys included more synapses and mitochondria per neuron, and more capillary volume. More recently, separate studies have shown dramatic effects of social isolation on the ability of mice and rats to survive breast cancer.

When it comes to remedies, though, Lahvis and the review authors part ways. Lahvis acknowledges that studying animals in the wild or in large, naturalistic enclosures would not be an easy change to implement. “There are probably obstacles to the vision that I see now, but there are a lot of brilliant scientists out there that can figure this out,” he says. His own lab has studied the social lives of squirrels in captivity and in the wild, and found similar results in each. “I’m not saying biomedical research is wrong,” Lahvis says. “I’m saying, we’ve got to pay a hell of a lot of attention to this, and really move in this direction, because . . . at the level of biological systems, we don’t know when we’re right or when we’re wrong.”

Review coauthor, Brianna Gaskill, an applied ethologist at Purdue University, counters that even if those changes could be implemented, they would bring problems of their own. “On one hand, maybe behaviorally it might be ideal, but on the other hand you’re probably going to have a lot more health issues,” she says. As for much larger enclosures, “it’s probably not something that, at least, we’re going to see on a wide-scale basis, especially for mice, just because of the sheer volume of animals that we use and the volume of space you would need in order to accommodate that new housing.”

In lieu of such a radical shift, small adjustments to lab animals’ environment, such as cages that offer places to hide, or provision of sufficient bedding, could make a big difference, suggests Pritchett-Corning. (See “Mouse Traps,” The Scientist, November 2014.) Even these tweaks face the obstacles of rewriting current protocols, potentially wasting money sunk into existing infrastructure, and navigating the limited offerings of laboratory cage manufacturers. But, she says, they have a greater chance of being implemented than Lahvis’s suggested overhaul.

The review authors also argue that to make their results more robust, animal researchers may need to take a page from those who conduct studies on humans that allow a bit more variability into their experiments, not less. “Variability is not really our enemy,” says Gaskill.

For Lahvis, though, adjustments to the current cages would not be enough. “A standard cage is about 280,000 times smaller than [a mouse’s] natural home range. For a rhesus macaque it’s 7 million times smaller,” he says. Increasing the size of the cage by a bit and adding toys or furniture for the animals is “not enrichment; it’s just less harsh impoverishment,” he says.

Correction (October 2): Brianna Gaskill is an applied ethologist, not an applied pathologist as stated in the original version of this article. The Scientist regrets the error.