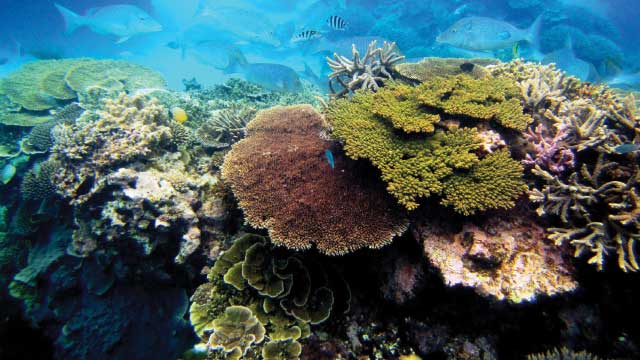 READY TO FREEZE: Many stony corals such as Acropora, pictured here at Lady Elliot Island on Australia’s Great Barrier Reef, are vulnerable to the effects of climate change. So researchers are working to cryogenically preserve them for later.REBECCA SPINDLER/TARONGA ZOO

Mary Hagedorn is the first to admit she has a somewhat unusual research calendar. “My whole schedule is based on the moon cycle,” she says. “I’m like a modern druid.”  But there’s a scientific explanation: Hagedorn works with corals—animals that famously synchronize mass spawning events to nights just after a full moon.

For Hagedorn, a research scientist at the Smithsonian Institution and head of the international Reef Recovery Initiative, such coral spawnings, which occur just once a year for some species, mark the only opportunities to collect the animals’ eggs and sperm—key ingredients for one of the latest approaches to coral conservation. As coral communities around...

“We’re seeing more and more global changes, [and] the protections we’re able to do are not enough,” explains Hollie Putnam, an integrative biologist at the University of Rhode Island who studies how corals and other marine invertebrates respond to environmental stress brought about by a changing climate.

One approach that Hagedorn’s team is exploring is to cryogenically freeze the coral egg and sperm cells to serve as seeds for future species reintroductions to marine environments. “Cryopreservation is an amazing tool for helping wildlife populations,” Hagedorn says. “It can reverse extinction and maintain genetic diversity.” The method has already been used by other researchers to preserve, and later thaw for artificial insemination, the sperm cells of critically endangered mammals such as the North American black-footed ferret (Anim Conserv, 19:102-11, 2016).

Think of it as a human fertility clinic, except for coral.

A few years ago, Hagedorn and her colleagues embarked on a proof-of-concept project using an important genus of reef-building coral called Acropora. Starting in 2012, she and other members of the Reef Recovery Initiative spent a few years assembling samples of two species—A. millepora and A. tenuis—from populations at Australia’s Great Barrier Reef. Professional collectors “go out and collect for about a week, and bring whole colonies back to the station a day before the full moon,” she says. “We help them offload it and get it into tanks.”

The researchers then waited for the newly collected animals to release their gametes, parceled up in tiny, buoyant egg-sperm bundles. “You could imagine it as a cluster of grapes,” Hagedorn says. “You have several eggs packaged together tightly in this membrane, with a packet of sperm inside. Each little coral polyp produces that.” These bundles rose to the surface and separated into eggs and sperm that the researchers then filtered for storage.

To cryopreserve the sperm, the researchers froze the cells using liquid nitrogen—cooling them down to
-196 °C. The cells “just go into stasis, or suspended animation,” Hagedorn says. Then, in a series of experiments in 2013 and 2014, the team thawed these cells and combined them in glass vials with fresh eggs to trigger fertilization. “Think of it as a human fertility clinic, except for coral.”

The researchers found that although cryopreservation reduced the fertilization success of sperm—the frozen-then-thawed gametes were generally less motile than fresh sperm—they could produce viable larvae. Once transferred to larger tanks, these larvae successfully settled and began laying down a calcareous skeleton, just as those produced from fresh sperm did (Sci Rep, 7:14432, 2017). Although the team has yet to evaluate how well the larvae would do in a real marine environment—permits to introduce animals to coral reefs are hard to come by, Hagedorn explains—the project marks a first step in making cryopreservation of corals practical. 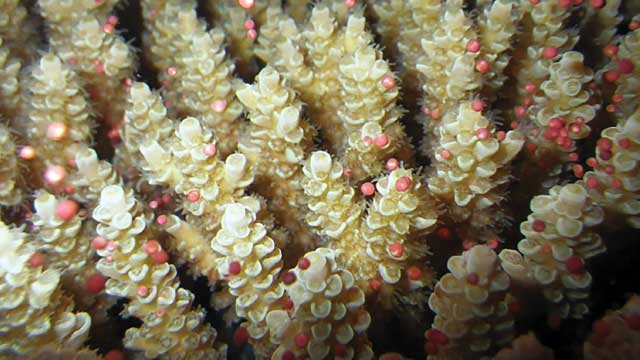 BUNDLES OF JOY: Acropora corals release their gametes in the form of egg-sperm bundles during mass spawning events.ANDREW HEYWARD/AUSTRALIAN INSTITUTE OF MARINE SCIENCE

For now, the team’s method falls short of a full restoration, notes Chris Langdon, a coral biologist at the University of Miami. “Preserving the sperm is only half the equation,” he says. “A bunch of sperm is not going to do us any good if there aren’t any eggs to fertilize.” Egg preservation is more challenging, and Hagedorn tells The Scientist that for some coral communities, such as the ones she works with in Hawaii, the spawning events aren’t always large enough to produce enough cells to work with; her group is now investigating alternatives that include preserving larvae and other parts of coral tissue.

“I think that’s the right course of action,” says Ken Nedimyer, president of the Coral Restoration Foundation, a Florida-based nonprofit that creates offshore nurseries for threatened coral species and has agreed to provide coral samples to Hagedorn’s team. He adds that there are many other elements of corals, such as their algal symbionts and microbiomes, that would need to be preserved as well. “You can’t just have a sperm and an egg, make a larva, and think you’re going to restore coral reefs—it’s not going to happen.”

But Langdon notes that there’s a bigger limitation to consider when it comes to Hagedorn’s approach to coral restoration: there’s no reason to believe that corals dying from oceanic conditions now would be able to survive any better in the likely warmer and more acidic oceans of the future. “That’s my criticism of the current-day coral restoration efforts,” he says. “It just doesn’t make sense to me.”

He is not alone in these concerns, and several research groups are investigating other—though not necessarily mutually exclusive—methods to preserve coral populations in a changing climate. Putnam, for example, aims to pin down the factors that make some corals particularly resilient to climate change and other, more specific environmental stressors. “If we made a comprehensive effort to identify [resilient individuals], and then interbred those to create new strains, and have the gametes from those, then we could reseed the environment with climate change–resistant strains,” suggests Langdon, who is working on this approach.

Such selective breeding is just one of several tactics included in a conservation strategy known as assisted evolution. Other interventions to aid coral survival could include genetic reprogramming and microbiome manipulation. But first, Putnam says, researchers need a better grip on several aspects of coral biology: much remains unknown about the interactions of individual polyps with their algal symbionts, and the role of the coral microbiome. Then, “we can apply that understanding to these approaches,” she says. “I think that’s where we’re headed right now.”

In the meantime, Hagedorn and Nedimyer point out, frozen coral material, which could potentially last decades or even hundreds of years in storage, may help preserve genetic diversity that might otherwise be lost. “I don’t want to get to the point where our only corals are frozen,” says Nedimyer. “But I think somebody will look at it one day and say, ‘I’m glad you guys did that when you did.’ I think it’s looking into the future, and trying not to lose something really valuable.”