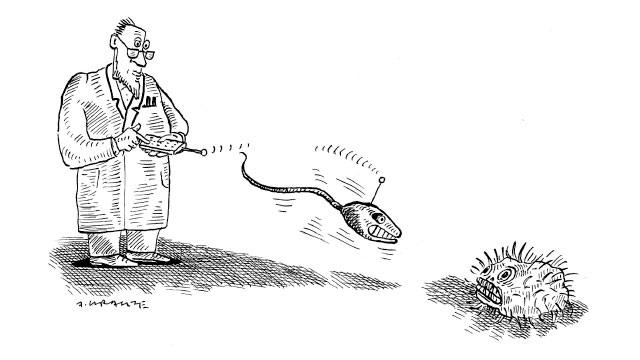 A sperm’s job is simple: Swim to an egg, and inject genetic material. The structure of a mammalian sperm cell reflects those basic functions, consisting primarily of a DNA-containing head and a rapidly beating tail. Recently, scientists at the Leibniz Institute for Solid State and Materials Research (IFW) Dresden in Germany decided to exploit this structure, plus these cells’ natural inclination to travel through the female reproductive tract, for an unusual project. “We [thought], why not use these sperm cells as drug carriers?” says Mariana Medina-Sánchez, group leader of micro- and nanobiomedical engineering at IFW Dresden. The idea is less outlandish than it may sound. After all, “in the community [of researchers working on] micromotors or microswimmers, there were others using stem cells or bacteria to carry drugs.”

Over the past decade, scientists and engineers have made significant steps toward realizing the vision of micro- and nanoscale...

We thought, why not use these sperm cells as drug carriers?—Mariana Medina-Sánchez, IFW Dresden

Around five years ago, the researchers at IFW introduced their own system using sperm cells (Adv Mater, 25:6581-88, 2013). In the paper, the team proposed that sperm, paired with tiny, motorized harnesses that would give researchers control over where the cells swam, could be useful for a number of therapeutic applications, including assisted fertilization. A few years later, one of the study’s coauthors, Oliver Schmidt, along with additional collaborators at IFW, successfully used the system—remotely controlled with magnetic fields—to lead immotile sperm to oocytes in an artificial fluidic channel that mimicked some of the physiological conditions in the female reproductive tract (Nano Lett, 16:555-61, 2016). “The idea was to counter one of the male infertility problems, which is low sperm count,” says Medina-Sánchez. “It was to help these few sperm cells to reach the oocyte by coupling them with a magnetic harness.”

This work set the stage for a second set of experiments, in which Medina-Sánchez and her colleagues decided to test their artificially motorized sperm cells as drug delivery systems for cervical cancer and other gynecological diseases—a job for which sperm are naturally equipped. In addition to being excellent swimmers, Medina-Sánchez says, the cells have a limited lifetime and don’t proliferate and form colonies like bacteria. They also have the ability to fuse with somatic cells, which, she adds, is a big plus “because the sperm can fuse with cancer cells and deliver the drug inside them.”

First, the team tested the sperm’s ability to fight cancer cells by loading bovine sperm heads with doxorubicin hydrochloride, a chemotherapy drug, and placing them in a dish with cervical cancer cells cultured into spheroids that served as 3-D tumor models. The drug-loaded sperm, they found, were efficient killers: after 72 hours of treatment, they had destroyed almost 90 percent of the tumor cells (ACS Nano, 12:327-37, 2018).

Then, to test whether drug-loaded bovine sperm could be steered toward a target, the team coupled single cells with tetrapod microstructures—iron-coated casings with tubular bodies and four arms, capable of being steered by a magnetic field. “The sperm can swim into the tetrapod and propel it forward,” says Haifeng Xu, a PhD student at IFW. “By coating a magnetic layer on the tetrapod, we can guide the micromotor to the target.”

Medina-Sánchez, Xu, and their colleagues tested the ability of the bionic sperm to swim through microfluidic channels to a cancer spheroid. Although the tetrapods slowed the sperm’s swimming speed by around 43 percent, the researchers were able to successfully guide the hybrids toward the cancer cells using rotating magnets located approximately 10 centimeters away from the sample. When the micromotors reached the spheroid, a mechanical trigger released the sperm from the tetrapods, allowing them to fuse with the cancer cells and deliver the drug—and after approximately eight hours, those cells had shrunk by around 40 percent.

“I was excited to see the work—I think it’s a really nice next step, but we still have a lot more to do,” Bradley Nelson, a professor of micro- and nanorobotics at ETH Zürich in Switzerland who didn’t take part in this work, tells The Scientist. “Right now, you have to be able to know where the tumor cell is so you can steer the thing there. . . . Ultimately, you’d like it to be autonomous.”

But while sperm have adapted to swim in the female reproductive tract, they may not necessarily be the optimal delivery vehicle to reach tumors, says Sylvain Martel, a nanorobotics researcher at Polytechnique Montréal in Canada. Unlike sperm, some bacteria possess the ability to sense low oxygen levels or fluctuations in pH, two properties found in actively dividing clusters of cancer cells. Martel and his colleagues previously reported a method using magneto-aerotactic bacteria—which, in their natural environment, swim along magnetic field lines toward areas with low-oxygen concentrations—to transport drug-loaded liposomes to tumors in mice (Nat Nanotechnol, 11:941-47, 2016).

Another important future consideration in using sperm as delivery vehicles will be how to avoid accidentally fertilizing an egg in the process of treating a patient, particularly because, according to Medina-Sánchez, sperm from humans would be better suited than those of other species to treat cancers in people. “We have thought about [this issue],” she says. “We believe that these treatments can be done, for example, when the woman is not ovulating.”

There’s still a long way to go before these sperm-driven hybrid micromotors will be tested in humans—to date, the system has only been investigated in vitro. Still, “this is a very good example of where hybrids are going,” Martel says. “Right now, I’m not sure that the future for treating cancers in the reproductive tract will be this system, but I think it’s an important step.”