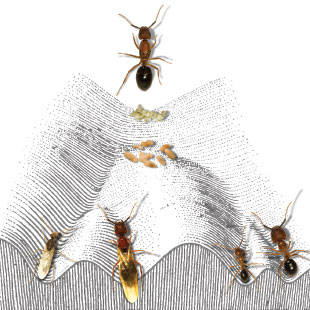 ANTS AND UNCLES: Members of carpenter ant (Camponotus floridanus) colonies come in a variety of shapes and sizes that fit into different castes, including the queen (top), major workers (bottom right), minor workers (next to major workers), and reproductive male and female swarmers (bottom left)COURTESY OF CHAOYANG YE AND JEURGEN LIEBIGThe cold room in biochemist Danny Reinberg’s lab at the New York University Langone School of Medicine is anything but. Illuminated for 12 hours a day and kept at 25 °C, the room is downright balmy. But entomophobes would be well advised to steer clear: this room is filled not with test tubes and petri dishes, but with ants. Lots and lots of ants.

Housed in hundreds of transparent shoebox-size plastic containers, the ants are part of an ongoing effort to establish a new model system for studying behavioral epigenetics, or what Reinberg, who is also...

The idea of establishing an ant colony as a model system for epigenetics dates back nearly 12 years to a conversation Reinberg had with Shelley Berger, an epigeneticist at the University of Pennsylvania. Berger had recently returned from a family vacation in Costa Rica, where she spent time watching leaf-cutter ants in action. Ant colonies are highly homogeneous, genetically speaking. Yet their members vary dramatically in shape, size, and behavior. “In some cases the worker and queen are absolutely identical genetically, and yet they have completely different functions,” Berger explains. “The workers give up their reproduction to the queen.” Such phenotypic differences, Berger and Reinberg realized, must come down to epigenetics—variations in gene expression caused by transcription factors, differences in histone modification, noncoding RNA abundance, DNA methylation, and so on.

They recruited ant expert Juergen Liebig of Arizona State University, and the trio settled on a pair of species to study: the carpenter ant Camponotus floridanus and Harpegnathos saltator, aka Jerdon’s jumping ant.

According to Berger, each species offers unique attributes. The carpenter ant has several genetically identical “castes,” including a queen and two worker classes with different body morphologies and behaviors: petite foragers and brawny soldiers. The jumping ant has only one worker caste, but unlike workers of most ant species, they retain the ability to become fertile. If the queen dies or is removed from the colony, some of the workers will fight until a winner emerges, at which point she transforms into a queen—a feature that also makes classical genetics studies feasible, as it allows colonies to be manipulated and propagated.

They’re still these big soldier-like ants, but now they’re foraging. We’ve changed their brains, sort of the way Dr. Frankenstein changed the behavior of the monster.—Shelley Berger
University of Pennsylvania

Another benefit of using carpenter and jumping ants as models: a marked difference in life span between castes. A carpenter ant queen may live 10 or 20 years, Berger says, while a forager lasts 6 months. Jumping ant queens live about three times as long as workers, she notes, but “when you do that neat switcheroo trick and make the worker reproductive, the longevity increases”—a difference that is also due to epigenetics.

With $12 million in HHMI funding over eight years, the team has produced seven publications, including papers detailing the genomes and methylomes of both species and some of the epigenetic differences that make their transformations tick. Most recently, the team showed that epigenetic manipulation of carpenter ants (using histone deacetylase inhibitors and RNA interference) could turn soldiers into foragers (Science, 351:aac6633, 2016). Berger’s team calls these creatures “Frankenstein ants,” she says, as they blend the behavior of one caste with the morphology of the other: “They’re still these big soldier-like ants, but now they’re foraging. We’ve changed their brains, sort of the way Dr. Frankenstein changed the behavior of the monster.”

Intriguingly, she says, her lab has found a window early in development when the soldiers are susceptible to such manipulation, after which their predetermined behavioral pattern is locked in. This critical period, Berger adds, is reminiscent of early brain plasticity in humans, and her lab is now working to understand it.

The team initially kept its ants in Arizona, as Liebig already had a working ant facility. Eventually, though, they established colonies in Reinberg’s lab in Manhattan, and then in Philadelphia—a process that required a year or so of paperwork and red tape to ensure, among other things, that the animals (one of which is not indigenous to the U.S.) do not escape. Reinberg dedicates multiple technicians to the project, charging them with such tasks as feeding and monitoring the ants, cleaning the room, and performing injections for CRISPR/Cas9-based genetic modification.

But nothing is easy when it comes to developing a new model system, Berger notes—especially attracting new converts. The researchers most likely to extend the work are lab alumni, who then take the models to their own newly formed labs. Every trainee, she says, is a “precious emissary.”

Roberto Bonasio, Reinberg’s former postdoc and now a molecular biologist at the University of Pennsylvania, is one such emissary. As a postdoc, Bonasio led the team’s genome and methylome sequencing studies. Now, he plans to study the epigenetic markers of ant behavior. What, Bonasio asks, makes a worker a worker and a queen a queen? “What we think is that there are two softwares in their brains, and one is running and one is paused.” In the jumping ant model, he suggests, loss of the queen (and her pheromones) and successful combat with other workers somehow cause those programs to flip, raising a lowly worker to entomological royalty.

Now, Bonasio and his colleagues await the development they hope will elevate ants from curiosity to model organism: genetic malleability. Reinberg says his lab has already developed the tools to propagate and manipulate jumping ants for proper genetic studies, and he hopes to submit a paper to that effect by year’s end.

“Those would be the first ant mutants ever made,” Bonasio says. “It makes for a movie title: Ant Mutants in Manhattan!” Whether it’ll be a hit remains to be seen.