High altitude is a natural laboratory for investigating pregnancy complications, such as preeclampsia and gestational hypertension, that restrict a fetus’s oxygen supply.

ABOVE: La Paz, Bolivia, is the highest capital city in the world, providing researchers with a living laboratory to study human pregnancy at elevation.
COLLEEN GYDE JULIAN

To navigate the political, cultural, and language barriers that come with researching pregnancy in another country, Colleen Glyde Julian says she channels the properties of chewing gum. Julian, an integrative physiologist at the University of Colorado’s Anschutz Medical Campus, says that remaining flexible under grinding pressure is “the defining characteristic that somebody must have to do this kind of work”—wisdom she cultivated as a PhD student working under another Anschutz researcher, biomedical anthropologist Lorna Grindlay Moore. “You just have to take it all in stride.”

Working in Bolivia has meant, for example, balancing coolers of blood during hair-raising taxi rides through congested streets en route to the local hospital, crammed shoulder to shoulder with colleagues. And because luggage is often delayed in transit, the researchers sometimes have to get creative with equipment. One time while carrying out similar work in Tibet, Moore connected a boombox to her ultrasound machine to hear the blood passing through a pregnant woman’s uterine artery.

Julian and Moore study pregnancies at altitude, where lower air pressure means that each breath draws in less oxygen than at sea level. Because the success of a pregnancy is predicated in part on how much oxygen gets to the fetus, disruption of oxygen flow is associated with various pregnancy complications—including fetal growth restriction, preeclampsia, and gestational hypertension. Even though such conditions kill thousands of people and their fetuses each year, much about their underlying physiology remains unknown.

The best model for human pregnancy is humans.

Despite the inherent practical difficulties, the two women agree that studying pregnancy at elevation, where all fetuses develop under chronic hypoxia, can inform what goes wrong in pregnancies worldwide, while also revealing how local Indigenous populations have adapted to low oxygen over millennia.  “The only way to ethically manipulate maternal oxygenation is really altitude,” Moore tells The Scientist. “A lot of studies use experimental animal models . . . but the best model for human pregnancy is humans.” The pair’s findings, based primarily on studies of Andean women in Bolivia, have uncovered potential treatments for conditions linked to hypoxia. 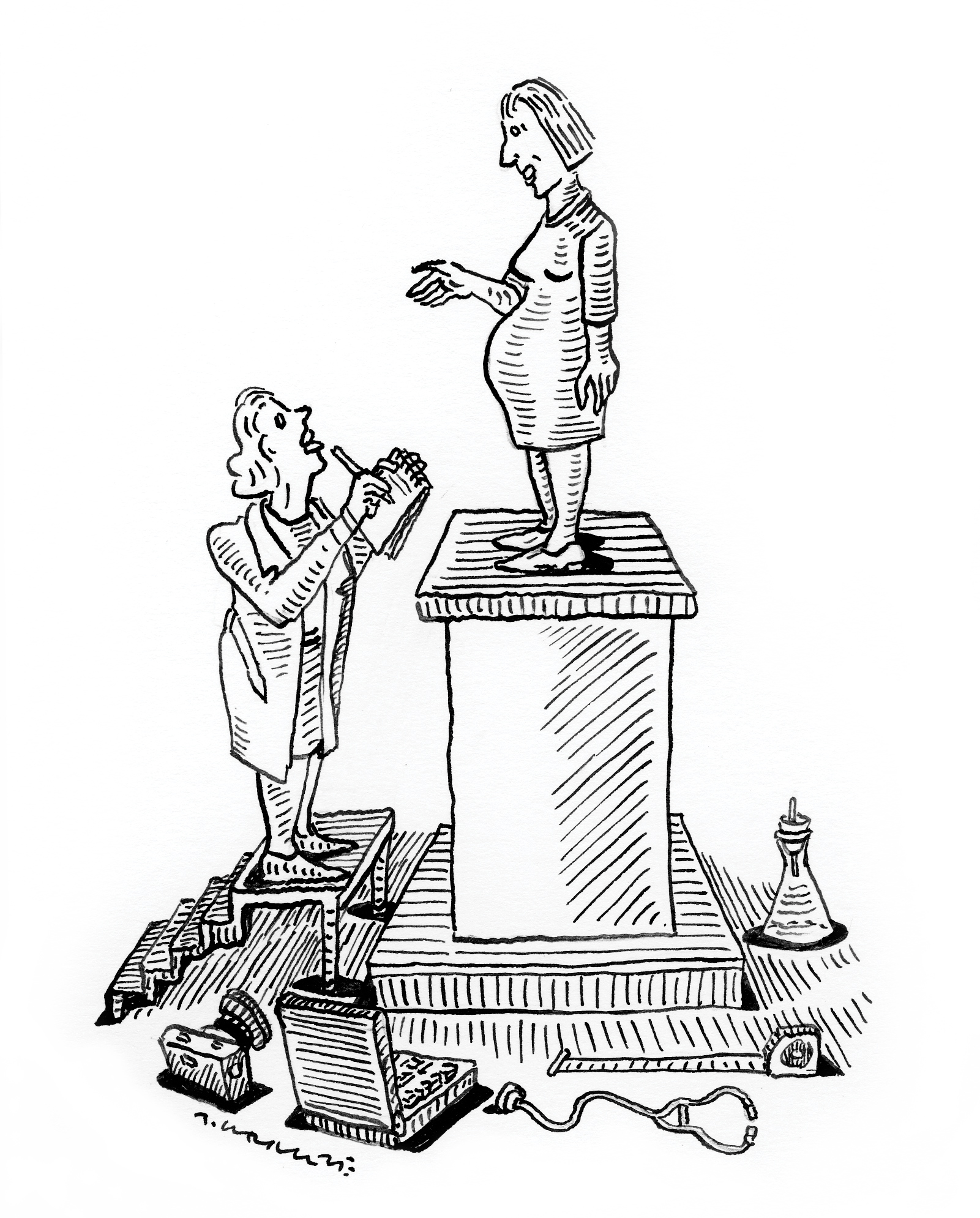 The thread of that work began in the late 2000s, when Moore and Julian traveled to South America, working alongside colleagues at the Bolivian Institute of High Altitude Biology to compare pregnancies between Andean women and those of European descent living in the region. At low elevations, the two populations were similar, but above 12,000 feet, Andean infants were born larger and heavier than European babies. Uterine artery blood flow, and therefore oxygen delivery, was also twofold higher in Andean women.

Comparing gene expression patterns between the two populations revealed a clue about why: two genes in Andeans contained mutations that were positively associated with birth weight at high altitude, and one of the mutations—in a gene called PRKAA1—was also linked to increased uterine artery blood flow. “The interesting thing is that it’s associated . . . only at high altitude, not at low,” Julian tells The Scientist. “That suggests a gene-by-environment interaction that provides some specific benefit at high altitude.”

PRKAA1, the researchers learned, is part of the AMP-activated protein kinase (AMPK) signaling pathway, a regulator of metabolism, cell growth, and vascular function that switches on under hypoxic stress. AMPK activation also regulates vasodilation, and variations in PRKAA1 may bolster uterine artery blood flow at altitude, thereby reducing the effects of hypoxia. Back in aptly named Summit County, Colorado, where the average elevation is above 10,000 feet, the team is now probing the pathway using animal models and pieces of human myometrial arteries collected during C-sections at local hospitals. Julian sometimes sleeps in her car as people undergo their surgeries so that she can drive a cooler of samples—belted into the passenger seat—back to the lab.

Julian and Moore’s colleagues have designed special chambers, essentially barrels fitted with vacuum pumps, that can simulate altitudes of up to 20,000 feet, or two-thirds the height of Everest. When pregnant mice were exposed to hypoxia inside, the animals gave birth to smaller young than control mice, but pups born to mothers treated with an AMPK-activating drug during pregnancy were closer in size to the controls, if not entirely protected from hypoxia’s shrinking effects. Exposing isolated arteries taken from the pregnant mice to an AMPK-activating drug in vitro showed that the drug keeps vessels more dilated, evidence that the pathway does help preserve oxygen flow to a fetus at elevation. The team found similar effects in arteries taken from pregnant women at altitude. Notably, the vessels from women who gave birth to growth-restricted babies dilated less than those taken from women with normal pregnancies, a finding the team is still investigating. 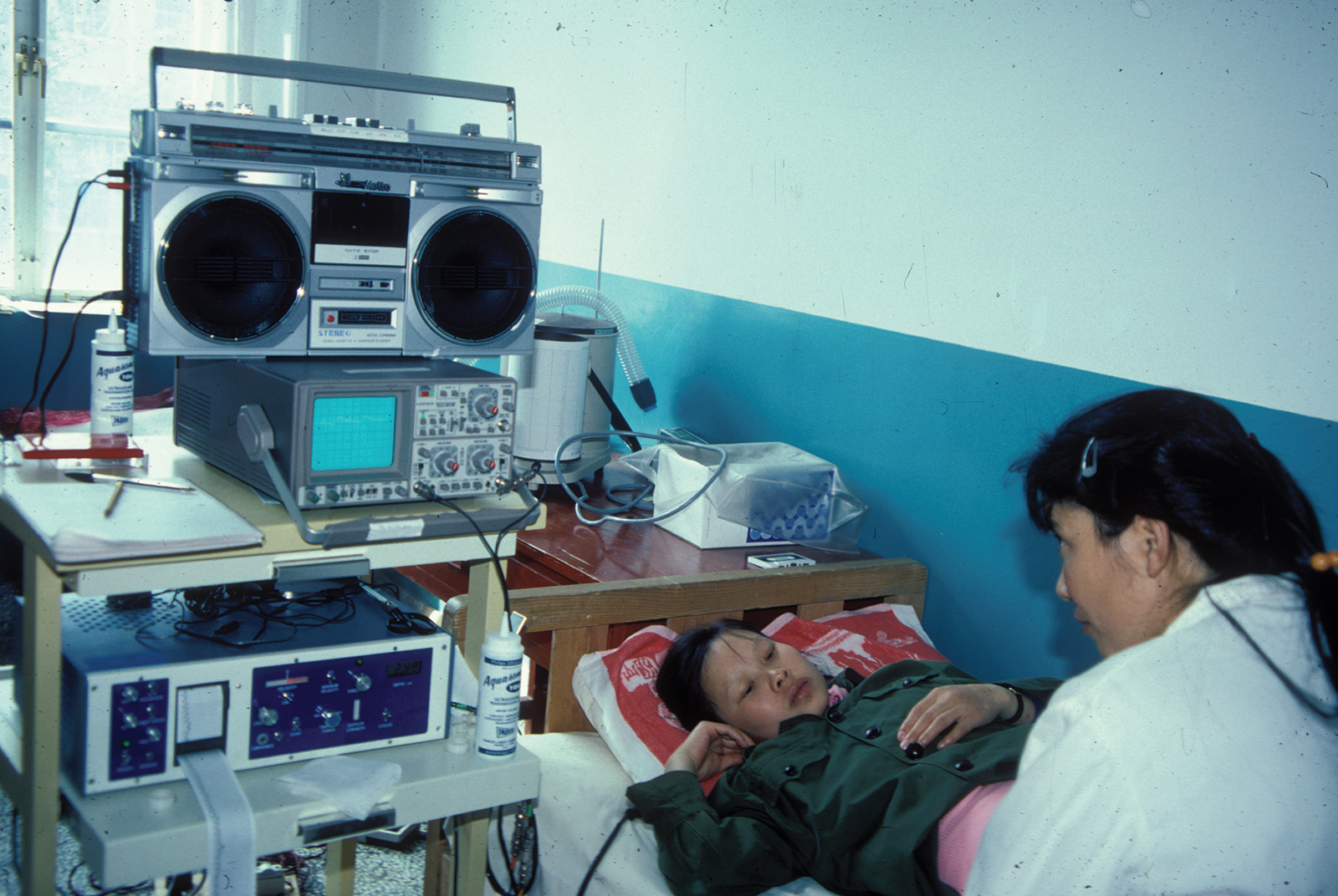 SOUND INTERRUPTED: A Tibetan physician named Droma—most Tibetans do not use family names—used a boombox to listen to an ultrasound after the machine’s recorder broke.
LORNA MOORE

The goal of all this work is to identify therapies for complications such as preeclampsia. Several AMPK-activating drugs exist, and some, such as the diabetes medication metformin, are approved for human use. Researchers in South Africa recently completed a Phase 1/2 trial testing whether metformin could help extend the pregnancies of people with preeclampsia. Currently, delivering the baby is the only treatment. While the results aren’t yet published, Catherine Cluver, a maternal-fetal medicine specialist at Stellenbosch University who led the research, says in an email that the trial “went very well,” and Julian is now planning a similar trial in Bolivia.

Julian, Moore, and their colleagues are also investigating links between hypoxia in utero and disease in adults. Under hypoxic conditions, oxygen gets diverted away from a fetus’s peripheral circulation to protect the brain. As a consequence, scientists have found, those babies sometimes develop cardiovascular diseases in adulthood. “Virtually every adult-onset disease has a relationship to development in utero,” notes Moore.

Dino Giussani, a developmental cardiovascular physiologist at the University of Cambridge who was born in Bolivia, studies this phenomenon, called fetal reprogramming, using large altitude chambers. Giussani found that in sheep, which have similar gestational milestones to humans, exposing pregnant ewes to hypoxia resulted in growth-restricted lambs that developed high blood pressure more frequently in adulthood.

Rather than targeting AMPK, Giussani treated ewes with an antioxidant called MitoQ that reduces oxidative stress by scavenging free radicals. “We’re finding that you can rescue some of the fetal growth restriction and some of the later cardiovascular disease by giving antioxidants following the start of hypoxia,” he tells The Scientist, adding that he is now delaying the therapy until a time equivalent to when clinicians might detect a hypoxic pregnancy in humans. “The next step would be to apply this to obstetric practice.”

The promise of real-world solutions for the millions of mothers living at altitude, who are still most at risk of developing hypoxia-related complications whatever their ancestry, has been central to the relationships between the researchers in Bolivia and Colorado.

“Our collaborative research projects have already yielded important scientific findings related to improving the identification of at-risk pregnancies,” Lilian Toledo-Jaldin, an obstetrician at the Hospital Materno-Infantil in Bolivia, tells The Scientist in an email (translated from Spanish with Google Translate). Moore and Julian recently trained Bolivian physicians on how to standardize their metrics for diagnosing preeclampsia, and Toledo-Jaldin is helping to analyze medical records to see whether diagnoses have changed since. “It’s really important for the work that people are doing internationally to benefit the community that they are working with,” Julian says. “I’m really proud of our Bolivian team, and it’s nice to see the long-lasting effects of what we’re all doing.”