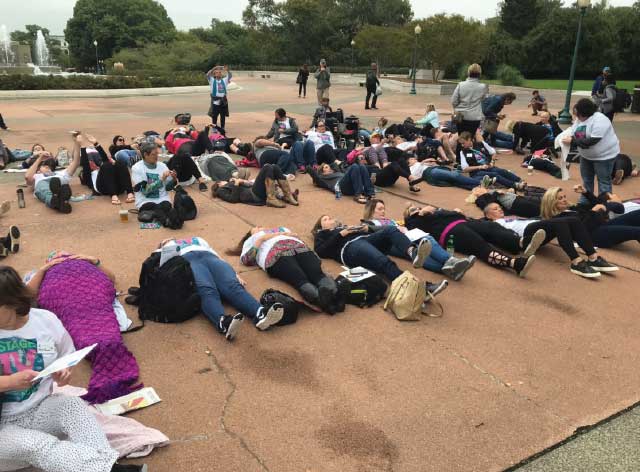 LYING DOWN FOR A CAUSE: Cancer patients and research advocates, among them Lisa Quinn, stage a “Die In” at the Stage IV Stampede in Washington, D.C., on October 13, 2017.PATRICK QUINN

Last October, after a hectic couple of days campaigning for metastatic breast cancer awareness and research funding in Washington, D.C., Lisa Quinn boarded an RV owned by the advocacy group METAvivor for a road trip up the East Coast. The stay-at-home mom from northwest Arkansas was diagnosed with stage IV breast cancer in July 2015 at age 36, and in 2016, she had donated saliva and blood samples, along with her clinical data and information about her disease, to the Metastatic Breast Cancer Project (MBCproject).

Launched by the Broad Institute of MIT and Harvard University in October 2015, the MBCproject aimed to collect patient-donated samples from which to extract molecular and genomic information on metastatic breast cancer,...

“It was very exciting to meet the researchers that started all of this, that are doing everything they can to help us to live longer,” says Quinn.

Quinn had learned about the project through Facebook. From the beginning, MBCproject organizers knew that Facebook would be a major driver of recruitment. “In the era of social media, the Internet, online groups, organized patient and organized advocacy groups, we thought there would be an opportunity to engage patients directly,” says project director Nikhil Wagle, a medical oncologist at Harvard Medical School and Dana-Farber Cancer Institute and a Broad researcher.

The ultimate goal, he says, is to collate as much data as possible and make it publicly accessible to accelerate research into the disease, which has a median life expectancy of just three years following diagnosis, and to speed the development of treatments. Progress, Wagle adds, depends largely on scientists’ ability to capture participants and samples that had previously slipped through the cracks.

“The numbers of samples with clinical annotation that were being used for research seemed much smaller than what should be possible,” he says. Only a small fraction of cancer patients are treated at large academic centers that also conduct research, Wagle says—the vast majority goes to community hospitals, where their samples and records sit on a shelf. “No one has ever asked those patients if they’d be willing to contribute their samples and information.”

To Wagle’s and his colleagues’ delight, the MBCproject collected data from more than 2,000 women and men from across the U.S. in its first seven months. Now that number has doubled, with more than 2,400 of those patients consenting to share their records and tumor samples and more than 1,500 providing saliva samples. The participants come from more than 1,000 different institutions, mostly small community hospitals and treatment centers, Wagle notes. “This is a study that would be completely inefficient, or actually impossible to do, to get them to sign on to a multicenter collaboration,” he says. “Because we’re going directly to patients, it doesn’t matter.”

Last October, the project released a preliminary data set, comprising de-identified information from 78 patients. The data include whole exome sequences from 103 tumor samples as well as detailed pathology, diagnostic, and treatment history reports from medical records and patient-reported information on treatment responses and experiences. “Those two types of data—the clinical data and the genomic data from samples—independent databases exist of each of those,” Wagle says, “but to my knowledge, there isn’t a large database that has both of those pieces of information from the same patients.”

The MBCproject team is continuing to work through the thousands of samples it has collected and plans to release a new set of data every six months. “Our hope is that six months from now we’re going to double the size of the database, and within the next couple of years, more than 500 patients will be in the database with full genomic, clinical, and pathologic data,” Wagle says.

The commitment of people with metastatic breast cancer to contribute their own health data to enhance progress in research and discovery for all who experience this condition is laudable. —Joe Selby,
Patient-Centered Outcomes Research Institute

“The commitment of people with metastatic breast cancer to contribute their own health data to enhance progress in research [and] discovery for all who experience this condition is laudable,” Joe Selby, executive director of Patient-Centered Outcomes Research Institute, which aims to partner patients with research projects, writes to The Scientist in an email. “We are thrilled to see others supporting initiatives that will improve patient-centered outcomes research.”

“It’s really exciting for us to see things like the MBCproject happening,” agrees epidemiologist Carolyn Hutter, acting director for the division of genome sciences at the National Human Genome Research Institute (NHGRI) and former NHGRI team lead for The Cancer Genome Atlas. “The movement toward participant-centered research and participant involvement in the projects . . . has been gaining momentum in recent years . . . not just in cancer, but broadly in biomedical research,” she adds. “[It’s] a recognition of the information and the value that they bring into a project.”

Wagle notes that patients’ roles in the MBCproject go beyond donating their samples and medical history. Right from the beginning, he says, patients and advocates have helped design and implement the whole thing, from building the project’s website to deciding on the names of data categories in the recent release. “It’s a real partnership and a project that’s truly co-owned by all the patients who participate.”

With the MBCproject demonstrating the practicality of this sort of patient-driven data generation, the Broad Institute is now applying the strategy to other cancers: the Angiosarcoma Project launched in March 2017, and the Metastatic Prostate Cancer Project is set to launch soon. And, thanks to additional philanthropic funding following the MBCproject’s success, “we anticipate launching many more projects in more cancers hopefully in [2018],” Wagle says.

In the meantime, Wagle and his colleagues also plan to dive into the data they’ve just released. “If I put my researcher hat on, this data is incredibly exciting to answer important questions into the biology of breast cancer,” he says. For example, “Can we figure out features of the tumor that might predict response to certain therapies or resistance to other therapies? If we can do that, that helps us develop diagnostic tests to figure out which patients should get certain therapies.”

Now, says Quinn, it’s important to spread the word. “It’s a great resource that’s there, but now it’s got to be used,” she says. And not just by researchers, but by patients, too, she adds. “If there’s a place we can go and see what treatments people have done [and] had successes, that’s so important,” she says. “I think it’s very important that patients go in and look at that information. We have to be our own advocate.”