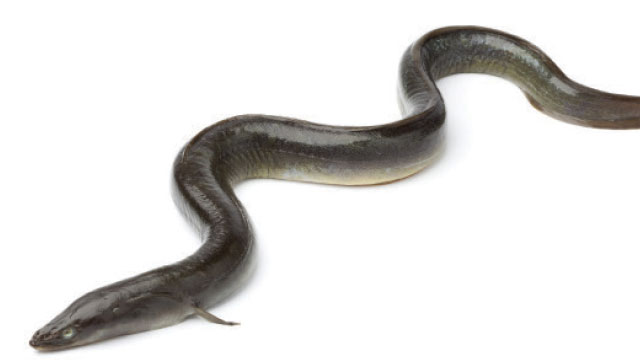 In the early 20th century, Danish biologist Johannes Schmidt solved a puzzle that had confounded European fisherman for generations. Freshwater eels—popular for centuries on menus across northern Europe—were abundant in rivers and creeks, but only as adults, never as babies. So where were they coming from?

In 1922, after nearly two decades of research, Schmidt published the answer: the Sargasso Sea, the center of a massive, swirling gyre in the North Atlantic Ocean. Now regarded as some of the world’s most impressive animal migrators, European eels (Anguilla anguilla) journey westward across the Atlantic to spawning sites in the Sargasso; their eggs hatch into larvae that are carried back across the ocean by the Gulf Stream, arriving two or three years later to...

“Since Johannes Schmidt identified this spawning area in the Sargasso Sea, people have been wondering about that great journey and trying to figure out how to follow the eels,” says Righton, whose work on epic marine migrations includes appropriately titled projects such as CODYSSEY and EELIAD. “But the technology hasn’t been available. . . . They just slip away into the darkness, really, in autumn, and no one knows what happens to them.”

This information gap is of particular concern to conservationists. European eel recruitment (the number of babies added to a population each year) is thought to have declined more than 90 percent in the last 45 years. In 2008, the International Union for Conservation of Nature classified the fish as “critically endangered,” citing a concerning lack of data on their life histories. “We have a black hole, or a ‘blue hole,’ out in the ocean in terms of adult migratory behavior,” says Kim Aarestrup, a senior researcher at the National Institute of Aquatic Resources, Denmark, and one of Righton’s collaborators. “It’s really hard to do population ecology and management if you have a hole in the life cycle.”

In the mid-2000s, with these concerns in mind, Righton, Aarestrup, and other European colleagues set out to fill in the blanks. Taking advantage of recent improvements in animal telemetry, they tagged more than 700 large (therefore female) European eels—no easy task, Aarestrup admits, since “they’re pretty slimy.” The team planned to track their slippery quarry across the Atlantic. As eels swim too deep—usually at least 200 meters down—to be tracked using GPS, tags logged environmental data to provide indirect clues about the eels’ whereabouts. When a tag’s battery died after several months, it detached and floated to the surface, where, depending on the type of tag, it either relayed data via satellite or drifted back to shore for collection.

As the data rolled in, the researchers realized there was more to European eel migration than previously thought. Just a fraction of tagged eels made it to the ocean: only 87 tags collected data beyond the coastline. Many of those 87 were soon separated from their eels by predation, and none made it beyond the Azores—a result that highlights the peril inherent to the transoceanic journey, Righton notes.

The partial trajectories recorded by the tagged eels that did make it to the ocean revealed further surprises. For starters, rather than take a direct route, eels apparently meandered their way to the Sargasso. “They’re taking a much longer route than ‘as the eel swims,’” says Righton, meaning that many models of eel migration are likely inaccurate. What’s more, the team found, eels don’t seem to swim with nearly enough urgency to reach the Sargasso in time for spawning early the following year.

Using eel larvae catch data from the spawning region, the researchers had estimated larval growth rates and extrapolated backwards in time to predict hatching times. From those estimates, they’d calculated that peak spawning must occur as early as February. But comparing this timeline with tag data revealed that eels leaving Europe in the autumn would have trouble reaching their destination fast enough at the pace they were going. “An eel has to go, for example, from Denmark at 55 kilometers a day to make it,” says Aarestrup. Tags instead showed maximum speeds of around 47 kilometers per day for the largest—and presumably strongest swimming—fish in the population.

The findings point to a different story from the one told until now, the researchers argue—at least some of these eels weren’t destined for the first spawning season at all, but the second (Sci Adv, 2:e1501694, 2016). “We can say that it’s highly unlikely that a significant number of the eels leaving Europe will actually make it down to the Sargasso Sea ready for the coming spawning,” explains Aarestrup. “Which then leads us to the conclusion that they’re probably part of the next spawning, which happens 12 months later.”

The claim is certainly a surprising one, says Michael Miller of Nihon University in Japan. “They propose the hypothesis that maybe there’s a mixed strategy—some go quickly and some go slowly,” he says. “It’s a completely new idea.” However, he emphasizes that without full data sets, there may be other explanations that can’t yet be ruled out. As Aarestrup and his coauthors acknowledge, larval growth rates might be underestimated using catch data, due in part to the biasing size-selectivity of fishing nets, meaning that peak spawning could actually occur later in the year. Alternatively, Miller adds, “eels that leave too late might just not succeed in spawning.”

Getting to the bottom of the mystery will probably require better tags that last longer and can be attached to a wider range of eels, not just the largest, notes Righton. “We’re waiting for a revolution in technology,” he says.

In the meantime, the study raises important questions about the ecology of these “amazing fish,” Miller notes. “The hypothesis is most interesting, because it could be true, or it could be not true,” he says. “Either way, they’ve proposed the hypothesis and it’s going to stimulate a lot of interesting research.”