Several years ago, University of California, Santa Barbara, marine ecologist Kevin Lafferty was confronted with dozens of dying black abalone (Haliotis cracherodii) in his open-water enclosures. He was trying to raise the critically endangered species to test whether any individuals were resistant to the Rickettsiales-like prokaryote (RLP; Candidatus Xenohaliotis californiensis) that had nearly wiped out the black abalone along the southern Pacific coast. With no local populations remaining, Lafferty wondered where the pathogen was coming from.

To solve the mystery, he collected water near the outflow pipe of a farm growing red abalone (H. rufescens)—a species that has been hit less hard by the disease—five miles up the coast from his enclosures, and found that the samples contained the bacterium’s DNA (Front Microbiol, 4:373, 2013). Somehow,...

The farm is still operational, and presumably still harboring RLP, Lafferty says, though he adds that he hasn’t checked the water again since 2013 to be sure. Instead, he’s moved on to other ways to use environmental DNA (eDNA) in ocean water to study marine species. An idea that was old hat for microbiologists, who have been isolating and sequencing DNA from environmental samples for years, the concept of studying eDNA—fragments of mitochondrial and nuclear genomes in the environment—has only in the last decade been applied to macroscopic organisms, which continually shed bits of their genomes into surrounding soil or water.

In 2012, geneticist Eske Willerslev and colleagues at the University of Copenhagen published the first application of eDNA in a marine ecosystem, reporting the discovery of mitochondrial DNA from more than a dozen different fish species and four bird species in water samples collected off Denmark’s northern coast (PLOS ONE, doi:10.1371/journal.pone.0041732). “It took several attempts,” recalls Willerslev’s former graduate student Philip Francis Thomsen, a molecular ecologist now at Aarhus University. “We had given up on it almost. . . . And then we started taking larger samples, up to 1.5 liters, and suddenly it started working.” 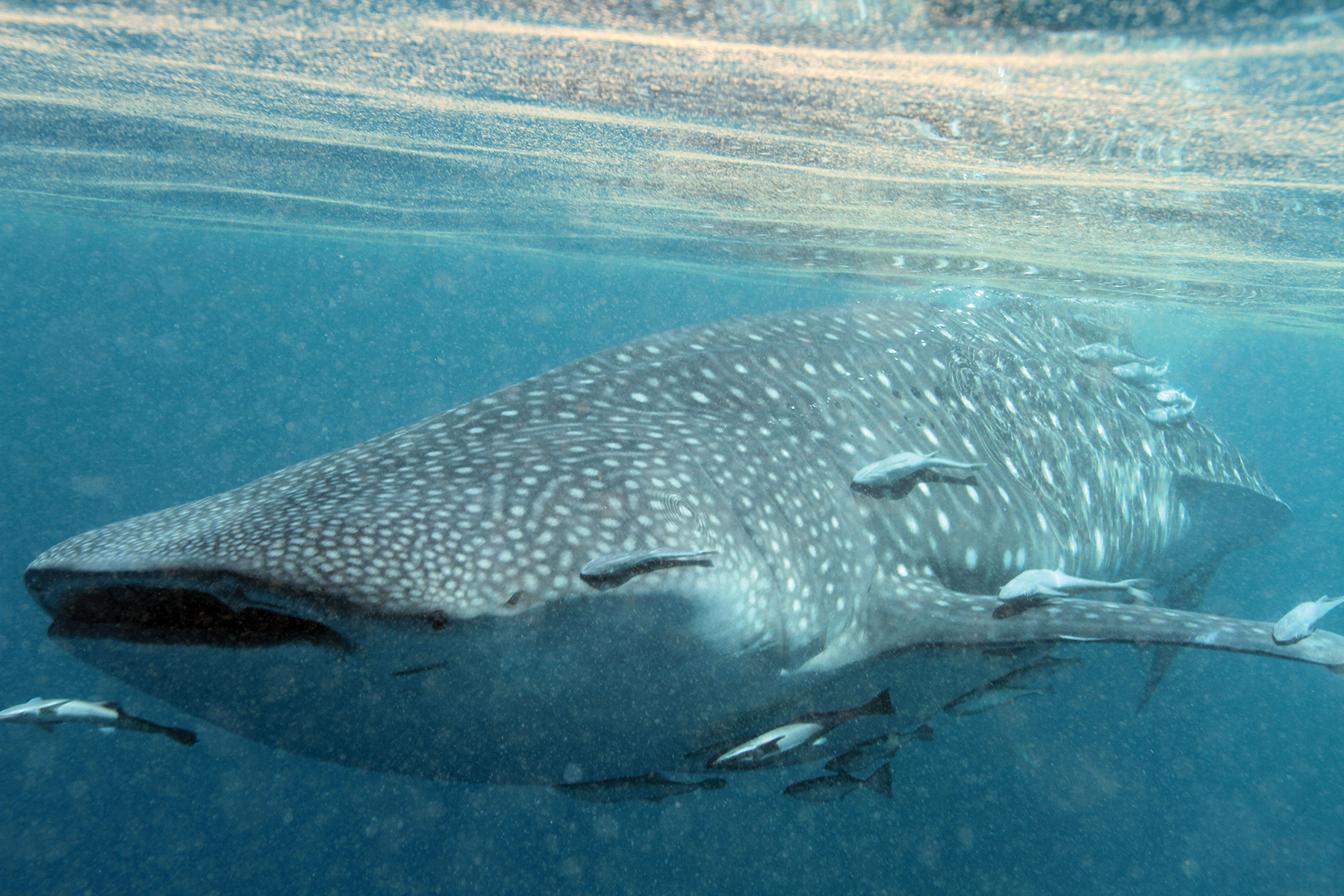 DNA IN THE WATER: Researchers use fragments of genetic material left behind by whale sharks and other marine animals to study the organisms’ population genetics at a distance.
Peter Rask Møller

Since then, Thomsen, Lafferty, and others have been taking advantage of developments in sequencing technology to use eDNA—usually mitochondrial because it’s present in greater quantities and includes well-characterized genes to aid species identification—to survey biodiversity and search for specific species in oceans around the world. Lafferty’s latest target, for example, is great white sharks (Carcharodon carcharias), which are difficult to sample directly because they can be hard to find. “The classic line is, ‘I didn’t see the shark until it bit me,’” he says.

Following a tip from white shark expert Chris Jerde of UCSB’s Marine Science Institute about the animals’ usual hangouts, Lafferty headed out on his stand-up paddleboard last October to collect seawater just offshore, five miles east of Santa Barbara. Additional collaborators then developed species-specific primers so the team could test for great white mitochondrial DNA in the samples. Sure enough, in water taken from where sharks are known to swim, the researchers got a positive result, whereas samples Lafferty had taken just a few miles up the coast were free of shark DNA (Front Mar Sci, doi:10.3389/fmars.2018.00355, 2018). “It’s not nearly the same as saying I saw a shark,” Lafferty admits. “On the other hand, you hardly ever see a shark, so it’s a good alternative to that.”

If Lafferty and his team can secure funding, “we could develop a heat map for the whole West Coast that would say where are the [great white] hotspots in time and space based purely on water samples”—a resource that could help reduce shark attacks and aid biologists, he says. It will have to be taken with a large grain of salt, however. “The spatial and temporal scale of the information is a little blurry,” Lafferty says. Coupling eDNA studies with models of ocean current speed and direction could improve predictions of where the DNA comes from, adds Thomsen.

With the study of eDNA continuing to expand, researchers are thinking beyond simple species detection. For example, Lafferty suggests that analyses of variation in the shark DNA he and his colleagues recover could identify individuals that have attacked swimmers, by comparing the sequences with DNA taken from a bite wound or wetsuit worn during an attack. Meanwhile, other researchers have begun to use eDNA to assess populations’ genetic structures.

The classic line is, “I didn’t see the shark until it bit me.”

In 2016, Thomsen, then at the University of Copenhagen, and colleagues sampled water in the Persian Gulf, home to seasonal aggregations of hundreds of whale sharks. Although the analyses couldn’t reveal exactly how many individual sharks contributed to the mitochondrial DNA fragments they detected, the researchers used differences in gene sequence to assess the population’s genetic diversity (Nat Ecol Evol, 1:4, 2016). “We could make an estimate of the population size, and we could also compare the genetic diversity to that found in whale sharks in other parts of the world,” says Eva Sigsgaard, a postdoc in Thomsen’s lab.

Earlier this year, Kim Parsons, a molecular geneticist at NOAA Fisheries in Seattle, conducted a similar eDNA survey of harbor porpoises in waters off southeast Alaska (R Soc Open Sci, doi:10.1098/rsos.180537, 2018). Because these cetaceans are small and fast, Parsons says, it’s difficult to biopsy them while they’re swimming. More often, researchers rely on tissue samples collected from bycatch or carcasses washed up on the beach. To survey a greater swath of the Alaskan population, Parsons and her colleagues analyzed mitochondrial DNA fragments isolated from water scooped up from so-called fluke prints, smooth circles of water that appear on the surface after the animals dive. Parsons is now collecting additional water samples “opportunistically” as colleagues encounter harbor porpoises on other research excursions, and she hopes to secure funding to collect more samples herself, “to get a genetic snapshot for harbor porpoise throughout the area in one season.”

The power of eDNA approaches to study marine populations will increase as researchers learn more about how to interpret the data, Thomsen says. For example, while researchers would like to estimate species diversity and abundance, it’s not yet clear how best to control for factors such as variability in rates of DNA shedding among different species or even among organisms of different ages. Young individuals that have faster metabolisms and higher growth rates might leave behind more DNA, says Thomsen. Researchers are also just starting to isolate and analyze nuclear DNA. “Working with mitochondrial DNA was an obvious starting point,” says Parsons, but nuclear DNA “would give us much more power to estimate genetic differences” between individuals in a population.

“There’s still a lot of validation to be done but . . . I’m curious to see how much mileage we can get out of this,” says Lafferty. “I didn’t think we’d find white shark DNA. I was pretty surprised . . . and that surprise has given me more optimism.”