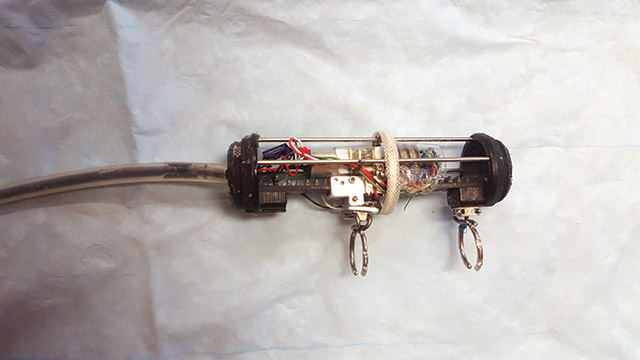 PAGING DR. ROBOT: The esophagus-stretching device is connected by a cable to a battery-powered, wifi-capable controller.KARL PRICEParents from all over the world bring their babies and young toddlers to Boston Children’s Hospital for an operation that surgeon Russell Jennings wishes he didn’t have to perform. These children have been born with a disconnected esophagus, the upper section of which ends in a blind pouch a few centimeters from a lower portion that protrudes from the top of the stomach. The condition, called long-gap esophageal atresia, affects around one in 2,500 newborns, and is fatal if left untreated. But the procedure that Jennings and his colleagues currently perform to fix it, called the Foker process, takes its own toll.

To repair the digestive tract, Jennings makes an incision in the child’s back and stitches a few tiny sutures into the end of each of the two sections of...

Jennings estimates he’s performed the surgery more than 100 times. But although he says that the procedure gets better results than transplanting a section of colon to replace the missing esophagus tissue, the need for long-term sedation doesn’t sit right with him. “The use of anesthesia in babies is very controversial now,” he says. “There’s evidence that use of the sedative drugs that are either morphine-based or benzodiazepine-based, like valium, causes some brain apoptosis . . . so we’d like to avoid them.”

The team stretched the rings about 2.5 mm farther apart each day for a week.

As it turned out, Jennings had a colleague hankering for just such a challenge. Harvard University robotics engineer Pierre Dupont was interested in creating an implant “to assist in performing physiological functions or to help heal the body,” Dupont explains. After learning about the esophageal atresia problem, he and his colleagues started working on an implantable device that could do the job of the surgeon and the sutures, but from inside the body—thus constraining the need for anesthesia to the duration of a single operation.

Building the esophageal atresia prototype presented some unique difficulties, Dupont explains, in part because any leakage of body fluids into the robot could damage the electronics or lead to infection. “Just creating something that would reliably work inside the body for multiple weeks was perhaps the biggest challenge,” he says. The team settled on a bot with a waterproof skin made of silicone rubber and a polyester mesh, and a body of electronics with two open metal rings along its side that would slowly spread apart, elongating the tissue in between the rings. The internal device connects through a cable to an external, battery-powered, wifi-capable controller on the patient’s back.

Once the device was ready to test, the team implanted its esophagus elongator into five healthy pigs, where, rather than treating esophageal atresia, the robot was tasked simply with lengthening the animals’ normally developed esophagi. The researchers initially set the rings 2 cm apart. Then, using a laptop to control the devices, the team stretched the rings about 2.5 mm farther apart each day for a week. The pigs seemed untroubled by the gizmos, and continued eating normally; the portion of their esophagi between the rings grew in length by an average of 77 percent over the course of the experiment (Sci Robot, 3:eaaq0018, 2018).

As the rings moved apart, the robots also measured the forces acting on them, and the researchers noticed that resistance in the tissue rose just after each stretching episode, then declined over the ensuing hours, apparently as new cells grew in the space between the two rings. And when the researchers later examined the geometry, composition, and density of nuclei of the sections of esophagus that had been stretched between the rings, they found them comparable to those of unstretched parts of the organ, indicating the addition of new cells rather than elongation of existing ones.“I think it’s a really exciting demonstration of how applying mechanical forces, in this case with an implantable robot, can lead to tissue regeneration,” says Harvard University engineer Conor Walsh, who was not involved in the study. The study’s combination of robot systems, tissue engineering, and bioengineering is “pretty cool to see from an interdisciplinary perspective,” he adds.

Dongwook Kim, who was also not involved in the new study, tells The Scientist that the robots’ mechanical action is a novel and impressive achievement, and stands in contrast to other implantable robotics devised to gather data or deliver electrical stimulation. Kim, a graduate student studying nanoelectronics at Korea Advanced Institute of Science and Technology in Daejeon, notes that one potential way to improve the device would be to make it smaller by powering it wirelessly rather than with a battery.

Dupont hopes a variation on the device could be used to treat a condition similar to esophageal atresia that affects the other end of the digestive tract: short bowel syndrome, in which the gut is too short to allow patients to fully process food. He and colleagues are now testing the robots’ ability to stimulate the growth of bowel tissue in pigs. As for the fate of each device, Dupont won’t reveal details at this stage, but says the researchers want find a way to engineer “the equivalent of having the whole thing disappear on us” once its work is done, so that a second surgery wouldn’t be needed to remove it.

Still, Dupont worries that overcoming this and other remaining technical challenges may be the least of the team’s problems in getting the tissue-tugging robots into patients. “I just wish there were more resources available to translate these pediatric solutions to clinical use,” he says, noting that the relatively small potential market for the device may make it difficult to raise the funds needed for commercialization. “Hopefully, we’ll get there.”