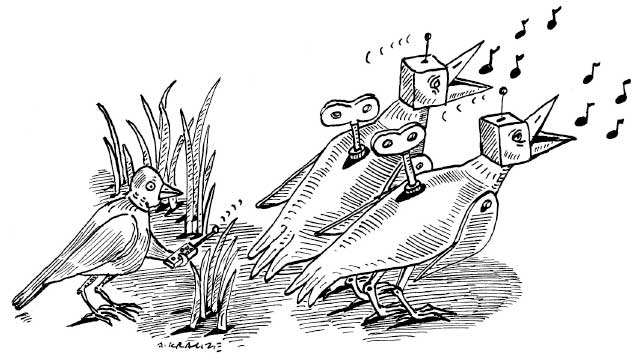 Out in the field one day observing Australian magpie-larks (Grallina cyanoleuca), bioacoustics researcher Pawel Rek heard the telltale trilling of the birds’ territorial defense duet. Magpie-lark pairs, like those of many bird species, sing coordinated duets to warn potential rivals to keep off their turf. But Rek could only spot the male of the pair. “I was really confused when I found that the female was actually sitting on the nest, on the nearby tree, and that it was only the male singing his and the female’s part,” he writes in an email.

The observation raised questions. Were rival magpie-larks actually fooled by such deceptive duets? If so, why bother with real ones? Intrigued by the fact that the male magpie-lark seemed to be hiding as it sang its deceptive song, Rek also wondered how rivals’ actually seeing the birds played into duet communication, especially...

Fortunately Rek, who has his home lab at Adam Mickiewicz University in Poland but was then on a fellowship at Australian National University (ANU) in Canberra, already had the robots on hand. The animatronic birds were made from a male and a female magpie-lark that had been found dead, taxidermied, and fitted with mechanical parts. Rek and Rob Magrath, a behavioral ecologist at ANU, had used the lifelike robots to compare magpie-larks’ reactions to silent wing-lifting displays versus displays coupled with song (Animal Behav, 117:35-42, 2016). Now Rek just needed to make some small adjustments to get the setup ready for the next experiment.

Rek’s previous studies on the magpie-larks also proved handy when it came to finding unsuspecting study participants. “When you get to know the birds, you often have a pretty good idea of where they’re likely to be,” says Magrath. For one experiment, Rek tried playing duet recordings to the birds, with no robots present. He and Magrath then counted the number of songs sung by the hoodwinked males as a measure of how threatened they felt their territories to be. The deceptive duets sung by just one bird induced male listeners to sing as effectively as real ones sung by a male-female pair (Proc Royal Soc B, 284:10.1098/rspb.2017.1774, 2017).

Because it takes two to duet, you might have thought of it as an unfakeable, honest signal of there being more than one bird present, but these guys have shown that it’s actually not that.—Mike Webster, Cornell University

The avian listeners reacted about as strongly when the recordings were accompanied by the sight of two robot birds performing corresponding displays. But they only sang about half as many songs when the recordings were accompanied by a single robot bird. “This study adds a new (specific for cooperative signals) level for the classification of multimodal signals,” Rek writes to The Scientist. “In this particular case the role of the visual component is peculiar—it informs that the message transferred by songs is honest.” Rek’s earlier observation that male birds singing “duets” alone tended to do so from hiding suggested intent to deceive.

There are other known instances of avian deception, such as deceptive alarm calls, but this is the first study to take on deceptive duets, says Mike Webster, a behavioral ecologist at Cornell University’s Lab of Ornithology who was not involved in the study. To him, the results indicate that “animals can use deceptive signaling more flexibly, and possibly more commonly, than we give them credit for. . . . Because it takes two to duet, you might have thought of it as an unfakeable, honest signal of there being more than one bird present, but these guys have shown that it’s actually not that.”

But Katherine Gentry, a behavioral ecologist at Purdue University, writes in an email to The Scientist that the recorded duets the researchers used may have been relatively unconvincing because they were played from one speaker, not two. She cites an earlier study in which magpie-larks reacted more aggressively when the male and female parts of a duet were played by separate speakers rather than just one (Behaviour, 141:741-53, 2004), and says, “it makes me wonder just how discernible the sequential-duet playbacks were from the pseudo-duet playbacks.”

Magrath says that the robo-birds were only half a meter apart in the study, and that the study subjects would likely have been unable to differentiate between the sound of a single speaker versus two placed so close together. At any rate, the difference between the birds’ reactions on seeing one robo-bird or two “occurs while keeping everything else the same, including the number of speakers,” he writes to The Scientist.

Gentry is more impressed by an observational component of the study, in which Rek and Magrath found the magpie-larks do deploy deceptive duets, and are most likely to do so during the nesting season, when pairs are often separated.

Emilie Perez, who researches animal communication at Columbia University, says the study suggests “a clear trade-off here between producing pseudo-duetting too often and risking [being] discovered as mimickers.” More broadly, she writes in an email, “this paper shows one more time that birds have very high cognitive abilities and are indeed very smart creatures.”