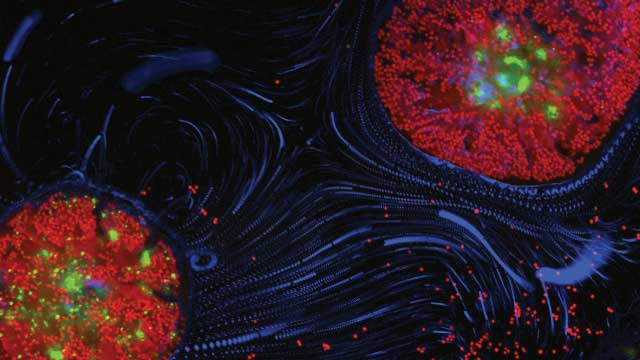 Crucial habitats in underwater ecosystems, and harbingers of the damage inflicted by global warming on the world’s oceans, coral reefs epitomize the beauty—and the fragility—of marine life. But they’re also notoriously difficult to study.

“There are all these fascinating, basic biology questions that we don’t know the answer to,” says Virginia Weis, a marine physiologist at Oregon State University. How do corals respond mechanistically to bacterial infections, for example? What exactly happens during coral bleaching? “They’re hard questions to study, because we haven’t had the cell biology and imaging capabilities.”

Getting to the bottom of these questions is becoming increasingly urgent. Reports of the worst coral bleaching...

But attempts to study corals in vivo have traditionally been hindered by the animals’ resistance to life in the lab, and cell or tissue cultures taken from whole coral colonies rarely survive more than a few weeks. Meanwhile, owing to their bulk, reef-building corals are impractical to image at a fine scale in situ or in aquaria, meaning colony-level studies lack insight into the mechanisms underlying the animals’ biology. “It’s a black box, in terms of what actual microscale processes are happening there,” says Assaf Vardi, a marine microbiologist at Israel’s Weizmann Institute of Science.

Looking at this animal, normally you just see a rock. A very beautiful and very colorful rock, but basically a rock. Seeing it at this scale, it suddenly becomes alive. It opens up a whole new way of looking into these fascinating organisms.—Orr Shapiro,
Weizmann Institute of Science

A few years ago, Vardi and his colleagues decided to take a different approach. A reef-building coral colony is made up of hundreds of tiny cnidarian polyps, each harboring an algal symbiont, and capable of laying down calcium carbonate to build a skeleton. What if, the Weizmann researchers wondered, you could capture individual polyps; recreate a miniature, experimental environment for them to grow in; and then observe the creatures, in vivo, with a microscope? Vardi and an international team of researchers set to work to develop a micro aquarium, fit to house the world’s tiniest reef.

Starting the project was relatively straightforward. In collaboration with microfluidics expert Roman Stocker of ETH in Switzerland, Vardi’s team designed a tiny chamber, consisting of a silicone elastomer channel on top of a microscope slide, with a 1-mm hole at either end of the channel to allow a constant flow of water. Then, fellow Weizmann researcher Orr Shapiro exploited a natural response to high salinity called polyp bailout—the mass ejection of polyps under stress—in order to obtain individual animals from the reef-builder Pocillopora damicornis.

The original plan was to pop a polyp into the chamber, let it settle, and slip it over a microscope lens. But that proved harder than expected. “They kept moving,” Shapiro says. “It was kind of counterintuitive. Corals are basically stationary, but these kept turning around, doing like 60 rpm. You couldn’t get any good pictures.” The polyps were beating tiny hairs called cilia, causing the animals to spin at great speed in the chamber—a finding that led to a paper on how corals influence their microenvironment via ciliary currents (PNAS, 111:13391-96, 2014).

The spinning, the researchers realized, came down to housing preferences—the polyps wouldn’t settle for just anything. “We tried a whole array of different substrates,” Shapiro says. “It turned out that they wanted specific, cheap, Chinese microscope slides. The expensive German ones didn’t work.” The team also had to optimize various environmental parameters, including the salinity, acidity, and flow rate of the water in the chamber—a process that took a considerable amount of trial and error, Shapiro says.

But the payoff was worth it. Once a polyp had settled, it could be imaged through the microscope for hours on end, using different wavelengths to view different parts of the system (Nat Commun, 7:10860, 2016). “It looks fabulous,” says Vardi. “With the red channel, you quantify the [algal] symbiont. With the green channel, you quantify the coral’s health—because of natural GFP . . . you can characterize the state that the coral is in.”

To demonstrate the setup’s potential, the team made observations of bleaching (what happens when corals expel their algal symbionts under stress), calcification (the deposition of calcium carbonate), and even interactions between two polyps. “You can see how much these polyps connect,” Shapiro says. “They start prodding each other and sending out filaments, looking around. It’s just amazing to be able to see these kinds of details.”

Of course, the system is not without drawbacks. For starters, the technique can only be used to study the early stages of coral growth: too much skeleton, and the structure becomes too opaque to image. And the conditions used to trigger polyp bailout are necessarily stressful, notes coral biologist Chris Langdon of the University of Miami. “You worry a little bit that [the polyps are] hungover from that kind of stress and might not be behaving normally,” he says. “There’s a lot of validation that needs to be done, I would say, to see how long you need for them to recover.”

Nonetheless, Weis and Langdon agree, it’s an exciting new tool. “You have to have a playground where you can fiddle around with things,” says Weis. “You can apply what you learn in those contexts to the broader, non-model real world. When you go into nature and look for signatures that you’ve seen in your playground, then you can start to understand what exactly might be happening.”

Vardi and Shapiro acknowledge that they’re only just scratching the surface with this technique. Now, their work focuses on addressing some of those physiological unknowns, such as how corals respond to infection—a process they can observe in real time by tracking labeled pathogens as they invade the polyps inside the chamber. But they also hope that other labs will take advantage of the coral-on-a-chip method to study other aspects of corals’ complex physiology and behavior—including responses to environmental stressors affecting global marine life—in unprecedented detail.

“[Looking at] this animal, normally you just see a rock,” says Shapiro. “A very beautiful and very colorful rock, but basically a rock. Seeing it at this scale, it suddenly becomes alive. It opens up a whole new way of looking into these fascinating organisms.”