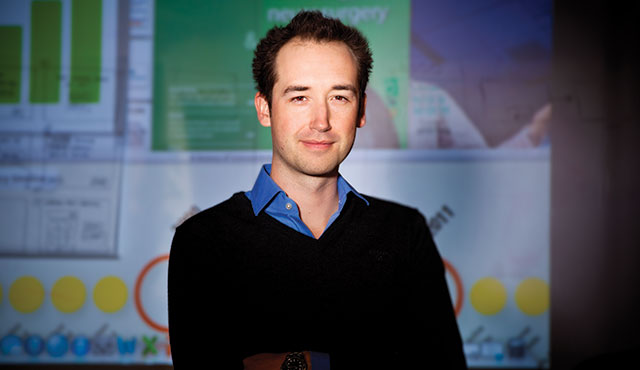 INNOVATIVE DIAGNOSIS: Paul Wicks , vice presi­dent of innovation at PatientsLikeMe, says that the PVA can change the way physicians treat their patients.PATIENTSLIKEME, INC

Parkinson’s disease could one day be monitored and managed by a 10-second phone call. At least, that’s the hope driving the Patient Voice Analysis (PVA), a collaboration between mathematician Max Little, the online community PatientsLikeMe, and nonprofit research organization Sage Bionetworks. The aim is to develop voice analysis tools that can map Parkinson’s disease progression.

Each year, about 60,000 people in the U.S. are diagnosed with Parkinson’s disease, an incurable and degenerative neurological disorder that affects movement, muscle control, and balance. The disease, which affects one in six people over the age of 60, is most often characterized by motor-related symptoms such as a resting tremor, rigidity, and slow movement with an awkward gait. These symptoms fluctuate—often in response to treatment—but gradually worsen over...

Unfortunately, because there is no definitive biomarker for Parkinson’s disease, it is notoriously difficult to monitor. “Current rating scales to map disease progression are so time-consuming, expensive, and logistically difficult to administer that they are rarely performed outside of clinical trials,” says Little, a Wellcome Trust/MIT fellow at the MIT Media Lab who is heading up the PVA.

Instead, says Paul Wicks, vice president of innovation at PatientsLikeMe, “most physicians rate patients’ Parkinson’s symptoms by observing them during intermittent office visits—giving [the doctor] very limited data on the patient’s progress in between visits or even how symptoms change during the course of the day based on the therapies a patient is receiving.”

These visits, says Codrin Lungu, chief of the National Institutes of Health Parkinson Clinic, “are just a snapshot of how they happen to be doing in the office” and often have “little relevance to how someone is doing 24-7.”

“Now, imagine we are also able to cheaply, simply, and noninvasively track disease progression through a technology as ubiquitous as a telephone,” says Little. “That’s exactly what we are trying to do through the PVA.”

“By combining these two data sets we hope to identify relationships between speech disturbances, such as voice tremors, and typical clinical signs of Parkinson’s, such a limb tremors, so that it becomes possible to monitor patients’ progression with a short phone call,” Little explains.

The PVA builds on Little’s previous effort, the Parkinson’s Voice Initiative, which used software Little developed to analyze voice recordings from almost 17,000 volunteers. Over time, the system “learned” to detect differences in voice patterns between people with Parkinson’s disease and healthy people, enabling the technology to diagnose the disease with 98.6 percent accuracy.

Originally, the PVA aimed to collect voice recordings of 10-second “aaaah” sounds from 500 people with Parkinson’s disease, along with self-reported results from the PDRS questionnaire. To date, more than 900 people have contributed voice recordings and survey results.

These data will then be de-identified and posted to Synapse, Sage’s cloud-based open-source computing environment, where it will form the basis for a computational challenge known as DREAM. The challenge concept, says Stephen Friend, Sage’s president, taps into the “collective ingenuity” of the scientific community to develop “out-of-the-box” solutions by engaging a diverse team of statisticians, machine-learning researchers, computational biologists, and others.

As in previous DREAM Challenges, participating scientists are asked to solve a specific problem—in this case, to develop an algorithm to monitor symptom severity, deteriorating function, and response to treatment in patients with Parkinson’s disease—by placing scientific data, tools, scoreboards, and the resulting predictive models into an open, online forum. The winning team will receive the right to submit a preapproved article about its successful algorithm to a prominent scientific journal.

Little says that he hopes his voice software will supplement or even replace the need for physician office visits by providing a continuous and remote means of monitoring how the disease is progressing.

Parkinson’s disease could one day be monitored and managed by a 30-second phone call.

“Think of it as a GPS for your disease that lets you and your doctor know exactly where you are,” adds Wicks.

“Having a technology that would provide feedback on disease progression on a day-to-day basis as well as over time could be very, very useful for physicians who want to monitor their patients remotely,” says Little. “This information could be used, for example, to help physicians titrate medications to better control the disease.”

Maurizio Facheris, associate director of research programs at the Michael J. Fox Foundation for Parkinson’s Research, agrees, calling the technology “promising.” And, when correlated with other personal data, such as those collected by smartphones and wearable devices, it has the potential “to form a constellation of objective markers that will advance disease management and drug development,” he says.

Little says he also expects the technology to “empower patients” who want to gain insights on how to better manage their own health.

“Giving people with Parkinson’s a clear way to see how they’re doing, in the way, for example, patients with diabetes can do through blood glucose logs would be a tremendous improvement,” says Lungu.