By a fortuitous twist of genetic fate, a small percentage of humans, roughly one in 100, are able to resist infection to HIV. Wouldn’t it be even more fortuitous if one of these exceptional people, prized by scientists as walking exemplars of what a therapy might ultimately accomplish, happened to be an AIDS researcher as well? Meet James Hoxie, director of the Penn Center for AIDS Research at the University of Pennsylvania.

“I give lots of blood and still do,” Hoxie says in his office, surround by tropical plants, books, and diagrams of viral envelope proteins. “I think I’ve been asked to give seminars at places just so people could bleed me,” he laughs.

Hoxie didn’t know he was a carrier for the crucial mutation until he had been elbow-deep into AIDS research for years. Since the mid-1980s researchers, including Hoxie’s group, had been hunting for the coreceptor on...

Robert Doms’s team at the University of Pennsylvania was one of those that successfully identified the CCR5 coreceptor in collaboration with a group in Belgium. “A cool thing then was that they started looking for mutations right away,” Doms recalls. Doctors knew some people were able to ward off infection, and Doms’s colleagues wanted to see whether CCR5 was responsible. Shortly after CCR5 was identified, so were a few people who carried a deletion in the gene—called delta32—that crippled the protein and blocked HIV entry. Doms started his own search for carriers in Philadelphia.

“I think I’ve been asked to give seminars at places just so people could bleed me.”

Hoxie remembers providing Doms’s staff a cheek swab one morning. Reaction to the results was swift. “I knew something was up when I saw five people standing outside my door in the afternoon with needles and tubes, asking for blood,” he says. It turns out Hoxie is homozygous for the mutation. Word spread quickly among the community of this new source of HIV-resistant cells.

“It’s useful for controls,” says John Moore at Cornell University, because cells with delta32 will show whether a virus is absolutely dependent on CCR5 for entry. Hoxie is often thanked at the end of papers for contributing blood. Moore sends him bottles of wine.

More than a decade later, Hoxie’s blood is still in circulation among HIV researchers. Carl June at the University of Pennsylvania includes it as a positive control in studies to manipulate the immune system of people infected with HIV, using a gene therapy technique. “In principle [we’re working to] convert people to have the same resistance that Jim does,” June says.

Hoxie occasionally taps his vein for his own controls in probing how the virus escapes the immune system. “Getting rid of CCR5 makes things simpler,” he says. Hoxie is perhaps best known for identifying HIV isolates that are able to infect immune-system cells other than CD4. His current research focuses on the basic biology and structure of viral envelope glycoproteins and how they mediate viral entrance into the cell. Ultimately he’d like to see his work contribute to an HIV vaccine.

Doms has recently extracted Hoxie’s blood and subsequently knocked out the second CD4 coreceptor, CXCR4, to create even more resistant immune-system cells, which he has transplanted into mice.

Homozygotes like Hoxie have demonstrated an immune property vital to the development of therapy: Their immune systems are still perfectly healthy, despite the absence of CCR5. In 2007 the Food and Drug Administration approved Pfizer’s CCR5 blocker, maraviroc, as an HIV drug. Moore is researching ways to use CCR5 inhibitors for preventing infection. “The importance of CCR5 plays out in all kinds of ways,” Hoxie says.

June’s approach is viral eradication—replacing an infected immune system with an uninfected one that also carries the delta32 mutation. While June is currently enrolling people in human clinical trials, in 2008 researchers in Germany took a slightly different tack to reach essentially the same endpoint. A person (known as The Berlin Patient) who was infected with HIV and also had leukemia received a bone marrow transplant from a delta32 homozygote. The patient stopped antiretroviral therapy, and the virus has not returned. “This is rocking the planet,” Hoxie says. “It’s an incredibly exciting thing.”

June says Hoxie’s willingness to roll up his sleeve and donate blood has made it convenient to do his research. “What’s more important is Jim is a great scientist,” June says. “That’s his real importance.”

A New Path for HIV Entry 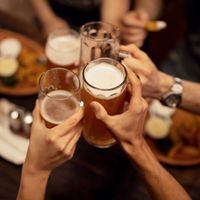