A new study ignites debate on the cause of pistachio bushy top syndrome, a disease that has crippled farms in California, Arizona, and New Mexico.

Standing in the orchard, Jennifer Randall could see something was seriously wrong. A plant pathologist and molecular biologist at New Mexico State University, Randall had traveled in late 2013 to Arizona to take a look at some of the state’s pistachio tree nurseries at the request of growers in the region. “I wanted them to send samples to me to test,” Randall tells The Scientist. “They said, ‘No, no, you really need to come see these trees.’”

When she arrived, “trees were actually falling down in the wind,” says Randall. “In Arizona, we have really high winds, but we’re talking three-year-old trees. That is unusual, for them to be falling down. Their root system just had not taken hold.” The trees were stunted, with peculiarly bushy tops and swollen tissue, or galls, on the stems. Growers explained that the rootstocks weren’t accepting scions—tree shoots grafted...

At the time, nobody had any idea what was causing the condition that would come to be known as pistachio bushy top syndrome (PBTS). Now, after years of investigation, competing hypotheses are the subject of not just lively discussion in the academic literature, but of legal disputes between growers and the pistachio nurseries that supplied them with plants. While loss estimates from the outbreak’s peak between 2011 and 2014 are yet to be finalized, “somewhere in the neighborhood of 30,000 acres have potentially been affected,” says Robert Klein, manager of the California Pistachio Research Board. The industry-run and -funded organization is overseen by the California Department of Food and Agriculture and sponsors part of Randall’s research. “Many growers who bought lots of rootstock that turned out to be affected want to be compensated for their losses.”

When Randall, her postdoc Rio Stamler, and their colleagues started analyzing the diseased pistachio trees a few years ago, they quickly ruled out some of the usual suspects. They couldn’t find phytoplasmas—known insect-borne bacterial pathogens that parasitize plants’ phloem tissue. Tests for common viruses and fungal pathogens were also negative. However, during an analysis of DNA isolated from diseased pistachio rootstock, the team did find the 16S sequences of two species of a Gram-positive bacterial genus called Rhodococcus. Both are closely related to a known plant pathogen, R. fascians, which carries a plasmid containing a handful of genes associated with virulence. 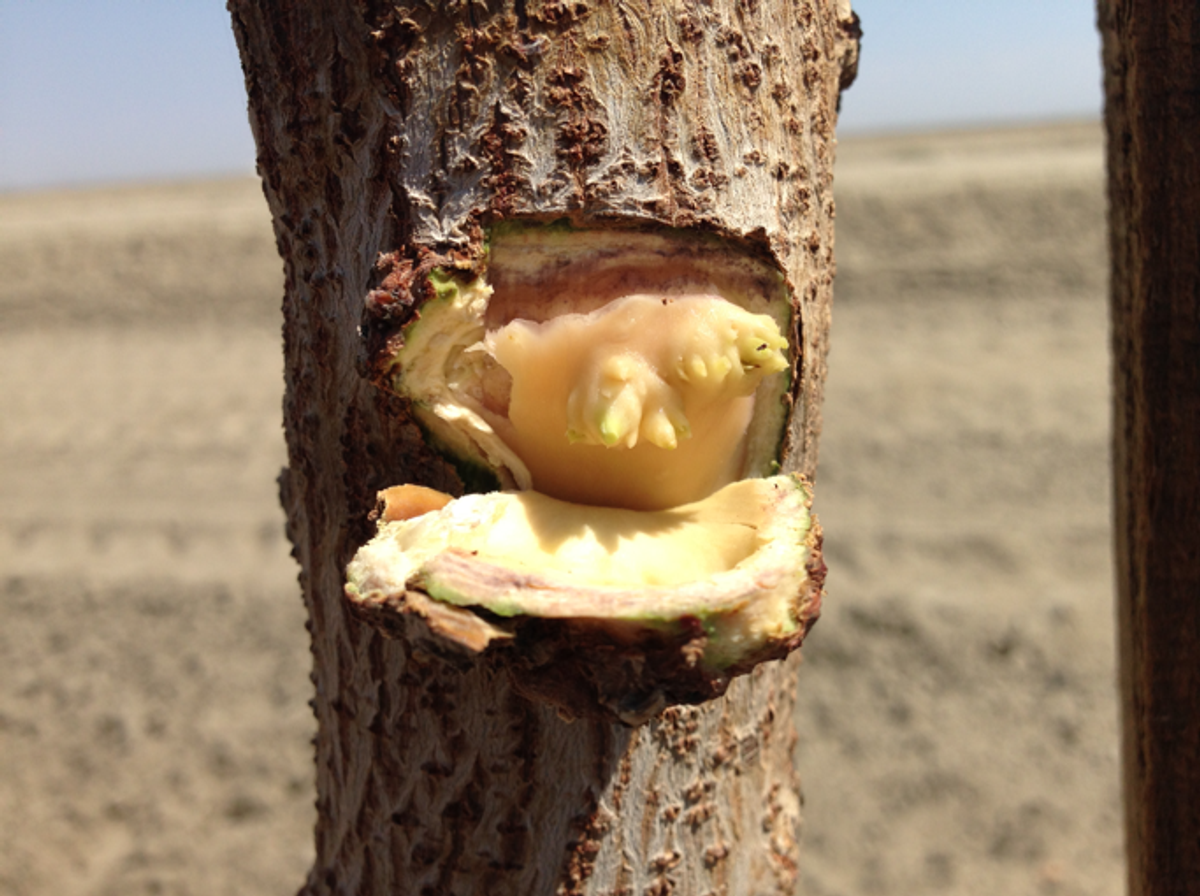 Trees with pistachio bushy top syndrome (PBTS) develop swellings, or galls, on the stem. This slice through a gall shows multiple buds developing inside.
Elizabeth Fichtner

Going back through samples of diseased pistachio from commercial nurseries and independent orchards in Arizona and California, the team consistently found these two Rhodococcus species. And when the researchers used primers designed to amplify virulence genes in R. fascians, their results indicated that one isolate had an R. fascians virulence gene, and the other carried two. Suspecting they had found the culprits, Randall and colleagues transferred some of the Rhodococcus isolates onto healthy pistachio plants. “We found that the bacteria, when we put them onto clean plants, stunted [the pistachios’] growth,” Randall says.

In 2015, the team published its results, concluding that “this organism is responsible at least in part for PBTS in California and Arizona.” The research was widely reported both before and after publication, and by the end of the year several lawsuits had sprung up from growers in California against Duarte Nursery, one of the largest suppliers of pistachio rootstock in the US. The nursery had sold plant material infected with harmful bacteria, growers argued. The matter has yet to be settled in court, and in the meantime more growers have filed suit.

By then, another team, led by plant pathologists Jeffrey Chang and Melodie Putnam at Oregon State University, had started its own project on plant-Rhodococcus interactions. “When the epidemic in pistachio occurred,” Chang says, “the group in New Mexico contacted Melodie for assistance to confirm that the symptoms they saw were due to Rhodococcus.” But the task wasn’t so simple. For starters, the pistachio plants’ symptoms were “unusual” compared to those typically seen in cases of R. fascians in woody plants, which exhibit mainly leafy galls, says Chang, whose work is primarily funded by research grants from the US Department of Agriculture. And when the researchers used diagnostic markers developed by Putnam for known R. fascians virulence genes in the two bacterial isolates taken from diseased pistachio, they couldn’t reproduce the New Mexico team’s results. Putnam’s group “was not able to detect [the genes], and neither were we,” says Chang.

Instead, the Oregon team found that strains of the bacteria that lacked virulence genes appeared to improve plant growth. When the researchers infected a healthy tobacco plant, for example, “we saw a change in root architecture—that is, an increase in root hair length and number,” Chang says. “We suspect that Rhodococcus in general—those that lack virulence genes—are beneficial.” The transition between beneficial and pathogenic was surprisingly straightforward. The researchers were able to transform friendly strains into disease-causing ones, and vice versa, simply by adding or removing a plasmid containing virulence genes, suggesting the bacteria themselves may easily switch between plant-pathogenic and -beneficial lifestyles as it suits them.

Last December, Chang and his colleagues published their findings on Rhodococcus’s beneficial effects, and on the absence of virulence genes in isolates taken from pistachio. The work had “uncovered a misdiagnosed epidemic that implicated beneficial Rhodococcus bacteria as pathogens of pistachio,” the researchers wrote. “The misdiagnosis perpetuated the unnecessary removal of trees and exacerbated economic losses.” The stunting observed in experiments by Randall’s group could probably be explained by the team’s use of particularly high inoculums of avirulent Rhodococcus, the Oregon researchers noted; true cases of PBTS were likely being caused by something else. Chang says he suspects genetic or epigenetic factors in pistachio might be involved.

Randall tells The Scientist that the Oregon group “has done really good work introducing the virulence genes back to what was an avirulent Rhodococcus.” But she and her colleagues challenge some of the paper’s claims about PBTS. In a comment published in May, they wrote that even though the Oregon team didn’t detect virulence genes in the PBTS isolates, it doesn’t mean the sequences weren’t there to begin with. When researchers grow bacteria on synthetic lab media, “the bacterium has all the requirements it needs on the plate,” Randall says. “To keep this [virulence] plasmid is rather costly, so they reproduce, minus the plasmid”—something Randall’s group has observed in isolates taken from diseased pistachio, she adds. Writing in a separate comment published in May, plant pathologist Danny Vereecke, a collaborator of Randall based at Ghent University in Belgium, also suggested plasmid loss might have occurred.

Chang’s group, which is now delving further into the relationship between plants and associated bacteria such as avirulent Rhodococcus, disputed this interpretation in another response. “This process needs to continue,” Chang tells The Scientist. “They need to publish new data, supporting their [hypothesis], and we would need to respond accordingly.”

The debate could well receive a judgment in court before then. With lawsuits against pistachio nurseries stacking up, “one of the questions in trial may be whether [PBTS] is genetic or pathogenic,” says Klein, adding that nurseries likely have insurance coverage for some scenarios and not others. “While we don’t have a good scientific answer—there are people on both sides—there’s obviously going to be a legal answer somewhere along the line.” A pressing problem for growers, too, says Klein, is how to reliably detect the disease, particularly if it’s caused by a pathogen. “If you’re going to certify nursery stock, you need to be able to detect 100 percent of the infected trees.”

Duarte Nursery President John Duarte, who has long expressed skepticism about the pathogenic explanation for PBTS given the disease’s unusual symptoms, tells The Scientist that it’s in everyone’s interest to establish the cause of the condition. “We simply want an accurate answer that’s well-founded,” he says, adding that from nursery managers’ point of view, confusion about how to treat a plant disease translates into potentially greater economic losses.

Randall, who notes that she does not intend to write another response to the Oregon group, says she’s confident that researchers will get to the bottom of the problem in time. “We have science we need to do to answer these questions,” she says. “We’ll understand what’s happening. I think it takes all of us.”