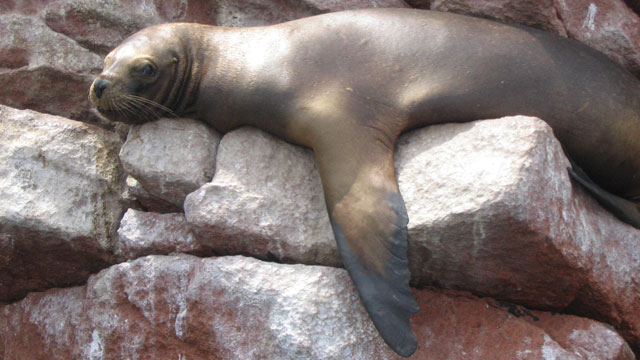 TB TRANSPORTER: Did pinnipeds like this sea lion help spread tuberculosis to the New World?SARA MARSTELLER

Sweeping high-powered jets of fresh water across the surfaces of the sea lions’ night enclosure was just another routine task for zoo workers in the Netherlands, who spent an hour or two each day sanitizing the space to keep the animals healthy. But in September 2006, a five-year-old female sea lion who had been sick for nearly 10 months succumbed to an infection; necropsy showed tubercular lesions in her kidneys, spleen, liver, lungs, and other organs. Over the next two months, six of 25 zookeepers (as well as thirteen more seals in the colony) tested positive for tuberculosis infections. Researchers surmised that the bacteria had been transmitted from the sea lion to its caretakers, perhaps by way of the urine and feces that became aerosolized during high-pressure washing; five of the infected...

The incident at the zoo was one of the earliest suggestions that tuberculosis could be transferred from marine mammals to people. But a recent study offers evidence of such transmissions occurring even earlier: researchers found DNA similar to that of Mycobacterium pinnipedii, the pinniped version of TB-causing bacteria, in the skeletal remains of 1,000-year-old native Peruvians. The ancient bones had puzzled researchers by harboring tubercular bone lesions centuries before European contact, the presumed source of TB in the New World (Nature, doi:10.1038/nature13591, 2014).

Pathogens rarely leave lasting, visible traces; marks of microbial disease degrade as their victims’ flesh decomposes. But TB bacteria, grouped together as the Mycobacterium tuberculosis complex (MBTC), create distinctive imprints of infections deep inside bones that can persist for centuries. “[Tuberculosis] is one of the diseases that we can study archaeologically better than others,” says biological anthropologist Piers Mitchell of the University of Cambridge in the U.K. “Not only does it cause classic changes to bone, it also causes characteristic lesions in the spine that nothing else creates.”

Finding such lesions in the Peruvian specimens challenged prevailing hypotheses that tuberculosis had traveled with humans from Europe to the Americas. These specimens predated that migration by half a millennium.

Anne Stone of Arizona State University and international colleagues sought an explanation in ancient DNA, applying next-generation sequencing techniques to characterize bacterial strains from the lesions. They screened samples from the lesions found in 68 skeletons; only three showed signs of bacterial DNA, and all three were older than the earliest known dates of European contact.

The researchers then compared the ancient DNA sequences to more than 200 modern MBTC genomes, a computationally constructed ancestral strain, one isolated from an 18th century Hungarian mummy, and 14 animal strains, including ones from wild chimpanzees and pinnipeds. Reconstructing the bacterial family tree revealed that the ancient Peruvian samples were more closely related to the modern strain found in seals and sea lions, M. pinnipedii, than to M. tuberculosis, which causes human disease. The results support the idea that tuberculosis in pre-Columbian South America was transmitted from pinnipeds to humans between AD700 and AD1000.

Seals and sea lions in the region could have picked the disease up from African hosts and transmitted tuberculosis across the oceans to South America, according to Stone and her coauthors.

“Previous models suggested—largely because of a lack of evidence—that there was a one-time transfer of the tuberculosis bacterium from domesticated animals to humans, and then [the disease] subsequently spread throughout the world,” says Penn State anthropologist George Milner, who was not involved with the analysis of Peruvian samples, but did serve as Stone’s doctoral research advisor. The hypothesis that tuberculosis could have been transferred across species or different groups of people at various points in time is “a more elaborate model and probably more accurate,” according to Milner.

When we realized these [strains] clustered with M. pinnipedii it was a huge surprise.—Anne Stone,
Arizona State University

Signs of such zoonotic host-jumping infections are still common. In addition to the study of zoo workers in the Netherlands, researchers have also shown that seals spread tuberculosis to cattle on coastal farms in New Zealand, perhaps through bacteria being aerosolized near the coasts (Journal of Wildlife Diseases, 50:180-87, 2014).

In the ancient world, other parasites, such as tapeworms, were also acquired when people ate infected meat, inadvertently inserting themselves into pathogen life cycles. “When people ate infected insects such as grain beetles, tapeworms that usually cycled between the beetles and rodents could jump to humans,” says environmental archaeologist Karl Reinhard of the University of Nebraska-Lincoln. “People have been hunting and using parts of sea lions directly for a long time, so it’s not surprising [that tuberculosis] would switch hosts from sea lions to humans.”

The earliest previously discovered signs of tubercular lesions in North American humans occurred two centuries after the Peruvian samples; the disease may have colonized the northern region as human settlers travelled along trade routes, or via another source. “Each [strain] might have a different story of how it gets into the human population,” says anthropologist Megan Perry of East Carolina University in Greenville, North Carolina. “That same thing could be true for other diseases as well.”

Understanding how microbial pathogens migrated across the planet is key to understanding human history, both within an ecological context and to learn how various peoples adapted to disease. “Only by studying disease in the past—seeing how we evolved not just genetically but also culturally [in order] to survive—can we understand our own ancestors and their environments,” says Mitchell. “Battles have been won and lost depending on which side could cope better with the environment.”