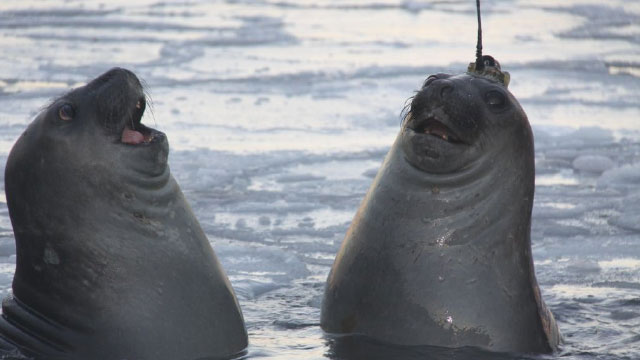 In the winter of 1999, Guy Williams took a trip to the Antarctic. A PhD student in oceanography at the University of Tasmania, he had become fascinated with the role polynyas—unfrozen expanses of water surrounded by ice—play in the cooling of large water masses at the Earth’s poles. Joining a research expedition, he travelled south from Tasmania by ship through the ice to the Mertz Glacier polynya in East Antarctica. The goal: to take measurements that would help model ocean circulation.

The survey was successful, but the voyage itself was something of an eye-opener. “I was very excited about going to Antarctica,” Williams recalls, “but I soon realized that Antarctica in wintertime is another kettle of fish. I got...

With air temperatures dipping below –20 °C, and sea ice more than a meter thick, the Antarctic winter poses a challenge to researchers collecting even basic oceanographic data, such as water conductivity (a correlate of salinity), temperature, and density (CTD). And it’s not just scientists who struggle. Technologies such as Argo floats—devices designed to sink and rise in the water column while taking measurements that are then relayed by satellite—are also hampered by ice cover, making them less practical data collectors beyond 60 degrees latitude.

But for Williams and his colleagues, data arrived from an unlikely source. A few years after that bone-chilling expedition, a serendipitous meeting with marine biologists turned up a new data set, one collected by ocean dwellers that are quickly becoming the go-to data loggers in hard-to-access parts of the world’s oceans: seals.

“These seals were carrying micro-CTD devices” to take measurements of the water around them, explains Williams, now a research fellow at the Antarctic Climate and Ecosystems Cooperative Research Center in Tasmania. “It’s really the bread and butter for oceanographers. If you have a vertical profile with these parameters, you get everything you need to know about the structure of the ocean.”

Designed by scientists at the University of St Andrews’s Sea Mammal Research Unit, the specialized telemetry tags are now routinely used around the world to track the movements of seals as they traverse marine environments. Weighing just a few hundred grams, the devices are attached to the seals’ heads using an epoxy resin glue, and remain affixed to the animal with negligible impacts until molting, which usually occurs once a year. Onboard sensors take CTD measurements and location data up to every four seconds, and send a portion of those data via satellite back to researchers’ desks whenever the animal surfaces.

“When you come into the office, you log in and see where they’ve been,” says biologist Rob Harcourt of Macquarie University, New South Wales, Australia, who collaborates with Williams to study the behavior of elephant seals. “You can see their tracks as they’re moving across the Southern Ocean and look at the vertical profiles taken on individual dives—all in beautiful colors, of course.”

Seeing an opportunity to “fill in the map” for Antarctic waters, Williams and an international team of researchers examined data collected from 2011 through 2013 by elephant seals as they visited Prydz Bay, another polynya region in East Antarctica. The group knew that the region was involved in forming cold, dense water masses that help drive the circulation of nutrients and dissolved gases around the planet’s oceans. But the seal data set revealed something more.

“We found that [glacial] ice shelves are really holding back the system,” says Williams. Freshwater input from melting ice, the data showed, hinders the production of these dense water masses—which over a long time scale, Williams says, could lead to the slowing of global ocean currents as the planet continues to warm (Nat Commun, 7:12577, 2016).

“It’s a valuable piece of the puzzle”, notes Greg Johnson, an ocean climate researcher at NOAA. He adds that for now, the seal data set provides more information on current mechanisms than on future evolution. The next step will be to create time series, he says. “If you have data for decades, you can look at variability, and, eventually, changes.”

It’s taken quite a long time to get the approach really accepted and its value appreciated, but now the ball’s rolling I think we’ve got it up to a useful speed.—Mike Fedak,
University of St Andrews

Such future data sets may also come from seals. Since 2004, several countries, including the U.S., China, and Brazil, have launched national oceanographic programs using marine mammals—particularly seals—to explore hard-to-access regions all across the globe. “It’s exactly what I wanted to see,” says St Andrews marine biologist Mike Fedak, who helped develop the now internationally used tags and has been a proponent of such collaborations since the early 2000s. “It’s taken quite a long time to get the approach really accepted and its value appreciated . . . but now the ball’s rolling I think we’ve got it up to a useful speed.”

Of course, seals can’t solve everything. They don’t swim under ice shelves, for example. To go there, oceanographers would need underwater vehicles, says Williams. And seal-collected data is “a bit of a lottery,” he adds. “You watch [the seals], and you’re wondering where they’re going to go this year. Even on a daily basis, you’re watching them, going, ‘Please turn left. I want you to go left.’”

But as one of a suite of methods, these animals are filling gaps in data sets that are critical to the accuracy of global ocean modeling. “It fits into a general momentum in oceanography now, which is to be clever about how you collect data,” notes Fedak. “It’s not all about going out with a bunch of bearded guys in jumpers and ships. I think oceanographers are only too clear now that oceanography needs this mix of data collection technologies.”

It’s a view that Williams shares. “Seals are providing data to improve the accuracy of our models” by working in complement with other methods, he says. After all, “when you’re looking at something the size of Earth,” he notes, “especially from extreme environments, you use whatever you can.”