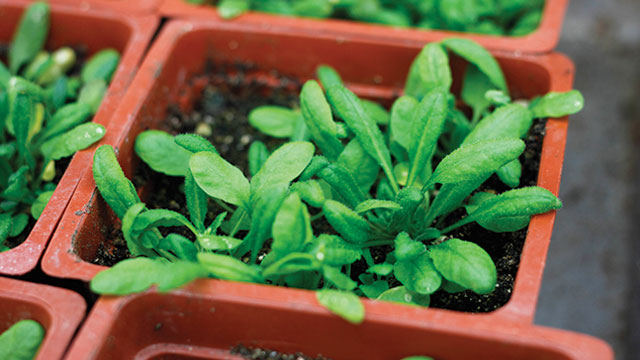 DOOMED?: Banking a narrow selection of seeds and other plant material may be insufficient in a rapidly changing climate.JUCEMBER/WIKIMEDIA COMMONS

In 2006, plant geneticist Johanna Schmitt, then of Brown University, and her colleagues set out on a massive gardening experiment that would span four countries and come to include thousands of Arabidopsis thaliana plants, millions of fruit specimens, and a lot of chocolate chip cookies. In gardens in Finland, Germany, England, and Spain, Schmitt’s team sowed Arabidopsis seeds collected from all over Europe and Asia—from as far afield as Uzbekistan, Tajikistan, and eastern Russia to sites in Western Europe and Scandinavia. The researchers were testing which seeds would fare best when grown in each of the four countries. (The cookies were later used to incentivize Brown undergraduates to manually count the small, cigar-shape fruits that grew in the gardens—every 10,000 fruits they counted earned them a treat.)   ...

The team was unknowingly collecting data that could complicate plant conservation approaches—in particular, banking seeds to later reintroduce plants whose populations have declined. It turned out that the Arabidopsis plants from southern collection sites were more fit in all the planting sites than those sites’ own native Arabidopsis varieties, especially at the northernmost sites in Finland. “We were, frankly, pretty surprised to see this,” says Schmitt, now at the University of California, Davis. She’d expected to see variation in the performance of the different plants, given that adaptation to the local environment is a well-established phenomenon. But Schmitt’s study showed what others had speculated: that climate change was already happening too quickly for evolution to keep up (PNAS, 111:7906–13, 2014).

“There’ve been a lot of papers suggesting [lagging adaptation] has been a problem, but ours has been the first to explicitly demonstrate it,” says Schmitt. In her own data, she adds, “this is the first time I saw [the effects of climate change] tangibly, so starkly.”

The results may mean that conservation efforts that employ seed banking for preservation or reintroduction face an extra challenge in anticipating and accommodating adaptation lag. For instance, if seeds had been collected decades earlier from a particular population that has since fallen behind in its adaptation to the climate, a reintroduction project might be doomed. “What our results suggest is there’s some value in preserving genetic variety from across the species range,” says Schmitt.

“In theory, it would be possible; in practice, it’s probably unachievable because of the huge effort,” says Wolfgang Stuppy, a seed morphologist at the Millennium Seed Bank Partnership at the Royal Botanic Gardens in the U.K. The partnership is the largest conservation program of its kind in the world, aiming to bank 75,000 plant species—25 percent of the world’s flora—by 2020. Collecting such a massive number of species is a mammoth project in itself, and multiplying it to include a variety of regional genotypes is not feasible, he says.

If you’re collecting things, perhaps you should be focusing on collecting genotypes from what you think the climate will be.—­Leonie Moyle,
Indiana University Bloomington

Stuppy admits that adaptation lag could complicate reintroduction efforts, which incorporate predictive models of climate and plant fitness to determine if a species might succeed at a particular locale. Adaptation lag is especially worrisome for plants with long generation times, such as trees. (Arabidopsis is an annual.) One way for seed banks to buffer against adaptation lag in the face of climate change might be to refrain from collecting specimens from colder northern latitudes, says Leonie Moyle, who studies the genetic basis of plant adaptation at Indiana University Bloomington. But even that is too simplistic, she adds, given that climate change is not unidirectional. “The take-home message is if you’re collecting things, perhaps you should be focusing on collecting genotypes from what you think the climate will be. That’s very difficult.”

Juliette de Meaux, who researches the molecular basis of adaptation in Arabidopsis at the University of Münster in Germany, says the evidence for lagging adaptation “supports the idea that, actually, seed banks will not provide a solution because the things we store are not the things that are adapted” to future climate scenarios. Instead, she says, policies to preserve species should be based on protecting biodiversity. “[We] have to maintain populations in situ... making sure that evolutionary processes can still happen.” But just like banking a vast diversity of plant genotypes, it might be easier said than done.