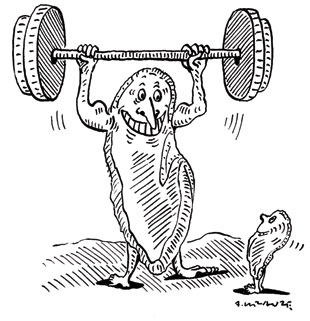 ANDRZEJ KRAUZEIn 1988, when evolutionary biologist Richard Lenski was an assistant professor at the University of California, Irvine, he started a simple experiment: toss E. coli into a new environment and watch what happens. He wanted to know how reproducible evolution would be, so he put the same strain of the bacteria into 12 flasks with the same simple medium and waited to see how they would evolve. E. coli normally lives in the guts of animals, so the experiment would allow for a way to observe adaptations to a new environment.

After about a year and 2,000 E. coli generations, Lenski and his colleagues published the first results of what they then considered to be a long-term experiment in evolution. Little did they know that 25 years and 50,000 generations later, the experiment would still be chugging along—those 12 flasks representing alternate universes of bacterial existence. “I...

These experiments provide us with clear evidence that adaptive evolution truly is relentless.—­John Thompson,
University of California, Santa Cruz

In his latest publication on the experiment, Lenski reported that the bacteria continually become more fit. His team pitted bacteria from various evolutionary time points (from each flask, a sample is frozen every 500 generations) against one another to see which would grow better when combined in the same container. “I like to think of this project as time travel because we’re comparing organisms that lived at different points in the past, resurrecting them, and comparing them head to head,” says Lenski.

Lenski and his collaborators can distinguish the competitor populations from different flasks  because of color-coded genetic markers. For instance, they would pit a sample taken from one flask of red bacteria at 50,000 generations against an ancestral sample from another flask housing white bacteria. To make sure the resurrected bacteria weren’t at a dis-advantage, they would give the organisms time to acclimate after being thawed. Lenski’s team found that bacteria that had evolved for a greater length of time—those from later generations—appeared more fit than those resurrected from earlier generations; fitness never peaked (Science, 342:1364-67, 2013). Their data suggest that, at least in this situation, evolutionary fitness is ever increasing.

Rees Kassen of the University of Ottawa says the most interesting finding is that most adaptations happened early on in the experiment. “That means [initially] there are lots of opportunities for [the bacteria] to get better,” he says. “Even though beneficial mutations are still very rare events, there are still different ways they could get better, and they also are likely to improve fitness by a large amount.”

The results came as a surprise to Lenski, who expected fitness to plateau. It’s not the first time his bacterial cells have proven unpredictable, such as when they began to utilize a new food source. In 2008, one of the strains evolved to metabolize citrate, which is ordinarily just a buffer in the medium. “It was a quantum leap in the evolution of this species, and it was totally unexpected,” says Tadeusz Kawecki of the University of Lausanne.

John Thompson, an evolutionary biologist at the University of California, Santa Cruz, says that the results show there are many adaptive solutions, even in a simple environment. “It is, then, no wonder that life has evolved to be so diverse,” Thompson writes in an e-mail. “That does not mean, though, that all populations in nature will always continually evolve increases in adaptation.” In cases where the environment is changing rapidly, for instance, slow increases in fitness will not be able to continue.

The finding contradicts the “naive” view that an organism will cease getting fitter once it’s well adapted to an environment, says Kassen. Without Lenski’s experiment, there wouldn’t be much empirical data to show that. “The fact of the matter is, it’s the only experiment we can test,” he says. “No other experiments have gone on as long.”

Although there are other experimental evolution projects, and Lenski’s was not the first, it is arguably the most important. “The great thing about these bacteria—and I have a great envy—is that [the researchers] can freeze the samples at any time and revive them so they can compete the evolved strain with the ancestors,” says Kawecki, who studies evolution in Drosophila.

The long-term evolution project is extremely simple, but it isn’t without careful planning and a huge effort on the part of Lenski’s lab. Over the years, three lab technicians in succession have served as stewards of the flasks, having to coordinate care over weekends, holidays, and even a move from California to Lenski’s current post at Michigan State University in Lansing. Now in his late 50s, Lenski is thinking about ways to continue the experiment. After all, there’s no telling what the bacteria might come up with in the future. As Thompson says, “These experiments provide us with clear evidence that adaptive evolution truly is relentless.”