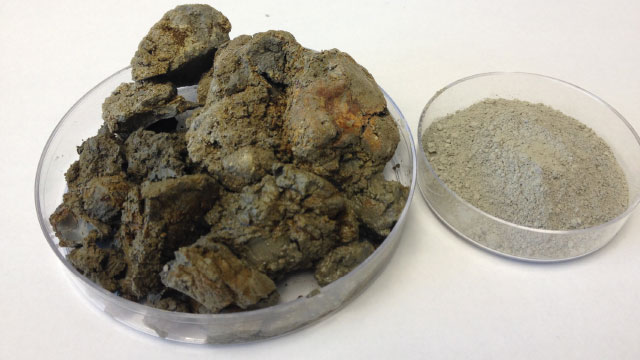 About three years ago, University of British Columbia (UBC) microbiologist Julian Davies hosted an unusual meeting in his lab in Vancouver, Canada. The visitors explained that they had recently acquired the rights to a clay deposit 250 miles north, on the edge of the Kisameet Basin, which is within territory belonging to a group of native, or First Nations, people, the Heiltsuk. The owners of the deposit planned to use the clay to create and sell cosmetics through their company, Kisameet Glacial Clay Inc., they said. They also speculated, based on scientific and medical reports about the clay published in the 1940s and ’50s, that the clay had antimicrobial properties, and wondered if Davies would be willing to look into it. “This sounds like quackery, a little bit,” Davies remembers...

But the visitors, including the company president, Lawry Lund, told Davies that the Heiltsuk people had used the clay for healing purposes for many years and that doctors and scientists had published reports of its effectiveness for diverse medical applications in the 1950s. Davies’s interest was piqued. With funding primarily from the company, he and his team began testing the clay as an antibiotic against various bacteria. “It’s been almost all surprises since then,” he says. Solutions of the clay can kill 16 different strains of multidrug-resistant bacteria that commonly infect hospital patients, the group reported in a recent study.

This is a kind of mineral that has activity against the majority of bugs, gram-positive and gram-negative, even the resistant ones.—Matteo Bassetti,
Santa Maria Misericordia University Hospital

“I believe it’s very interesting, because this is a kind of mineral that has activity against the majority of bugs, gram-positive and gram-negative, even the resistant ones,” says Matteo Bassetti, director of the Infectious Disease Clinic at Santa Maria Misericordia University Hospital, in Udine, Italy, who was not involved in Davies’s work.

The clay is effective against the so-called ESKAPE bacteria; ESKAPE is an acronym for Enterococcus faecium, Staphylococcus aureus, Klebsiella pneumoniae, Acinetobacter baumannii, Pseudomonas aeruginosa, and various Enterobacter species, which as a group cause most hospital infections and are resistant to current antimicrobials of choice.

Kisameet clay (KC) “displayed potent antibacterial activity in lab tests against a panel of highly antibiotic-resistant bacteria,” says David Weiss, director of the Emory Antibiotic Resistance Center in Atlanta, Georgia, who was not involved in the work. “These are exciting results that highlight the potential of KC to be used to treat resistant bacteria.”

Michael Mahan, who researches bacterial pathogenesis and host immune responses at the University of California, Santa Barbara, and was also not involved in Davies’s work, agrees. Davies’s results provide “new hope in a battle that the medical community is currently not winning,” he told The Scientist in an email.

Research on KC dates back 70 years. In 1946, in the Bulletin of the Vancouver Medical Association, a pair of UBC chemists reported on the composition and curative properties of the clay (22:230-37). They mentioned that a local company was selling the clay as a product called Ray-Vite and a water-based formulation as Absor-Vite, “a smooth, creamy preparation of a bluish gray color” meant to be taken orally. In several individual cases, the researchers reported, Absor-Vite seemed to relieve symptoms of digestive-system ulcers. And solutions of Absor-Vite exhibited antibacterial activity in the lab. The report also mentioned Ray-Vite’s effectiveness for external use as an anesthetic and to treat burns. In a 1952 meeting presentation, MIT chemist Ernst Hauser further described the physical properties of KC, mentioning that the Heiltsuk had used the clay for medicinal purposes for generations.

In the past, the Heiltsuk people used KC both topically and orally, according to a traditional use study on which Lund’s company collaborated with the Heiltsuk Integrated Resource Management Department. “The practice seemed to have stopped, but interest is once again developing,” he told The Scientist in an email.

Davies’s team incubated different types of ESKAPE bacteria, gathered from two hospitals and a wastewater treatment plant, with an aqueous suspension of sterilized clay dust and plated out the bacteria to test viability. By 24 hours of incubation with the clay solution, the concentrations of viable bacteria had fallen below detectable limits for all of the broad ESKAPE groups save E. faecium, which took 48 hours to kill off. Populations of control bacteria, incubated with water only, also declined but did not die out altogether (mBio, 7:e01842-15, 2016).

In the future, the clay could possibly be used to treat various conditions and infections, Davies says, including those of the skin and intestinal tract. Before tests of specific applications can happen, “there’s one big question that remains to be answered, and that is: Does the clay have any toxicity?” Davies says he and his group are pursuing those tests, starting in animals.

“There is a long road ahead to possibly using KC to treat resistant infections,” Weiss adds.

Meanwhile, Kisameet Glacial Clay began advertising the clay as a product called Kisolite several years ago with cosmetic applications in mind. But after Davies’s research revealed the clay’s antibacterial promise, the company decided to hold off on selling Kisolite, Lund told The Scientist in mid-March; rather, it is waiting to determine its most appropriate uses.