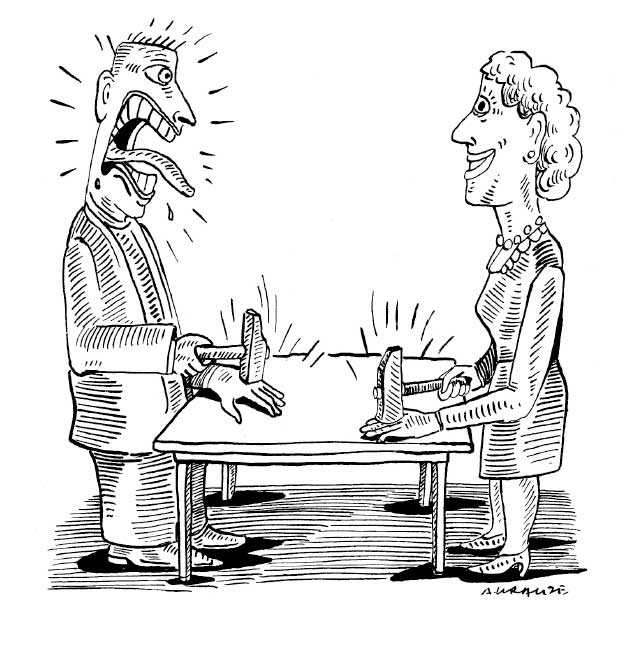 Graduate student Anne Murphy had run out of rats. Or rather, she’d run out of male rats, the animals she was using to study brain regions involved in pain modulation for her PhD at the University of Cincinnati in the early 1990s. At a time when neuroscientists almost exclusively used male animals for research, what Murphy did next was unusual: she used a female rat instead.

“I had the hardest time to get the female to go under the anesthesia; she wasn’t acting right,” Murphy says. Her advisor’s explanation? “‘Well, you know those females, they have hormones, and those hormones are always fluctuating and they’re so variable,’” Murphy recalls. The comments struck a nerve. “It really got to me,” she says. “I’m a female. I have hormones that fluctuate. . . . It made me determined to investigate the differences between males and females in terms of...

Her decision was timely. Since the ’90s, evidence has been accumulating to suggest that not only do women experience a higher incidence of chronic pain syndromes than men do—fibromyalgia and interstitial cystitis, for example—females also generally report higher pain intensities. Additionally, Murphy notes, a handful of clinical studies has suggested that women require higher doses of opioid pain medications such as morphine for comparable analgesia; plus, they experience worse side effects and a higher risk of addiction.

Although the explanations for sex differences in pain are still a topic of considerable scientific uncertainty, Murphy, now a professor at Georgia State University, has been working with her lab to clarify the picture by teasing out some of the neurological mechanisms underlying pain’s alleviation. As part of this work, one of Murphy’s graduate students, Hillary Doyle, recently carried out a project to look for predictors of morphine’s effectiveness in healthy rats in a brain region called the periaqueductal gray (PAG)—a key pain-response control center. In the PAG, as in many other parts of the body, morphine binds to μ opioid receptors and triggers signaling pathways to kill pain. Studies have shown that female rodents receiving the drug via direct PAG injection need at least 10 times more morphine than males do in order to achieve comparable levels of analgesia.

But previous work by Murphy’s lab and others suggested that morphine can also act through another mechanism in the PAG by binding to protein receptors expressed on microglia—specialized immune cells implicated in neuropathic pain (see "Glial Ties to Persistent Pain"). This binding triggers inflammatory pathways that, paradoxically, work against the drug’s analgesic effects. If females possessed higher microglia densities, Murphy and Doyle hypothesized, then their brains might be more susceptible to the inflammatory effects of morphine and less responsive to the drug’s intended analgesia.

When the researchers looked, however, they found that male and female rats showed similar densities of microglia in the PAG. But studying the cells themselves, Doyle identified a different sort of variation. Microglia in different states of activation look different under the microscope, she tells The Scientist. Resting microglia have what’s called a “ramified” structure, where arm-like processes extend from the cell body; activated microglia, by contrast, have a round, amoeboid structure. “We see a much greater percentage of active-type microglia in females than in males,” says Doyle, now a medical associate at the Scienomics Group, a health and science communications consulting company. “These were changes specific to regions involved in pain, like the PAG.”

Sex differences in morphine responsiveness, then, might result partly from fundamental differences in baseline microglial activity, not density. Sure enough, Murphy’s team found that the percentage of microglia in an active state in a rat’s PAG correlated with the amount of morphine needed to render the animal indifferent to a thermally painful light beam aimed at a hind paw. What’s more, when the researchers administered drugs to block the inflammatory pathways triggered by microglia, they found that sex differences in these responses disappeared: females no longer needed substantially higher doses for the same analgesic effect (J Neurosci, 37:3202-14, 2017).

“It’s a beautiful example of mechanisms differing in males and females,” says Alan Gintzler, a biochemist and neurobiologist at the State University of New York Downstate Medical Center who was not involved with the work. His own lab has also been documenting sex differences in pain, in particular, in the spinal cord. For example, the group has found that female rats require combined activation of both μ and Κ opioid receptors in their spinal cords for morphine analgesia, and often express the proteins as a single complex; males, by contrast, require only μ activation and show much lower levels of the heterodimer (PNAS, 107:20115-19, 2010).

The hope, Murphy notes, is that one day, with enhanced understanding of the biology of pain in both sexes, researchers might design better drugs to specifically target pathways that induce analgesia. Her group is currently working on compounds that could effectively block microglia activation, for example. “Ultimately, [these studies] could point the way to developing more-specific and targeted pharmacotherapies,” Gintzler says. Such therapies would “target certain pathways, or certain cells, that are more active in males or females—rather than bathing the entire nervous system in a narcotic.”

But Gintzler also notes that the backdrop to such work is highly complicated. For one thing, researchers are divided on whether women really do need more morphine than men do—some studies suggest they require less, or about the same amount—clouding the human relevance of the Georgia State team’s most recent findings in rats. For another, researchers have proposed alternative explanations for sex differences in human pain processing and alleviation that have no obvious links with the PAG. One famous study, published in the early 2000s, found that after taking into account people’s “gender role expectations”—beliefs about whether men should express feeling pain, for example—once-significant sex differences in pain threshold disappeared (Pain, 96:335-42, 2002).

Although there are important differences in the way such studies are carried out—in rodents or humans, in models of chronic or acute pain, in studies of pain sensitivity or pain alleviation—this tangle of vying explanations for sex differences in pain research points to a larger confusion in the field, says Jeffrey Mogil, a neuroscientist at McGill University. “You would imagine that [each of these theories] would take a little chunk out of the sex difference and reduce it somewhat,” he says. “But that’s not what all these studies show. . . . They’re all ‘complete’ explanations.”

Of course, it’s conceivable, Mogil adds, that multiple factors—spanning the range from molecular biology to culture—act in series, in which case blocking any one factor could substantially reduce sex differences in humans’ pain experiences. For now, though, he suggests that the most important finding from studies like Murphy’s is simply that qualitative differences exist and warrant further study.

“It doesn’t matter what direction the sex differences go in and how they’re resolved,” Mogil says. “This is a wonky scientific question that scientists will figure out eventually. The bigger picture is: there are sex differences here, and no one would have seen them if they weren’t [conducting research with] both sexes.”