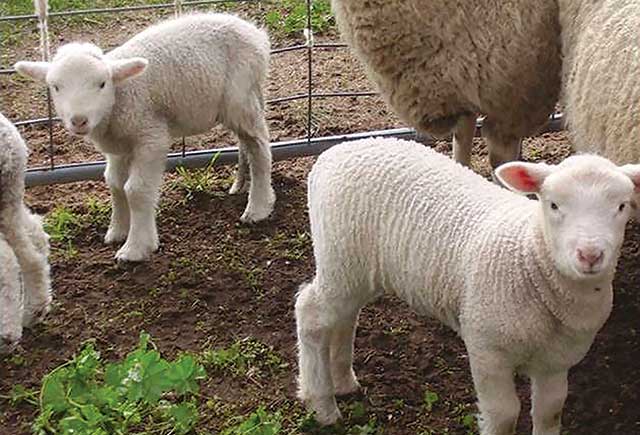 IN TWO SHAKES: Two Australian lambs, one healthy, (right) and one with the biliary atresia-like syndrome (left)STEVE WHITTAKER

In 1988, Peter Windsor, then a veterinary pathologist for the New South Wales Department of Agriculture in Australia, received a call from a field veterinarian about several hundred newborn lambs that had died on a farm in a hilly region of the state near the Burrinjuck Dam. All of the lambs had been producing white feces and died within a few weeks of being born. Windsor asked to examine some of the animals, and upon post-mortem analysis of at least a dozen, “we found they didn’t have any gall bladders and their livers were already starting to develop early signs of cirrhosis,” he says. “This was new to me.”

But the pattern wasn’t entirely new to Australian farmers. In 1964, livestock had suffered a similar die-off with the same...

The cause of biliary atresia in humans, like the reason for the lamb die-off, was unknown. But Windsor had a hunch.

“The nature of the outbreak suggested there was a toxic cause rather than an inherited cause,” says Windsor, given how many lambs died all at once. Another big clue was the weather: in 1964 and in 1988, a drought sapped New South Wales dry. Farmers and veterinarians suspected that a particular plant of the genus Dysphania—commonly known as pigweed—was to blame for the lamb deaths. The sheep, pregnant ewes included, only grazed on it during drought, when the plant popped up in spots normally covered in water. “Nature was trying to tell us something important,” says Windsor. But it would be another 20 years before he could figure it out.

In the meantime, the clinical biliary atresia field became aware of the Australian livestock die-offs in 1964 and 1988. Doctors were intrigued that perhaps the agricultural calamity held some clues to what causes the condition in kids. “The story of these findings was talked about at every lecture you’d hear about biliary atresia,” says Rebecca Wells, who studies biliary atresia at the University of Pennsylvania. Yet no one investigated further.

Then, in 2007, another drought struck New South Wales, and 50 newborn lambs died from among a herd that had grazed on dry river flats where Dysphania was growing. Wells contacted Windsor, now at the University of Sydney, and field veterinarian Stephen Whittaker, who had diagnosed the lambs. In 2008, as the drought persisted in drying up pasturelands and riverbanks in the same region, Whittaker and Windsor collected Dysphania and sent it to Philadelphia, where chemists isolated compounds from the plant.

To screen the compounds for bile-duct toxicity, Michael Pack’s team at Penn exposed zebrafish larvae to various chemical fractions from Dysphania. In his model, the fish swallowed fluorescent phospholipids so researchers could visualize how they travelled through the digestive system. “If there was a toxin, you wouldn’t see it travel to the gall bladder because the ducts would be blocked,” says Pack. Sure enough, one of the chemical fractions blocked the fluorescent phospholipids. Multiple rounds of subfractionating and screening eventually fingered the culprit: a compound the team dubbed biliatresone (Science Translational Medicine, 7:286ra67, 2015). The chemical did not affect any other tissues of the body.

They finally had a smoking gun for the lamb die-off. It’s not the first time a weather-related event has led to toxic changes in the diets of livestock. During the 1950s, a high proportion of sheep in certain herds in the Rocky Mountains were giving birth to lambs with a striking malformation: a single eye, centered in the middle of their foreheads. It turned out that drought had forced the ewes to higher elevations, where they grazed on California corn lily (Veratrum californicum), which produces a chemical called cyclopamine that interrupts the hedgehog pathway, a cellular signaling cascade whose proper functioning is essential for animal development.

Wells says her group won’t do experiments in sheep to show for sure that biliatresone in Dysphania was responsible for the Australian lambs’ deaths. Farmers who had been affected now prevent their pregnant animals from grazing on the plant, and biliary atresia has not afflicted any more lambs, according to Windsor. The question now is whether there’s any link between the plant chemical and the human disease.

Although there are no data in humans to support a toxic link yet, “there’s always been a speculation that it is possible,” says Jorge Bezerra, a biliary atresia expert at Cincinnati Children’s Hospital. “We do know that systematic analyses of tissues and serum of humans have been helpful in identifying viruses and genetic associations, but there is still a substantial percentage of the overall cohort that cannot be assigned to either of those two agents.”

“I think this is such a ripe area for investigation to see if there’s really any relationship of this toxin to human biliary atresia,” says Ronald Sokol, chief of pediatric gastroenterology, hepatology, and nutrition at Children’s Hospital Colorado and the University of Colorado. “If there is, there may be some new potential for an intervention to prevent biliary atresia.” So far, no one has found a link. “What needs to be done is to look at infants themselves and their mothers to find any evidence of a toxin,” Sokol says.

Wells says the next step for her group is to isolate enough of the compound so it can be tested in mice. This summer, Windsor brought 10 pounds of pigweed to the U.S. “I’ve got another 10 pounds sitting in my freezer at home. So we have plenty of toxin.” He says he’s excited to see what his colleagues discover on the human side of things. Cracking the lamb mystery was extremely satisfying, Windsor adds. “We always knew there was an important discovery to be made like this. This is one of those ones I was hoping in my lifetime we would solve.”