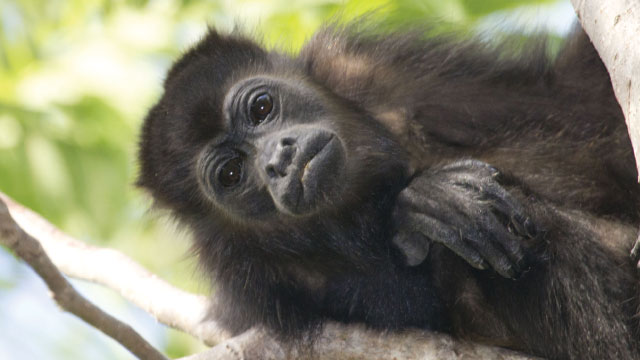 HOWLERS DOWN: A female howler (Alouatta palliata) peers down from the canopy in a Nicaraguan forest.HAL BRINDLEY

In late September, Kimberly Williams-Guillén, an assistant professor at the University of Washington Bothell and a conservation scientist for the Nicaraguan environmental NGO Paso Pacífico, received a report that a handful of howler monkeys (genus Alouatta) had been found dead at an ecoresort in Nicaragua. Bizarrely, the monkeys showed no signs of trauma or disease. “They seemed to be in fairly good condition,” she recalls.

Over the next couple of months, Williams-Guillén and her colleagues continued to receive news that howler monkeys were dying. Then, around mid-January, the reports really started to flood in. Landowners, farmers, and other members of local communities in southwestern Nicaragua were all finding dead howler monkeys. Soon, the researchers began hearing of howler monkeys dying in certain areas of Ecuador and...

When it became clear that the die-offs were not just an isolated incident, Williams-Guillén hopped on a plane to Nicaragua to see for herself. “I saw many healthy-looking monkeys, but I also saw many visibly unwell monkeys,” she says. “They were thin and very lethargic, often solitary and nonresponsive. There were several that I was able to walk up to and grab them out of a bush.” Some witnesses reported seeing monkeys convulsing as if they were having seizures.

Although the mortality rate seems to have slowed since mid-February, the researchers are anxious to understand what’s going on. Williams-Guillén speculates that the deaths may be linked to the drought that has struck Nicaragua and other areas of Central and South America this year. “The deaths are all really concentrated in the areas worst hit by drought,” she says. “Even just going to the other side of the mountain, where it’s slightly more humid, there’s a lot fewer deaths, and there’s visibly more potential howler monkey food, whereas the areas that have the highest rates of mortality, the trees are just bare—there’s hardly a leaf or flower to be eaten.”

They were thin and very lethargic, often solitary and nonresponsive. There were several that I was able to walk up to and grab
them out of a bush.—Kimberly Williams-Guil­lén,
University of Washington Bothell

Kenneth Glander of Duke University agrees that limited food availability is likely a contributing factor, though the cause of death may not be starvation per se. Rather, the lack of food may drive the monkeys to consume plants with high levels of certain toxins that aren’t part of their normal diet. In the 1970s, Glander witnessed a handful of dead or dying howler monkeys in Costa Rica, including two that displayed convulsions similar to those reported in Nicaraguan monkeys this year. “When we did autopsies on them, I was able to determine [that] their stomachs were full of leaves that they’d never eaten before.” He then collected a sample of those leaves from trees at his study site and brought them back to Duke for analysis, finding that they were chock-full of toxic alkaloids.

A good test of this hypothesis would be to see how other animals in the areas are faring, says Pedro Américo Dias of the University of Veracruz in Mexico. “If there are no reports of deaths in other frugivorous primates and other frugivorous animals, perhaps [food availability] doesn’t have to do with it,” he says. There haven’t been reports of unusual deaths in other monkey species so far, says Katharine Milton of the University of California, Berkeley, but because howler monkeys are by far the most abundant monkey species at many sites in Central America, die-offs in their populations might be most obvious. “Death in howlers might be noticed in particular, especially if other monkey species were scarce and low in number.” 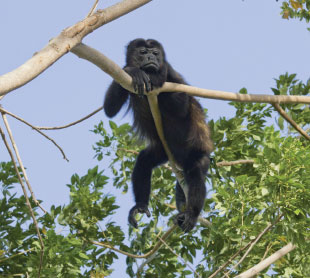 HANGING IN THERE: Researchers are struggling to determine why members of howler monkey species, such as Alouatta palliata (above), are dying in such great numbers in Nicaragua.HAL BRINDLEYAnother possible cause for the howler monkey die-offs is disease. Although Nicaragua is currently believed to be free of yellow fever, Dias points out that outbreaks of the viral disease devastated howler monkey populations in the late 1940s and into the 1950s. Some researchers even speculate that yellow fever may be a cause of the relatively low genetic diversity among Central American howler monkeys, Dias says. “Yellow fever in the past could have caused important bottlenecks.”

Williams-Guillén thinks that disease is an unlikely cause of the recent monkey deaths, however. While she and her colleagues are still waiting to export blood and tissue samples to US labs for further analysis, she notes that a Nicaraguan researcher has done virus diagnostics on some of the samples. And so far none have tested positive for yellow fever, Zika, chikungunya, or dengue viruses. “Between that and the lack of any necrosis of the liver in the dead animals, [disease] is unlikely,” Williams-Guillén says.

In addition to monitoring animals in the affected areas and continuing to collect samples when possible, the team is reaching out to primatologists in unaffected areas within the monkeys’ range that might serve as good control sites, and to establish protocols for collecting data so that the information is comparable across sites. “I think this is a really critical component,” says Williams-Guillén’s colleague Liliana Cortés Ortiz, an evolutionary primatologist at the University of Michigan. Dias, for one, has agreed to share data from his study sites in Mexico, where no howler monkey deaths have been reported.

For now, however, the cause of the recent howler monkey deaths remains a mystery. Williams-Guillén suspects that no one hypothesis will be correct. “There’s probably an interaction of factors,” she says. “Animals that might have had some clinical or secondary infections that normally aren’t that problematic. . . got into a situation where they were extremely food- and water-stressed, and that might have been enough to tip them into mortality.”